International cotton prices continued their downward trajectory in October, under the lead of a falling (though persistently volatile) New York futures market. The Cotlook A Index reached its high point for the period, of 106.65 US cents per lb, on October 12, and fell to a low of 89.50 by the end of the month. That represents a level not seen since August last year, and a decline of over 48 percent from the Index’s recent high point in early May. 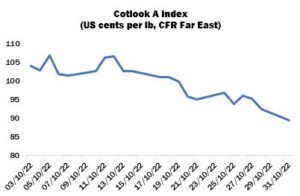 The gloomy macro-economic outlook continued to weigh on price sentiment, as impending recession and runaway inflation further impacted consumer confidence in many of the world’s major economies. Reports from spinners lamented the persistently slow pace of downstream orders and rising yarn inventories, at the same time that mills were receiving delayed deliveries of high-priced cotton bought much earlier. In general, mill demand was therefore at a low ebb for much of the period in view.

The major exception to the lack of import buying during October continued to be the Indian subcontinent, where mills in Pakistan and (to a lesser extent) those in Bangladesh showed a fairly consistent demand for lots available nearby, as well as more sporadic purchases of cotton further forward. However, as the month progressed it became clear that mills were buying largely in an attempt to reduce the average cost of their inventories, rather than in response to any noteworthy improvement in the business climate.

So far, downstream trade data have largely failed to convey the stagnation reported from all levels of the mill sector – for example, Bangladesh’s earnings from ready-made garment exports during October were robust at US$3.7 billion. However, the rate of growth is slowing month-on-month, and anecdotal reports of very weak apparel orders do not bode well for the numbers in the remainder of the year.

One bright spot in the trade landscape during October concerned the last US export sales report of the month, in which China was named as the major destination, with a net increase to upland commitments of 122,000 running bales (500 lbs). Much of that business was attributed to the utilisation of import quota before such time had passed as to make arrival before the relevant deadline untenable. Chinese buyers were prompted not only by the threat of losing out when quota is allocated next year (for Beijing operates on something of a ‘use it or lose it’ system), but also by the fact that the discrepancy between global and Chinese prices was at its narrowest for many months.

The country remains the major destination in terms of market share, accounting for 22 percent of total US upland commitments, but still largely as a result of the sizeable volume of unshipped sales that were carried over from last season, rather than a fresh bout of purchasing in recent months. In fact, during the seven weeks prior to the October 27 export report, China had actually recorded a net reduction to its overall upland commitment, of around 32,000 running bales. Overall, the outlook for Chinese import demand this season is not viewed with any great optimism, as the domestic textile economy continues to be affected by Covid related measures, and local supplies are abundant. There remains a sizeable carryover from the domestic 2021/22 crop and forecasts of the new crop, ginning of which is in full swing, have been tending higher. 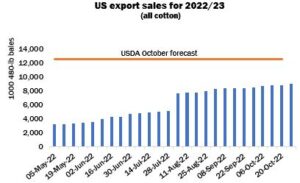 Meanwhile, sales of domestic cotton to China’s State Reserve during the month were rather more active, at 21,200 tonnes (versus less than 3,000 tonnes in September). The total volume purchased by the Reserve by the end of October was more than 80,000 tonnes, but not of a magnitude to alter the overall dynamics of supply and demand on the local market 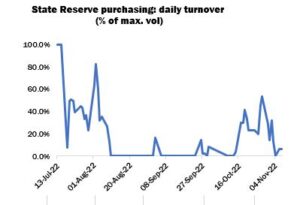 The major changes to Cotlook’s assessment of global supply and demand during October concerned consumption, in which figures for many of the key markets underwent sizeable reductions.In view of the situation described above, significant cuts were made to our numbers for the Indian subcontinent, China, and Vietnam, among others, to place the global figure at 23,809,000 tonnes, almost four percent below 2021/22, and the lowest since the 2019/20 season, when disruption caused by Covid was at its height.

As for production, our number was placed in October at slightly more than 24.8 million tonnes, reflecting a modest reduction on the month. Falls for several Northern Hemisphere producing countries (including somein the African Franc Zone, where insect pressures have emerged) were partially offset by a major increase for Brazil, where planting is some months away. The increase for Brazil was informed by the first official forecast of that country’s 2022/23 crop, placed at over 2.9 million tonnes, which would be the second highest on record.

As a result of the adjustments to Cotlook’s numbers in October, an addition of 995,000 tonnes to world stocks was envisaged at the end of this season, compared with 452,000 a month earlier. 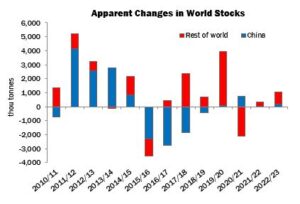