International cotton prices rose to new heights during April, under the lead of a strong and volatile New York futures market. By the end of the month, the Cotlook A Index had risen to 166.05 cents per lb, an increase of 950 cent points.  A number of factors contributed to the upward trajectory of New York. At a macro-economic level, inflationary pressures, exacerbated by the continuing war in Ukraine, sustained buying interest in most commodities. Elements specific to cotton included the persistence of drought conditions in the important US growing region of West Texas and the substantial volume of spinners’ on-call purchases yet to be fixed. Sell-side liquidity was lacking as hedging against physical cotton was limited and funds remained committed to the long side of the market. 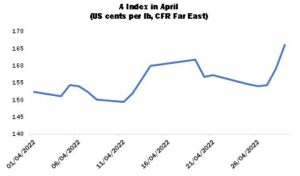 The bullish dynamics at work in the futures market provided a marked contrast to the waning confidence discernible amongst most cotton spinners. Yarn selling rates signally failed to keep pace with the rise in raw cotton replacement costs during April, and mill buyers became ever more wary of committing themselves to new purchases at prices that were far above the level at which yarn could be spun profitably.

Downstream demand for yarn was much less robust than was the case in 2021, and reports of accumulating stocks became more frequent. The same inflationary expectations that encouraged institutional investors to buy commodity futures casting doubt on the outlook for consumer spending on discretionary items such as textiles. Commentary from numerous analysts, as well as the behaviour of stock markets, imply that economic recession is a strong probability this year or next.

As a result of the foregoing, demand for raw cotton in the physical market presented a cautious appearance, though mills with pressing requirements to cover were obliged to enter the market as lots became available. Short-term demand was stimulated whenever prices retreated in response to a bout of profit-taking in New York. Some spinners continued to test forward prices, usually ‘on-call’ futures, but most merchants adopted a cautious approach to such sales opportunities, given the multiple sources of uncertainty and risk that surround the forward trading outlook.

Chinese spinners were encountering adverse market conditions long before the malaise described above took hold amongst their counterparts elsewhere in the world. During April, their situation deteriorated further. Business confidence received a further blow from the resurgence of Covid in many manufacturing and commercial cities including Shanghai and Beijing. In late March, the continued rally in New York had raised import offering rates above local spot values, and that disparity widened further during the course of April.  Spinners’ incentive to enter the international market was thus greatly reduced and import quotas rendered virtually redundant for the time being. In March, Beijing had announced a discretionary 400,000-tonne Sliding-Scale quota (to supplement the 894,000 tonnes of Tariff-Rated quota available each year), a move that would normally be construed in a bullish light by the international market. 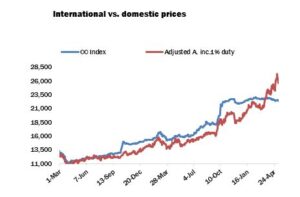 On April 13, India’s Ministry of Finance issued a notice that raw cotton was to be removed from the list of goods attracting customs duty and other associated levies with effect from April 14 until September 30 (the eve of the new domestic cotton season). The decision came in the context of escalating local raw cotton and yarn prices, a reaction both to global market conditions and to the significant decrease of estimates of domestic output from the 2021/22 crop. The measure initially raised expectations of a surge in import buying to make good the shortfall, and a flurry of enquiry for a range of foreign growths duly emerged. However, thoughts that buying interest from India might offset the lack of demand from China soon faded, as it became apparent that the scale of import business would probably be relatively modest. Many Indian spinners baulked at the level of import offers that were inflated by the heavy freight premiums quoted by shipping lines for sailings to the subcontinent. For their part, international merchants struggled to identify supplies that could be offered with confidence that arrival would take place before the end of September.

Cotton Outlook’s April supply and demand forecasts indicated a rise in world stocks during the 2022/23 season of just over 500,000 tonnes. That surplus could increase if the pace of raw cotton consumption slows further over the coming months. However, production forecasts may also be subject to significant changes, most notably in the United States, where the prospects for rain in West Texas will remain under close scrutiny. 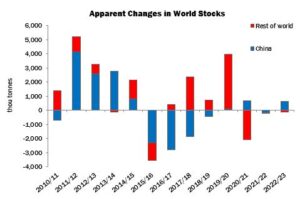