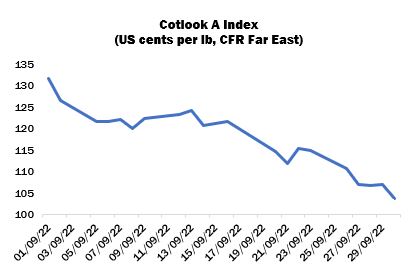 International cotton prices reversed direction in dramatic fashion during September, influenced by macro-economic headwinds and a weak demand situation that saw nearby ICE futures fall back below the dollar mark mid-month, and continue their decline for the rest of the period. The December contract recorded its lowest value since mid-July on September 29, while The Cotlook A Index has declined by over 21 percent from late August, and by 40 percent since its recent high point in early May. It should be noted, however, that shippers’ offering rates are still high from an historical perspective: the A Index long term average (30 years) is only slightly above 76.00 US cents per lb.

The movement of prices continued to be informed primarily by broader trends in agricultural and other commodities, as well as the uncertain outlook for demand at the consumer level that impacted cotton yarn purchases in the downstream market.  On the face of it, the state of supply in the coming months presents a fairly bullish picture, as can be seen from Cotlook’s latest estimates for 2022/23, which illustrate the extent to which output in some of the major exporting countries has been curbed by an unhelpful growing season (more of which below). However, cotton prices appeared to give a much greater significance during September to the demand destruction emerging across the globe as a result of macro-economic factors.  At certain origins, pressure from the Northern Hemisphere harvests is beginning to be felt.

The precipitous fall of raw cotton values was considered problematical for a number of reasons, not least of which was the execution of high-priced contracts, arranged earlier in the year, being made much more difficult. The threat of defaults loomed as spinners were expected to take delivery of substantial volumes of cotton purchased at levels much higher than those in force today, and when the outlook for demand seemed far more promising. Many of the shipments in question have been subject to substantial delays. Furthermore, mills’ profits were eroded by weak cotton yarn asking rates during the month, as sales in the downstream sector were slow, impacted by a significant reduction of orders from brands and retailers.

The major exception to the dull business scenario was Pakistan, where spinners were prompted to cover their more pressing needs from a broad range of origins – both to compensate for flood-related crop losses and to achieve a lower average buying price. A fairly active demand was evident for most of the period, only tailing off in the last week or so of the month, by which time most mills had secured their urgent requirements. Of particular interest late in the period was Turkish lint, on grounds of price and nearby availability. Unsold stocks of raw cotton and yarn are mounting in that country, and financial pressures on mills are growing. Many mills are running at well below normal capacity and some have paused their operations altogether.

Elsewhere, mill purchasing was at a low ebb, as illustrated by the pedestrian pace of US export sales registrations released in September. By the week ended September 22, sales commitments of all cotton were nonetheless equivalent to nearly two thirds of Washington’s projection for the season (12.6 million bales of 480 lbs), although that figure was swelled by the sizeable volume of unshipped sales carried over from the previous marketing year.

The US balance sheet therefore appears very tight, despite the United States Department of Agriculture’s recent increase to its estimate of domestic output – a move which we at Cotlook have followed. The upward adjustment was informed by a significantly higher assessment of planted area. However, in the final days of the month, a further threat to the US crop emerged, as Hurricane Ian approached open cotton in the Southeast. A full assessment of the damage caused had not yet been possible by the time of writing, but a further downturn in the US crop forecast cannot be ruled out.

The increase to our assessment of the US crop was more than offset by reductions for the subcontinent, most notably Pakistan, where torrential rains flooded fields and damaged seed cotton during the growing season. The second consecutive downward adjustment for that producer brought Cotlook’s expectation for the crop to 950,000 tonnes, its lowest in recent times.

A smaller fall was recorded for output in India, owing to a shortfall of planted area compared with our initial estimate. The Southwest Monsoon began its withdrawal on September 20, just a few days later than normal, and so it seems likely that the crop will avoid the damaging rainfall that was received during the harvest period last year.

On the global consumption front, the deepening pessimism with regard to the outlook for mill demand in the season ahead has informed a further cut, to almost 24,440,000 tonnes, some 2.3 million tonnes lower than our initial number, published in February of this year, and representing a modest decline from the 2021/22 season. Following a period of very good profitability, mills in many countries are now faced with an extremely challenging trading environment that has prompted partial or total mill closures.

As a result of the above adjustments, a surplus of production over consumption is posited in the current season, of 452,000 tonnes, up from a negligible 12,000 tonnes at the end of August. 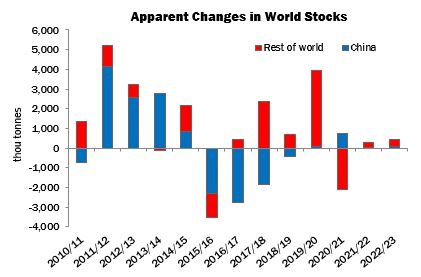