International cotton prices moved in a wide range during November, influenced by sharp fluctuations in New York. The Cotlook A Index began the period at its low point of 89.20 US cents per lb, and climbed to a high of 105.75 cents mid-month, before edging lower to end slightly below the dollar mark. 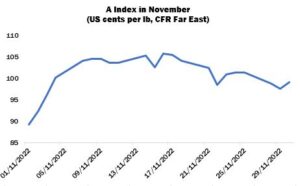 Downstream textile demand remained slow during the month, impacted by the persistently gloomy outlook with regard to consumer demand for discretionary items, and hence buying interest for both raw cotton and cotton yarn was subdued in most markets. Unsold yarn stocks accumulated, and spinners were not keen to add to their lint inventories in the face of both a weak demand environment and the volatile behaviour of raw cotton replacements costs. In addition, the strength of the US dollar meant that currency reserves ran low in many of the main consuming countries and banks were generally less willing to open Letters of Credit and extend finance to mills.

A tentative improvement in import demand was noted in a few Far Eastern markets, mainly for fourth-quarter shipment. Mills in Vietnam were keen to maintain their operations, even at a reduced capacity, in order to retain workers in anticipation of a revival of the downstream sector in the first quarter of 2023. However, the little demand in evidence was largely directed to ex-warehouse supplies or cotton available for nearby delivery, with no signs of a greater upturn in terms of forward purchases.

Spinners in Pakistan, previously the most active import market, tended to retreat to the sidelines. The consensus among trade observers is that spinners will have to re-enter the market at some point, owing to the short local crop (which is estimated to be some 40 percent lower than last season), but buyers were in no rush to make purchasing decisions during much of November. Meanwhile in Bangladesh, following a protracted period of very slow sales, a slightly brighter picture began to emerge in the apparel sector. Export customers were enquiring for goods for the spring season. However, price ideas were depressed, and the pace of orders remained well below its usual level.

Market participants were encouraged by news late in the month of an easing of China’s Covid restrictions in some major cities. Flights and railway transportation were partially restored in Xinjiang, and some provinces resumed normal production. However, a notable reversal of China’s cautious approach to import purchases is yet to emerge.

Indeed, US export reports released during the month reflected the poor state of import demand, even on the fringes of the US Sourcing Summit, which took place mid-month, and usually provides an opportunity for considerable volumes of business in US lint to be concluded. The additions indicated were very modest, while a considerable net reduction recorded in the week ended November 17 partially offset those gains resulting in an increase over the four-week period under review of just 71,000 running bales of upland cotton. The greater part of the mid-month reduction was attributed to Chinese buyers, who slashed their commitment by 109,500 bales, although decreases were also noted for Pakistan and some smaller markets.

However, on the face of things the US balance sheet maintained its bullish appearance. Total commitments by the end of November were equal to roughly 73 percent of USDA’s export forecast for the season (12.5 million statistical bales of 480 lbs). That figure of course includes a substantial volume of unshipped commitments carried over from last season. Stocks by the end of 2022/23 are estimated by USDA at an historically low three million bales at the time of writing, with the potential to fall further, if Washington, as some observers anticipate, reduces its crop number in the December assessment of domestic production and consumption.

Cotlook’s November assessment of global supply and demand included relatively modest changes, compared to the earlier months of this season. World production was raised by 48,000 tonnes, to 24,852,000 tonnes, representing a fall of 190,000 from 2021/22. Increases were noted for Turkey (where firm prices during the planting season contributed to a greater sown area, and good weather facilitated crop development), and the US (informed by a higher estimate of output from USDA). Our figure for Australia underwent a reduction, as the very heavy rains and flooding over much of the growing belt delayed sowing of the cotton crop beyond the optimum window. 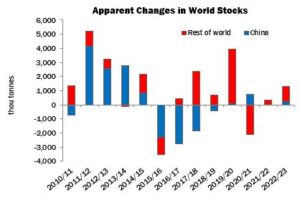 Our estimate of global consumption was reduced by a further 170,000 tonnes, to be placed at 23,639,000, more than three million tonnes below our initial estimate released in February of this year. The change was attributable entirely to India, which was the latest country where the well documented difficulties on the demand side of the market came into clearer focus.

As a result of the above adjustments, Cotlook’s November numbers indicated an increase of global stock levels of over 1.2 million tonnes by the end of the current season, compared with a rise of 995,000 tonnes a month earlier.