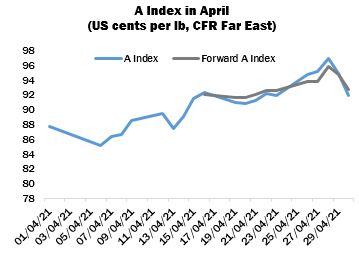 Having lost substantial ground the previous month, international cotton prices resumed the upward trajectory that has been in evidence since the beginning of 2021 to move higher during April. The Cotlook A Index reached a high point of 96.90 US cents per lb late in the month, before relinquishing some ground to end the period 425 points above its opening value.
April 16 saw the introduction of the Forward (2021/22) Cotlook A Index, reflecting cotton for shipment no earlier than October/November. The initial value, at 92.1 US cents per lb, represented a slight discount in relation to the Current Index but by the end of the month had moved to a small premium.

The major influence on prices during April appeared to be weather conditions in West Texas, which are decisive to the size of the US crop. According to the US Drought Monitor, by April 27 soil moisture levels across growing areas of the state ranged from ‘abnormally dry’ to ‘exceptional drought’. Following a rainy month of March, rainfall recorded in Lubbock amounted to just 0.24 of an inch, well below average.

The Prospective Plantings report, released by the Department of Agriculture at the end of March, placed cotton plantings in 2021/22 at around 12 million acres, close to the area sown to the 2020/21 crop. However, that forecast may already have been overtaken by events to a certain degree: quite apart from climactic obstacles, prices for competing crops have been very strong and could lead to a shift of land away from cotton. 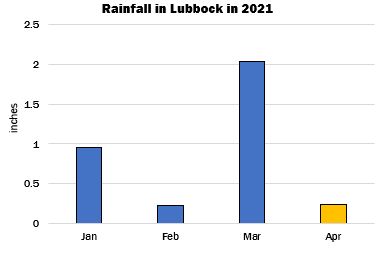 The market’s sensitivity to the US production outlook should be seen in the context of a tightening balance sheet. The Department’s export projection for the current season, meanwhile, was raised modestly to 15.75 million 480lb bales, a feat that would seem easily achievable given that combined sales commitments of upland and Pima were already in excess of that figure by the week ended April 22. Sales to China accounted for almost 32 percent of the running total. The season’s ending stock was reduced to 3.9 million bales, versus a beginning stock of 7.25 million. 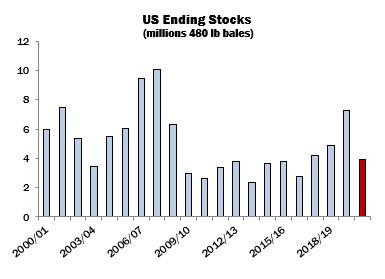 In China, strong rumours circulated during the month to the effect that issuance of a substantial Sliding-Scale import quota was imminent. Late in the month, the National Development and Reform Commission announced the quota would amount to a rather more moderate volume of 700,000 tonnes. Of that total 400,000 tonnes are ‘processing trade’ quota (under which finished textile goods must be exported), from which duty is exempt. International reaction to the news was somewhat muted as a considerable volume of cotton, mainly Brazilian and US, remains consigned at Chinese ports and it appears likely that at least part of the quota will be utilised to move off some of those stocks, rather than to make fresh import purchases of shipment cotton.

In general, mill buying was subdued in the face of rising prices and the resurgence of Covid infections in some of the major consuming markets, which impacted spinning and manufacturing sectors. Underlying demand was present in Bangladesh, where garment orders are relatively robust, but the volatile nature of prices delayed some purchasing decisions. However, some spinners were in more urgent need of cover, particularly as shipping difficulties have continued to delay shipments in particular from the African Franc Zone, where much of that demand is directed.

The major changes to Cotlook’s forecasts of supply and demand during April concerned Southern Hemisphere producing countries, most notably Australia. The abundant rainfall reported in March appears not to have caused much damage to the 2020/21 crop, harvesting of which is picking up, while reservoirs and river systems were replenished, resulting in a considerable increase to our figure for 2021/22, of 150,000 tonnes. That would represent the largest crop since 2017/18. Early forecasts suggest that planted area may double from this year.

In Brazil, safrinha (second crop) cotton appears to be progressing well in Mato Grosso, although a significant area was planted outside of the ideal timeframe. Hence, Cotlook’s production number for 2020/21 was raised by 100,000 tonnes, to 2.5 million.

On the global consumption front, the optimism that was evident early in the year has since diminished somewhat, but our numbers continue to envisage a strong revival of mill use this season from the significant decline witnessed in 2019/20. World consumption in 2021/22 is placed at just shy of 25.7 million tonnes, implying a lowering of world stocks by the end of that season of nearly 300,000 tonnes.