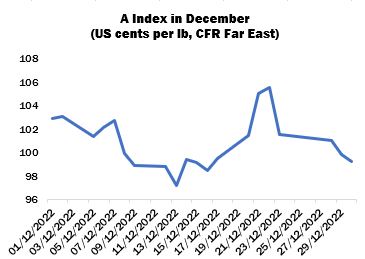 International cotton prices fluctuated in a wide range during December, owing to sharply higher and lower settlements in New York, to end overall with a decline on the period. The A Index fell to a low of 97.25 US cents per lb mid-month, before reversing direction to reach its high point (105.55) on December 22. However, prices moved lower in the following four consecutive sessions, to settle just below the dollar mark. 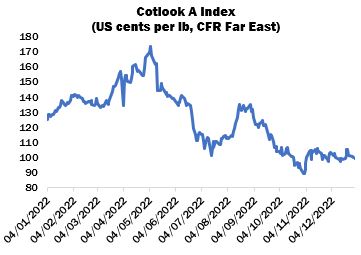 That volatility was reflective of the behaviour of prices throughout much of the last calendar year. In 2022, the A Index began at 125.05 and climbed to 173.45 by early May. That peak was below the all-time high of 243.65 attained in March 2011 but was still quite exceptional from a historical perspective. Notwithstanding a few upward reversals, the Index fell sharply for much of the rest of the period before settling into a trading range in early November.  The Index’s nadir, of 89.2 cents, was recorded at the beginning of November, and the price closed the year at 99.25 cents per lb, more than 74 cents below highest point of the year. The average for the 12-month period was slightly more than 130 cents per lb, compared with 101.39 in 2020, which itself was historically high.

On the business front, while downstream textile demand remained below the level that would normally be expected for the month of December, the slightly more positive mood that was sparked by China’s relaxation of Covid restrictions in late November was maintained and a further tentative improvement in raw cotton demand was witnessed in several countries. Vietnam was mentioned as one of the more active import markets, as mills experienced a modest uptick in demand for cotton yarn ahead of the approaching Tết new year celebration (which will coincide with China’s Lunar New Year holiday, beginning January 22). A slight upturn in mill enquiry was also noted in Turkey and Pakistan – both countries that had previously been experiencing remarkably weak trading conditions owing to the persistently gloomy outlook for consumer demand for textiles. Generally, a cautious optimism began to emerge during December, though that optimism was tempered somewhat by rising Covid cases in China, and a transformation of market sentiment still appeared some way off.

For their part, buyers in China displayed some price-testing enquiry and shippers remarked that confirmed sales were anticipated ahead of the deadline for tariff-rated import quota at the end of February. However, actual business reported was very scarce. The dearth of Chinese import demand in the season so far is illustrated by the paltry increase to that country’s commitment for imports of upland cotton from the United States. Whereas China would usually be one of the principal export markets for US cotton, since the beginning of 2022/23, less than 30,000 running bales (of 500 lbs) have been added for China, compared to over 585,000 for Pakistan, which occupied first place by late December. 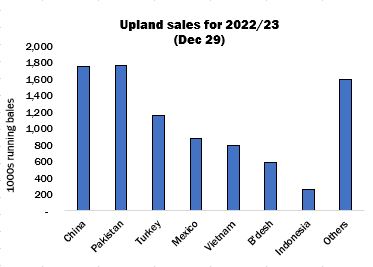 At more than 8.9 million running bales, the cumulative total commitment (all cotton) by December 29 was equivalent to roughly 75 percent of USDA’s forecast for the season (reduced to 12,250,000 statistical bales of 480 lbs in the December WASDE report).

Some notable changes were made to Cotlook’s assessment of global production in our December estimate of supply and demand, most notably for China and India. In the former country, reports of better yields in the major growing region of Xinjiang prompted an upward revision to our figure, which stood at the end of the year at more than 6.1 million tonnes.

This season’s prospective supply in India remains a source of conjecture: seed cotton arrivals remained well behind the pace of last season by late December, having failed to gain momentum following return from the Diwali holiday. Local observers remained firm in their view that the discrepancy could be explained by growers holding back stocks in anticipation of higher prices later in the season. However, among international observers, doubt emerged with regard to the eventual size of the crop. Cotlook’s assessment was reduced to 34.25 million bales, and will remain under review in the coming months.

Some more modest adjustments were also made to the figures for other producing countries. In the United States, a greater than anticipated number was put forward in USDA’s December estimate of domestic output, which prompted our increase, of 46,000 tonnes. The very wet weather experienced in Australia during recent months, which delayed field work and hindered sowing operations and affected plant development in some major growing regions, prompted a reduction to our figure, to below 1.1 million tonnes – still high from a historical perspective.

At 24,897,000 tonnes, global output in 2022/23 is placed only modestly below the estimate for the previous season. Meanwhile no changes were made to Cotlook’s assessment of global consumption in December, which remained at 23,639,000 tonnes (implying a decline of 4.4 percent from 2021/22). Hence, Cotlook’s December numbers indicated an increase of global stock levels of 1,258,000 tonnes by the end of the current season, up from an increase of 1,213,000 a month earlier. 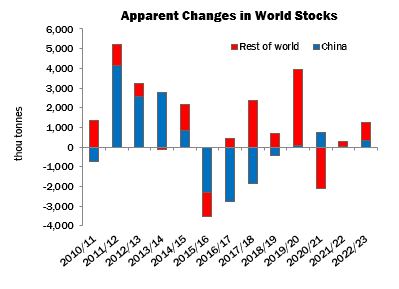