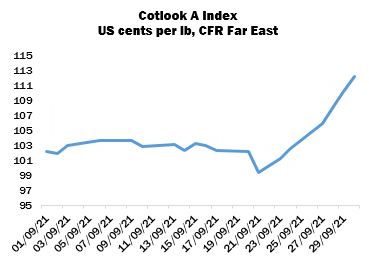 International cotton prices stayed within a narrow range for most of September, before staging a dramatic rally late in the month, influenced by a sharp rise in New York. The ICE December contract first fell to its lowest level since late July, as part of a general sell-off in commodity and share markets that was associated with the financial difficulties of a major Chinese property group, before reversing direction to surpass the dollar mark for the first time in over ten years. The increase in cotton futures was prompted by a range of factors including strong speculative buying and evidence of active import purchasing from China (more of which below). The Cotlook A Index, meanwhile, started the period at 102.15 US cents per lb, and ended ten cents higher than that level, at 112.15 cents per lb.

Mill buying continued to be constrained by the shipping and freight issues that have blighted international trade for some months now, and the very well sold position of those growths from origin that would usually be employed to bridge the gap between the last of the old season stocks and the arrival of new crop lint in the Northern Hemisphere. Many shippers have suspended their offers for delivery up to the end of 2021. Spinners in need of cover have turned to virtually any cotton available nearby, but even those supplies became depleted during the month. Some mills in Bangladesh and Far Eastern markets such as Indonesia were at risk of running out of cotton, a situation that would be inimical to the fulfilment of downstream orders, which generally remained robust.

The major exception to the limited mill purchasing in evidence during September was in China. Market participants reported strong demand from that quarter, mainly from state-owned enterprises but also from some private mills. Those reports were confirmed in US export sales reports, which featured China as the major buyer in four consecutive weeks, and showed a net addition during the month of almost 1.4 million statistical bales (480lbs). In the wake of the strong buying, Beijing made an announcement late in the month to the effect that additional Sliding-Scale import quota will be allocated in due course, to add supply to the domestic market in an attempt to rein in the recent rises in physical and futures prices. Further details regarding quantity and eligibility are awaited. However, conjecture was rife in market circles that the quota may be utilised to fulfil the ‘rotation’ policy that has for some years been adopted by China’s State Reserve.
The State Reserve auction series was due to conclude on September 30, but was instead suspended on that day and rumours began to circulate that the sales programme would be extended. When China returned from a week-long national holiday on October 8, auctions recommenced and will continue until the end of November. Given the fact that the auction series to September 29 had disposed of around 630,000 tonnes of lint, Cotlook estimates the volume remaining in State Reserve warehouses at slightly more than two million tonnes, or around three months’ worth of local consumption. With this in mind, the smoothest method for China to replenish reserve warehouses with imported cotton, without exacerbating the current high world prices and tight nearby supply, would seem to involve stocks already on consignment at Chinese ports, and in the wake of the announcement reports were forthcoming that some SOEs had already begun the process of moving those stocks through customs and into their hands.

Overall, the United States’ export commitment (of upland and Pima) was placed by late September at 7.63 million statistical bales, compared with around 8.5 million at the same point last season. Cotlook’s forecast of US production in 2021/22 was raised by 108,000 tonnes in September, to bring our figure in line with the United States Department of Agriculture’s latest assessment (18.51 million 480-lb bales). That number was informed by a more optimistic outlook for yields, which are now placed at the second highest level on record. Beltwide, picking was slightly ahead of schedule by late September and crop condition reports were generally favourable; however, the eventual outturn will be dependent on weather conditions during the rest of the growing season.
Increases were also made to the production numbers for Turkey, where good weather has facilitated crop development, and China, where local reports have suggested that plants have staged a recovery from the weather-related difficulties witnessed earlier in the growing season.

As a result of the above adjustments, Cotlook’s estimate of world cotton production during the 2021/22 season was increased by 219,000 tonnes to 25,981,000, marking an increase of 7.8 percent on the previous season. 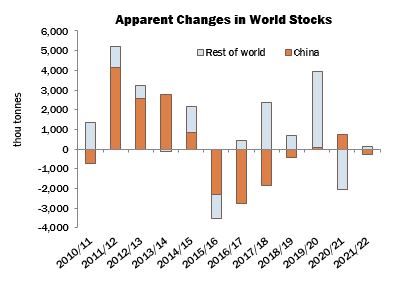 On the consumption front, our figure for the current season has been raised by a modest 55,000 tonnes to 26,103,000 tonnes, a level last attained before the shocks to demand dealt first by the Sino-US trade conflict and then by the Covid pandemic. The change is predominantly the result of an increase for Turkey, where the excellent margins obtained by spinners in recent months have resulted in increased investment in new spinning capacity. It should be noted, however, that the increase in world consumption from last season of just 2.7 percent signals a considerable slowdown in the rate of growth from the previous year. The historically high level to which raw replacement costs have risen, coupled with an expectation of slower growth in the global economy, contribute to our somewhat cautious assessment.