International cotton prices were again subject to wide and unpredictable movements during July, as New York futures continued to move in volatile fashion. 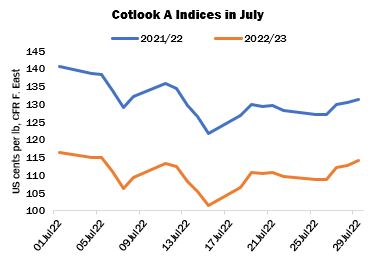 The Cotlook 2021/22 A Index recorded a final (nominal) value of 131.40 cents per lb, compared to a high of 173.45 attained on May 5 and an average for the 12-month period just below 132.00 cents per lb. Since nearby offers are sparse in the extreme, the Index was designated as ‘nominal’ during the final stages of this marketing year. 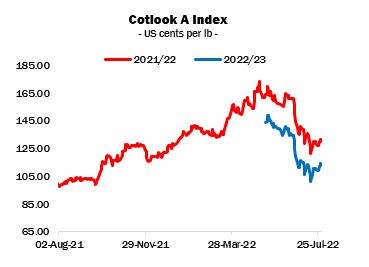 The Forward (2022/23) A Index, reflecting offers no earlier than October, has for some time been the more relevant value. It ended the period at 114.10 cents per lb, a net decline of 85 cent points, despite a strong rally during the second half of the month.

From August, the 2022/23 A Index (henceforth the Current Index) will stand alone until after the year-end, when a new Forward (2023/24) A Index will be introduced as soon as sufficient market evidence is available.

At various times, ICE cotton futures were influenced by broader trends in agricultural and other commodities, macro-economic developments and, in particular towards the end of the period, US cotton supply and demand fundamentals.

In this last regard, the month saw a further deterioration of the situation in West Texas. The largest growing region in the US gained little respite from chronic drought, exceptionally high temperatures and high winds. Early in the month, the Department of Agriculture reduced its forecast of the 2022/23 crop by one million statistical bales (480 lbs) to 15.5 million. By its end, as estimates of abandonment in the region mounted, most private estimates were well below that figure. Cotton Outlook’s revised estimate was equivalent to less than 14.4 million bales, which would be the smallest crop since the 2015/16 season.

Despite the unfolding crop disaster on the Texas Plains and its implications for next season’s US balance sheet, for much of July New York was subject to downward pressure, as speculators adopted a ‘risk-off’ stance in the face of rising inflation, upward pressure on interest rates and growing fears of economic recession. By July 19, speculators’ net long position had fallen to just over 21 percent of the open interest in New York, down from over 40 percent in early May. Not until later in the month were fears of demand destruction in the textile supply chain eclipsed, at least partially, by bullish developments on the supply side. 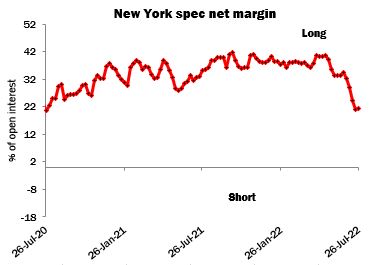 The latter were felt most acutely in the US but were not confined to that country. As the Brazilian harvest progressed, misgivings with regard to this season’s yields mounted and most observers substantially reduced their expectations of a crop that is already well committed from first hands. In India, sowing made good progress, stimulated as anticipated by the previous season’s record prices and assisted by an abundant Monsoon. However, by the end of the month the torrential rains were perceived as a threat to the emerging crop in some major producing states. Copious rainfall was perhaps even more unwelcome in Pakistan, where the crop was further advanced and the harvest already under way in some early-sown districts.

As for China, little bullish impetus was forthcoming from that market, often the key to the behaviour of world cotton prices. Early in the period, the China Cotton Association released its estimate of ‘commercial’ or free market stocks at the end of June. At more than 3.7 million tonnes, the figure was the highest on record for that point of the season. 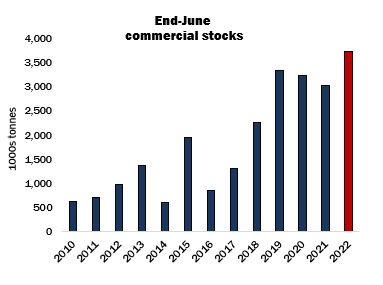 On July 13, there began a programme of State Reserve purchasing from ginners in Xinjiang, who are burdened by large stocks for which the break-even sales price is several thousand yuan above the current market. Since the auction process incorporates a maximum purchase price close to local spot market levels, ginners have shown limited enthusiasm and the quantities absorbed were modest by the end of the period.

Mill demand in China showed some improvement during the course of the month, as Covid restrictions were relaxed. However, sentiment in the local market is also affected by the likely implications for textile and clothing exports of the Uyghur Forced Labor Prevention Act, passed by the United States in December and in force since late June.

Local prices followed a fairly resolute downward trajectory, the lead contract on Zhengzhou cotton futures shedding 1,850 yuan per tonne (some 19 US cents per lb) during July. In the face of plentiful local stocks and falling prices, import demand remained subdued, though some traders continued to report price monitoring on the part of state-owned trading entities.

Cotton Outlook’s global supply and demand estimates showed some significant changes during July. For the current season, downward adjustments to the consumption numbers for Vietnam and, in particular, China, resulted in a reduction of 650,000 tonnes to the world estimate. As a result, the figures indicate a surplus of production over consumption of 343,000 tonnes, whereas a fall in world stocks of 285,000 had been suggested a month earlier. Meanwhile, the production forecast for 2022/23 has been decreased owing to cuts to the United States, reflecting the adverse conditions in Texas described above, and Brazil, where the market’s recent collapse, coupled with rising production costs, may result in a lower area devoted to the next crop (sown either side of the year-end). The anticipated excess of output over consumption in 2022/23 has been reduced from 1,114,000 tonnes at the end of June to 640,000.