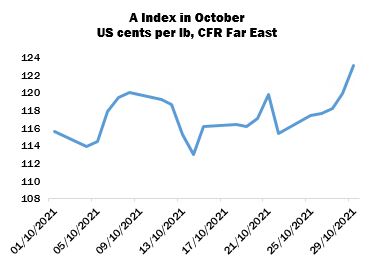 International cotton prices moved in very volatile fashion during October, under the lead of sharp fluctuations in New York futures, but overall continued the upward trajectory that has been in evidence since the middle of this year. The Cotlook A Index moved within a range of roughly ten US cents per lb, hitting a low of 113.05 mid-month, and ending the period at a high point of 123.10 cents, almost 750 points above its opening level.

The well documented shipping difficulties and freight premiums showed few signs of easing during October, but demand persisted from a broad range of markets, mainly for cotton available for shipment either side of the year end. Turkey was one of the more active buyers, owing to an increase in downstream orders, particularly from European customers, due in large part to the much shorter lead times associated with deliveries from that country than from manufacturers based further afield. Mills in Bangladesh continued to encounter severe difficulty in securing deliveries of raw cotton, to the extent that the continuity of some spinners’ operations appeared under question. Forward mill purchasing meanwhile continued ‘on-call’ New York, at basis levels that reflected the above mentioned freight uncertainties, as well as the strength of cotton prices at origin.

Chinese buyers remained very active during October, predominantly for US lint but also for some other growths including Brazilian and Indian styles. The discrepancy between domestic and international asking rates, which stood at the equivalent of more than 22 US cents per lb for much of the period, proved too attractive a price advantage for mills with unused 2021 import quota to forego. Various state-owned trading entities were also intermittent buyers during the period.

On the domestic Chinese market, daily turnover at the extended State Reserve auctions declined in proportional terms but (owing to larger daily catalogues) the actual volumes sold remained fairly robust: in the month of October, almost 250,000 tonnes were disposed of, all of which was cotton acquired in the period between 2011 and 2014. Hence, the volume of those older stocks residing in Reserve warehouses has been significantly depleted, to perhaps half a million tonnes or less, by Cotlook’s estimation. The impression is that the average quality of the ageing cotton left in the reserve is poor. Our calculations indicate that the volume held by the State Reserve by the end of October was roughly 1.75 million tonnes, most of which is US and Brazilian lint acquired since 2018, as well as some 2019/20 crop Xinjiang cotton.

Beijing’s intentions as regards the timing and volume of purchases to replenish the reserve remain a major point of conjecture in market circles. China appeared as the lead destination in three of the four weekly reports (falling from that position only during a holiday period, which limited business activity), and accounted for around 56 percent of the total net upland addition during the period.

Overall, US upland export commitments in the season to October 21 were within five percent of the volume committed by the same date in 2020/21. Cumulative upland shipments by October 21 were just 65 percent of the amount shipped by the same point a year earlier, but it should be noted that early season deliveries last year were bolstered by the movement of cotton sales to China that were carried over from the previous marketing year. 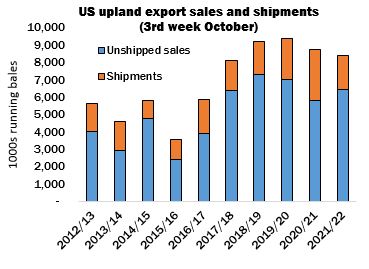 Cotlook’s estimate of the outlook for global production was little altered in October, as the major Northern Hemisphere harvests proceeded under generally benign weather conditions. World output was placed at 25,946,000 tonnes, which would represent an increase of 7.6 percent from the estimate for the previous season and a reduction of just 35,000 tonnes from that advanced in September.

The figure for the United States was reduced by 110,000 tonnes, to slightly more than 3.9 million, to bring our number in line with that advanced in the Department of Agriculture’s October supply and demand report. The decrease was attributable mainly to the lowering of yield expectations in the major producing state of Texas, which were earlier placed at a near record high.

Partially offsetting that reduction was an increase of 75,000 tonnes in Pakistan, where very strong seed cotton arrivals continued; by mid-month, the volume delivered to gin yards was approaching double that recorded by the same moment in 2020. 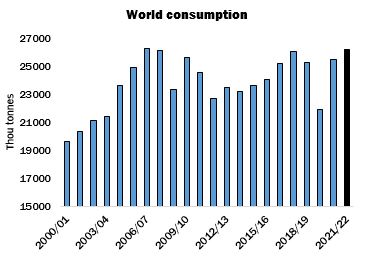 Our forecast of consumption in the current season underwent only one alteration in October, which was an increase for Bangladesh of 50,000 tonnes. Retail sales data in the major cotton consuming countries continued to support the idea that downstream demand remains fairly robust and mill use should be maintained for the time being. Cotlook’s figure for global consumption in 2021/22 therefore stands at 26,153,000 tonnes, representing a modest advance from the previous season, and the highest since the previous peak in 2006/07.

As a result of the above adjustments, world stocks by the end of the current season are forecast to have declined by 207,000 tonnes, compared with 122,000 in our September assessment.