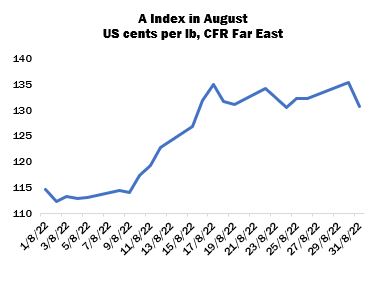 International cotton prices advanced strongly in the first month of the 2022/23 season, as ICE futures were supported by increasingly tight availability of cotton for nearby shipment and the lowering of production estimates, most notably in the United States. The Cotlook A Index registered its weakest price of 112.30 US cents per lb early in the period, and rose to a high point of 135.25 on the penultimate day of the month, before a sharp inter-day decline saw the Index end almost five cents below that level.

The fall of prices late in August was attributed mainly to a gloomy macroeconomic outlook, rather than cotton fundamentals, and was replicated in other commodity markets. Mill purchasing meanwhile remained fairly subdued as the market was still in its traditionally slow summer period, while yarn purchasing was limited as downstream manufacturers assessed the uncertain outlook for consumer demand for textiles – a discretionary item – in the face of rising inflation.

The major exception to the slow pattern of mill buying was Pakistan, where flooding threatened a severe reduction in the size of the domestic cotton crop and prompted spinners to secure a portion of their requirements for the months ahead. A broad range of growths found buyers, including US, West African and Brazilian, for both nearby and forward shipment. Business was also arranged in Bangladesh, mainly for fourth quarter shipment, although the volume of those purchases was limited by the relationship between raw cotton replacement costs and yarn selling rates, the disparity between which remained substantial. Spinners in Far Eastern countries remained broadly on the sidelines, as mills awaited a greater clarity with regard to the outlook for yarn and textile sales in the remainder of the year.

Customs data in China revealed that the aggregate volume of raw cotton imported in 2021/22 was slightly more than 1.7 million tonnes, compared with over 2.8 million in the previous season and almost 1.6 million in 2019/20, when Covid related restrictions were at their height. The relationship between local Chinese prices and international parities in recent months failed to tempt buyers to turn to imports on any great scale. The large volume of unsold cotton in that country (‘commercial’ stocks stood at the end of July at their highest ever point for that moment in the season) and the damaging impact of lockdown measures in some major cities contributed to Chinese prices that are among the lowest in the world. The State Reserve purchasing programme that began in July, meanwhile, had lost momentum by the end of August, with just a quarter of the possible maximum volume having changed hands. As ever, the outlook for import purchases from China will be watched with interest but on current indications a strong recovery of demand from that quarter seems unlikely. 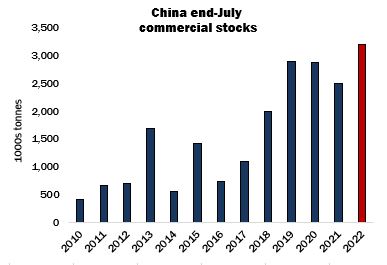 The United States was the major supplier to China last season, accounting for over half of total imports. Unfortunately, in the second half of the month under review, technical difficulties precluded publication of the weekly United States export data that usually provide an insight into the state of global mill demand. Regular reporting is not expected to resume until mid-September. However, that the much-reduced US crop is already heavily committed was clear even as the current season began.

Outside the United States, too, the supply situation paints a somewhat bullish picture for cotton. Machine-picked supply looks set to be limited in the medium term. Brazil’s 2022 crop is well sold from origin and was the subject of some conjecture as regards quality during August. The remaining Australian lint is dwindling and likewise comprises grades below Middling, for the most part, while the bulk of the Greek crop, available from around October onwards, will no doubt be shipped to spinners in Turkey and Egypt, as is the norm.  The next major sources of supply, from the Southern Hemisphere 2022/23 crops, will not be available to the market for several months.

Elsewhere, the African Franc Zone and India should provide some cotton for export during the first quarter of 2023, but the outlook for production in the latter country is the object of some uncertainty as precipitation continues over cotton fields and planting seems likely to fall short of the record-breaking 13 million hectares that were earlier in prospect. 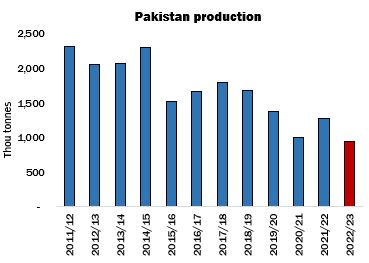 Some major changes were therefore made to Cotlook’s August estimate of global production in 2022/23, the most dramatic of which concerned the United States, where the decimation of the dryland crop in West Texas has seen our output number, following the lead of USDA’s August forecast, lowered by almost 400,000 tonnes, to its smallest since the 2009/10 season. The reduction to our number for Pakistan, where the well-reported torrential rains have flooded fields and caused substantial damage to infrastructure, was almost as swingeing, and brought our estimate of output from that country to less than one million tonnes, representing a 25 percent decline from the season just ended.

Cotlook’s forecast of consumption was also reduced, in the US and smaller countries, in view of the impact of economic headwinds across the globe and the prospect of further difficulties yet to come. Our latest estimate indicates an increase from the previous season that is so small as to be insignificant.

As a result of the above adjustments, world stocks by the end of 2022/23 are forecast to fall by 323,000 tonnes, as a very modest increase in China is more than offset by a reduction in the rest of the world. 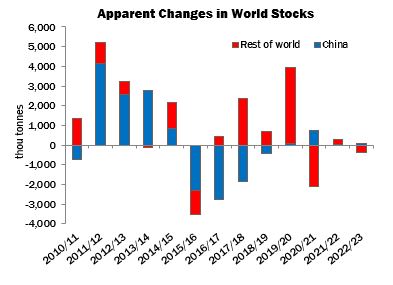