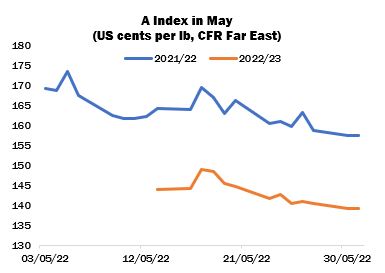 International cotton prices registered new recent highs in early May, before falling back to end the period lower, in tandem with a falling (though persistently volatile) New York futures market. Early in the month, the Cotlook A Index rose to 173.45 cents per lb, but ended the period at its low point of 157.45 cents/lb.

May 13 saw the introduction of the Forward (2022/23) Cotlook A Index, around a month later than last year. That price reflects cotton for shipment no earlier than October/November. The initial value, at 144 US cents per lb, represented a discount of over 20 cents in relation to the Current Index on the same date. The differential had narrowed only slightly by the end of the period, to 1,820 cent points.  The inverted July/December spread in New York fluctuated erratically during May, ranging from 1,529 to 2,498 cent points (based on closing values). 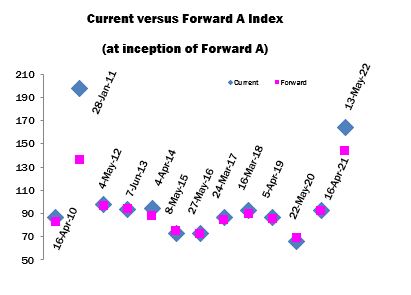 A catalyst for the decline of the December contract late in the month was the receipt of rainfall over the United States’ important West Texas growing region, following months of very dry conditions which have called into question the potential for US output. Significant moisture was deposited towards the end of May, and while more precipitation will be required to ensure the successful development of the crop, the rainfall generally was enough to spur germination and alleviate growers’ most immediate concerns.

Import demand from mills was subdued during most of the period in view, owing to the failure of yarn selling rates to keep pace with very high raw cotton replacement costs. The major exception was India, where local prices soared to all-time highs before retreating modestly in the latter half of the month. The exemption of raw cotton imports from customs duty, introduced by India’s Ministry of Finance in mid-April, gave way to an uptick of import demand from that quarter, but the volume of business concluded continued to be hindered by heavy freight premiums to the Indian subcontinent and an inability on the part of some shippers to guarantee arrival by September 30, after which the import duty is due to be reinstated. Various textiles associations advocated an extension of the import duty waiver, with a date of December 31 mooted. The pleas received a sympathetic hearing in the Textiles Ministry. However, by the end of May no confirmation had been forthcoming.

Spinners in China, meanwhile, remained firmly on the sidelines as the premium of international prices over local offers continued to place import purchases well beyond the bounds of viability. Mill buying in China was in any case at a low ebb as spinners contended with poor yarn demand, exacerbated by the effects of Covid restrictions in major economic centres such as Beijing and Shanghai. The pace at which ginners could dispose of domestic production was also very slow. As a result, ‘commercial stocks’ (excluding the State Reserve and spinners’ inventories) at the end of April were the highest on record for that point of the season.  China’s imports during August/April were over a million tonnes below those in the corresponding period of the 2020/21 season. The outlook for imports in the next marketing year is also uncertain, in the context of poor consumption and the promising outlook for the domestic 2022/23 crop.

Indeed, China barely figured in reports of US export sales published during the month, which at any rate indicated fairly pedestrian increases to the commitment for the current season. By May 19, upland sales were lagging by around four percent behind the same date a year ago, while shipments were trailing by more than 21 percent.

In terms of global production, significant changes were made to Cotlook’s numbers during May. The biggest adjustment was a decline of 340,000 tonnes for 2022/23 output in India, owing to slow sowing and an expectation of lower yield. The Southwest Monsoon made landfall in the final days of the month and is forecast to slightly exceed the long-period average rainfall, which may yet see an improvement of the crop’s prospects. A reduction was also made to Indian production in the current season, as the impact of rains over open cotton last autumn came into sharper focus.

USDA’s first forecast for 2022/23 was placed at 16.5 million bales (roughly 3.6 million tonnes), a figure which we have for the time being adopted. 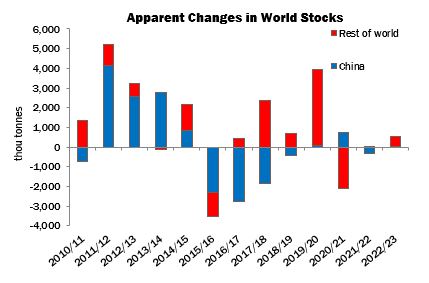 The other major reductions were noted in Brazil, for both this season and next. Dry weather has impacted plants in growing regions this year, while the prospects for the following season may be limited by rising input costs.

As a result of the above adjustments, Cotlook’s world production forecast for 2022/23 is placed at almost 26.4 million tonnes, marking an increase of 4.4 percent from the current campaign.

Substantial cuts were made to our consumption figures for several of the major markets, owing to the poor outlook for cotton yarn and textile demand, largely related to broader macro-economic trends. Cotlook’s figures for this season and next were reduced by 75,000 and 465,000 tonnes, respectively. Global cotton stocks are therefore expected to fall by 424,000 tonnes in the 2021/22 season, but to recover by 467,000 in the following campaign.