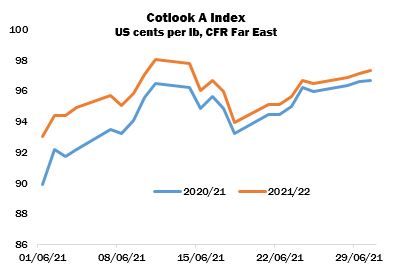 International cotton prices advanced by a considerable margin during June, in reflection of an upward trend in New York futures. The Cotlook 2020/21 A Index ended the period 680 cent points above its opening level, while the forward 2021/22 Index rose by 430 points. The differential between the indices therefore narrowed from over 300 cent points at the beginning of the month, to just 60 points by June 30.

The rise in prices was supported to some degree by a generally bullish mood in other commodity markets, but the major drivers for asking rates were the outlook for US supply, adjustments to which sparked quite sharp price moves, and the increasing tightness of nearby shipment cotton. The advance of prices mid-month was prompted by the release of USDA’s June assessment of supply and demand, which included increased export projections for both the current season and 2021/22. As a result, the estimated carryover on July 31, 2021 was reduced to 3.15 million bales and next marketing year’s ending stock lowered to 2.9 million. This would be only the fourth time that ending stocks have dipped below three million bales since the turn of the century.

The increasing tightness of nearby supply was exacerbated by persistent logistical issues in some of the world’s major ports. Availability of containers is very restricted, and some important destination ports, most notably Bangladesh, are experiencing significant congestion and delay. Some shippers have declined to accept new bookings for that country. Even cotton from those origins which are not experiencing as severe freight issues, meanwhile, is generally well committed: many shippers are now unwilling to offer Brazilian for August shipment, for example, to the frustration of mills with full downstream order books. That growth would usually be relied upon to bridge the gap between Northern Hemisphere crops. Hence, any cotton available nearby was a target for broad-based demand during June as spinners competed to cover their summer requirements.

Merchants reported that Chinese state-owned trading enterprises were regularly monitoring international asking rates and made some price-testing enquiries, but those enquiries failed to result in any significant import business during the month. Another point of interest in China was the fate of the huge volume of cotton consigned at Chinese ports, a large part of which is thought to belong to said SOEs. Trade estimates place the volume in bonded areas at China’s ports as high as 600,000 tonnes. The long anticipated allocation of mills’ Sliding-Scale import quota would presumably see the movement of at least some of those consignment stocks, but no confirmation has yet been forthcoming and for the time being Chinese buyers have failed to enter the international market on a significant scale.

The recent paucity of demand from China was reflected in US export sales reports during June, wherein that destination barely featured as a buyer. Thanks to active purchasing earlier in the season, by the week ended June 24, China accounted for around 30 percent of the current season’s upland and Pima commitments, and just nine percent of the total for 2021/22. Overall, US sales by the same point were around 105 percent of USDA’s June forecast of 16,400 480-lb bales, while the volume shipped was almost 90 percent of that number. Meanwhile, upland sales commitments for shipment in the 2021/22 marketing year were the lowest at that point of the season for some years. 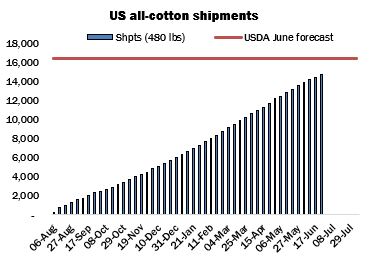 Some significant changes were made to Cotlook’s estimate of global consumption in 2020/21, with upward adjustments for China, India, Pakistan and Vietnam. Spinners have obtained good margins on yarn sales in recent months and encouraging retail sales figures have been released, to the surprise of some observers who had expected a more gradual revival of downstream demand. World consumption in the current season is now placed at 25,329,000 tonnes. Our figure for 2021/22, meanwhile, has been raised to 25,943,000 tonnes, owing to increases for all of the above countries, excluding China. The world total stands only modestly below that attained in the 2017/18 season, before the disruption of Sino-US trade tensions and the Covid-19 pandemic impacted global mill use.

On the production front, the major change for 2020/21 was made to the figure for Brazil, owing to a lowering of yield expectations in the important Mato Grosso producing state. Lower arrivals in India also informed a reduction to expected output in that country, while production in Pakistan was raised to reflect the likely quantity of cotton that has remained ‘undocumented’ in order to avoid sales tax which recently underwent a considerable increase. For 2021/22, the most significant change was made to the figure for United States production, owing to a transformation of the weather over the major West Texas growing region which eased fears over the eventual scale of dryland plantings in that state. 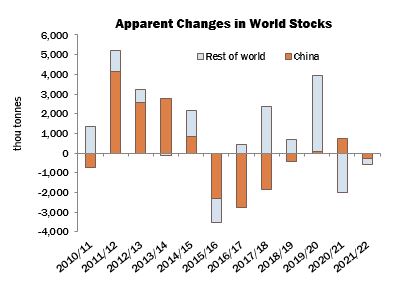