International cotton prices began the month on a strong upward trajectory, influenced by a continuation of the rapid advance of New York futures that had begun in late September. For most of the remainder of the month, prices then moved within a relatively narrow range (at least by recent comparison). However, the market ended the period in a state of virtual collapse, as New York, like other share and commodity markets, reacted to fears arising from the identification of the Omicron Covid variant. The A Index began the month at 123.60 US cents per lb, rose to a high point of 128.45 on November 18, but ended the period at 123.05 US cents per lb.

While the relative stability of prices for most of the month failed to stimulate mill purchasing on a large scale, the perception remained that spinners in various markets were in need of cover for the first and second quarters of next year. The precipitate decline of futures at the end of the period – the New York March contract relinquished 937 cent points in the final three sessions of November – did bring to the surface some of that latent demand for shipment during the early months of 2022.

Spinners’ lack of coverage appears to have resulted from a combination of hesitancy to buy at historically elevated price levels (only in the exceptional bull market of 2010/11 has the Cotlook A Index been higher) and the persistent delays to the shipment of cotton already contracted. Throughout November, the turmoil in the shipping sector hampered the international trade’s endeavours to accommodate its mill customers. As a result, spinners on certain markets are far from assured of their continuity of supply.

While spinners have continued to focus on their more pressing needs, the latest pandemic developments instilled a renewed sense of caution with regard to the outlook for yarn business, especially in the context of historically high raw cotton replacement costs.

In addition to purchasing against their needs for shipment after the year-end, mills took the opportunity of fixing their on-call purchase contracts. The volume of unfixed on-call sales has recently risen to historical highs, only slightly below the all-time peak attained in May 2018. On November 19, those on the March 2022 contract stood at over 6.8 million bales, and those on July 2022 at more than 4.7 million. 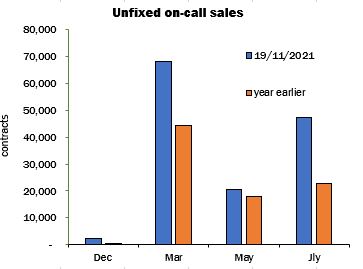 As ever, developments in China remained under close scrutiny throughout the month. Until local prices succumbed to the Covid-related developments described above, a period of relative stability was witnessed on the domestic market. However, owing largely to this season’s ginning overcapacity in Xinjiang and a smaller crop in the region, Chinese prices remained substantially higher than the international market.

Import demand, however, waned during the course of the month, in part due to the depletion of spinners’ unused import quota for 2021. In addition, buying initiative on the part of state-owned trading entities, including the State Reserve, was absent. In an effort to rein in the bullish influences at work on the local market, Beijing sanctioned an unusual extension to this year’s State Reserve auction series. By the end of November, almost 1.2 million tonnes had been disposed of. Traders continue to believe therefore that the last-mentioned organisation will at some point need to replenish its strategic stock, an eventuality with bullish implications for the global market.

The month of November saw no major shifts in the supply and demand balance sheet for the 2021/22 season.

In the Northern Hemisphere, harvests made good progress without any noteworthy weather-related difficulties. The outlook for the major producers in the Southern Hemisphere, where sowing is under way, was enhanced by timely rainfall in Australia, Brazil and Argentina. Cotton Outlook’s forecast of world production rose by just under 100,000 tonnes to 26,043,000 tonnes.
Our forecast of consumption in the current season was unaltered at 26,153,000 tonnes, representing an increase of almost three percent on 2020/21.

At the end of November, estimates of production and consumption for the 2021/22 season were thus fairly close to equilibrium: our figures indicated that world ending stocks by July 31,2022 would decline by a modest 110,000 tonnes. However, the supply from this season’s larger Southern Hemisphere crops is not yet available to the market, and the shipping difficulties alluded to above continue to affect the short-term availability of cotton.