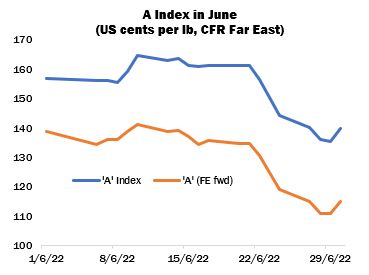 International cotton prices lost considerable ground during June, under the lead of a volatile but still falling New York futures market. Between June 17 and 28, the lead December contract lost 25.75 cents in just seven trading sessions. The Current (2021/22) A Index registered its lowest level since March late in the period, while the Forward (2022/23) Index fell to its weakest since the inception of that price in mid-May.

The fall in raw cotton values was attributed to several factors including macro-economic headwinds which saw speculators exit cotton and other commodity futures markets. The collapse was also associated with increased reports of demand destruction further down the cotton value chain but seemed at odds with a relatively bullish US statistical outlook.

Mill purchasing was limited early in the period by the still historically very firm level of asking rates, the increasing tightness of nearby supply and the well documented logistical issues which have blighted shipments for some considerable time. However, as futures retreated those mills in need of cover for the remainder of this year were tempted to enter the market and some business was arranged.

Spinners in the Indian subcontinent displayed a fairly broad-based demand, with purchases of US, Brazilian, Australian and African Franc Zone in evidence. In India, local values retreated to levels not seen since mid-April, as rumours circulated early in the month that the exemption of raw cotton imports from customs duty, introduced by India’s Ministry of Finance in mid-April, may be extended (in the event, the exemption was extended in the early days of July until the end of October). Import buyers in India were less active in terms of import purchases than their neighbours. Mills in the Far East concentrated mainly on Australian to bridge the gap before new season crops start to move. That origin represented a relatively attractive option in terms of both shipment availability and price.

Reports of United States export sales commitments during the month were revealing in terms of the demand side of next year’s US balance sheet. The wide discrepancy between international and local Chinese prices (at its height, equivalent to more than 45 US cents per lb) has for some time been thought to preclude any nearby volume import purchases on the part of Chinese buyers. However, China appeared as the major destination for purchases of 2022/23 crop in the month, adding more than 750,000 running bales to its commitment for the season ahead, and overtaking several other countries to assume first place in terms of forward purchases of US cotton. Total upland commitments (to all countries) for the 2022/23 season now amount to over four million running bales, which represents the third highest of the past decade by this point in the year. 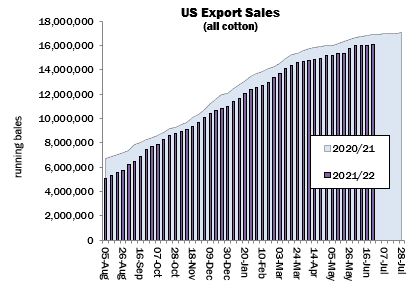 The reappearance of China as a major purchaser of US cotton was also surprising in the context of an ample domestic supply position. Sales of 2021/22 crop have been lagging well behind the customary pace, and ginners’ stocks are therefore unusually high for this stage of the season. It was posited that a state-sanctioned purchase programme of local Xinjiang crop might be in the offing, to alleviate pressure on ginners, whose position was further undermined by the downward trajectory of domestic prices during June. By the end of the month, though, no such plan had emerged.

Beijing’s efforts for the time being appeared concentrated on engineering a broader economic recovery following the easing of Covid restrictions in major business centres including Shanghai and Beijing.

Cotlook’s estimate of Chinese consumption during the current season was unchanged in our June report, at eight million tonnes, but the figure for 2022/23 was reduced to 7.6 million tonnes, the lowest since 2019/20, when the effects of the Covid pandemic were at their height. By the end of May, China’s imports were over a million tonnes below those in the corresponding period of the 2020/21 season, in the face of weak yarn orders and an effective United States ban on cotton textile and garment exports that have an association with Xinjiang (which came into force during the month).

The consumption figures for several major consuming countries were lowered during the period in view, owing to the deepening pessimism with regard to raw cotton and textile demand, with the result that a slight net decline is now forecast for 2022/23. Cotton usage during both the current and forward seasons has been reduced sharply in the Indian subcontinent, with more modest declines in parts of the Far East and Brazil.

On the production front, the United States was the focus of attention during June as drought conditions persisted in the major growing region of West Texas. Forecasts of abandonment in the area mounted during the month, with the result that our US production estimate has been reduced and retains a downward bias.

Elsewhere in the Northern Hemisphere, planting advanced without major setbacks, though yield prospects in a number of major producing countries are uncertain.

Estimates of Brazil’s 2021/22 crop, where harvesting is under way, have been reduced appreciably as yield expectations have been revised downward. 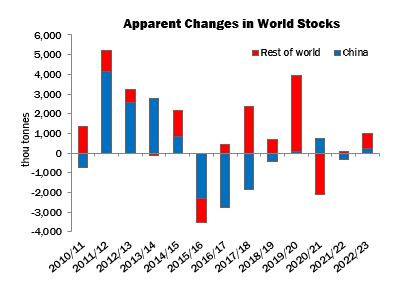