Upland offering rates continued on an upward trajectory throughout January. The Cotlook A Index gained over ten cents during the period to end the month at 137.70 cents per lb. That value represents the highest of the 2021/22 season so far and a level last recorded in June 2011. Firm basis levels and a rising New York futures market reflected bullish cotton fundamentals. March futures closed on the last day of the month with a new contract high settlement of 127.51 cents per lb. 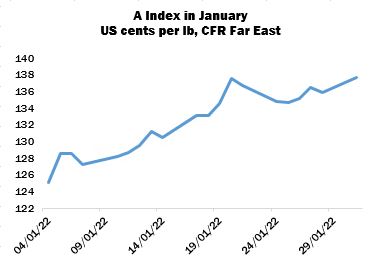 Further support for the bull side was derived from the substantial volume of spinners’ unfixed ‘on-call’ purchases still outstanding on the spot month. According to the Commodity Futures Trading Commission, March unfixed sales contracts were equivalent to 4.36 million bales by January 21, one month from the contract’s First Notice Day.

In the physical market, mills continued to pay very firm prices for cotton available for prompt and nearby shipments, while shippers grappled with the logistical constraints impeding the movement of cotton to various destinations. Worst affected were markets on the subcontinent, which coincidentally were also those on which demand was most active. Border closures in West Africa in response to regional political developments were therefore untimely, in particular for spinners in Bangladesh, the single largest market for African Franc Zone cottons.

Chinese demand continued to feature intermittently, with state-owned trading entities credited with the bulk of new purchases. Mills in receipt of their 2022 raw cotton import quotas appeared more cautious buyers prior to the Lunar New Year holiday. Customs data revealed that December imports were less than 140,000 tonnes, and the total for the first five months of the international season amounts to barely 40 percent of arrivals during the corresponding period a year earlier. Cotlook’s forecast of China’s imports in 2021/22 was reduced by 500,000 tonnes to two million. 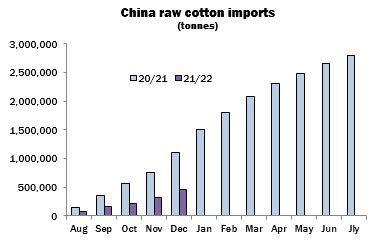 The United States Department of Agriculture’s January supply and demand report included a reduction to the forecast of output from the domestic crop that was unexpected at this relatively late stage of the season. The estimate was cut by 660,000 480-lb bales (144,000 tonnes) to reflect a lowering of yields in various producing states, most significantly in Texas. That adjustment more than offset a decrease of 500,000 bales to the Department’s forecast of exports in 2021/22, which now stands at 15 million bales.

The lower export number reflected the disappointing progress of shipments so far this season. Sales registrations, by contrast, remained brisk during January. Those by January 20 were already equivalent to over 80 percent of Washington’s projection for the marketing year and seem likely to surpass that volume, perhaps by a substantial margin. The tempo of shipments, however, continued to run at well below the average required.

The other significant adjustment to production forecasts in January concerned India. The failure of arrivals to reach the expected level during December prompted a reduction of 212,000 tonnes to 5,780,000 (34 million bales of 170 kgs). That change all but eliminated the country’s exportable surplus, whereas (according to the Cotton Association of India) exports during the October/September domestic season are forecast at 815,000 tonnes.

The resultant tightness of the local supply position has been expressed in sharply rising domestic prices that broke successive records during January. Our Indian quotation, so often the cheapest of the basket from which the Cotlook A Index is calculated, moved outside that selection. In fairly short order, the country has thus shifted from a potential supplier of cotton to the international market to an emerging source of import demand.

The escalation of domestic raw cotton and cotton yarn prices also prompted calls for government intervention, for example to withdraw the import duty levied on imports of raw cotton in the 2021 budget. Various meetings of stakeholders took place but no official decisions were made prior to the 2022 budget proposals, due on February 1.

Lower figures for the US and India resulted in a lowering of Cotlook’s production forecast for the 2021/22 season to 25,669,000 tonnes, implying a reduction in world stocks by the end of the season of 253,000 tonnes. 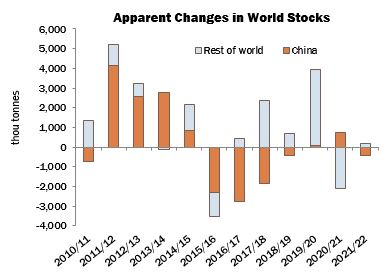 Forecasts of output in the Southern Hemisphere meanwhile show an upward bias. Planting is progressing well in Brazil, while in Australia the development of plants has recovered from an indifferent start, assisted by warmer conditions. The two crops account for a significant proportion of the rise in world production forecast for the current season and may prove crucial to the continuity of supply to the world market prior to the movement of the 2022/23 Northern Hemisphere crops towards the end of the year.

Planting intentions for next season will come into sharper focus over the coming months, and Cotlook’s initial forecast of world production and consumption in 2022/23 will be published in the February 24 issue of Cotton Outlook. The prospects for the US will be under scrutiny over the coming weeks. At the end of January, the December contract in New York closed above the dollar mark for the first time, ostensibly providing a strong incentive to plant cotton. Early assessments, however, are qualified by a number of caveats. Prices for crops that compete with cotton are also strong, and rising input costs may affect cotton disproportionately. Above all – and not for the first time – the severity of the drought prevailing in West Texas heralds uncertainty with regard to the rate of abandonment and dryland yields in that major producing region, unless copious rains are received before planting time.