At the end of December, the Cotlook A Index – the barometer of the world cotton market – posted its highest value of the 2020 calendar year at 84.6 cents per lb. Upland offering rates continued to strengthen during most of January. The advance was again led by New York futures, which shared the buoyancy exhibited by other commodity futures markets and by financial assets more generally. Various share indices reached new heights during the month. The prospect of an additional huge stimulus package promised by the incoming US administration also contributed to the bullish mood of many investors. However, the market ended the month on the defensive: the A Index retreated to 86.60 cents per lb, having peaked at 89.10 on January 22. 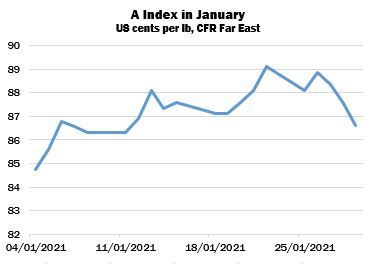 Support for cotton futures was also observed from a fundamental perspective. The Department of Agriculture’s estimate of US production was adjusted sharply downward for a second consecutive month in the January supply and demand report. The figure was decreased by about one million bales to just under 15 million (statistical bales of 480 lbs). Texas accounted for the whole of the reduction made in December and about half of this month’s revision. Upland yields in Texas were revised downward to 627 lbs per acre (versus last month’s 648 lbs/acre), but are still somewhat higher than the 578 lbs recorded in 2019/20. USDA’s estimate of area harvested was reduced from 3.85 million acres in December to 3.6 million, implying abandonment of almost 47 percent.

USDA also increased its forecast of exports during the season by 250,000 bales to 5,250,000, an adjustment that seemed amply justified by the export data reported over the previous weeks (and which continued during the remainder of January). Export sales of all cotton by January 21 were within about 12 percent of Washington’s projection, which already appeared to err on the side of caution. 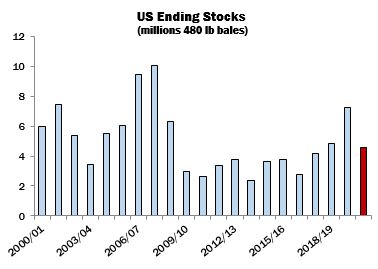 Falling production and rising exports made another substantial dent in the season’s projected ending stocks. At 4.6 million bales, the carryover appears much more manageable than the seven million bales plus forecast earlier in the season and casts a potentially bullish light on the outlook for the 2021/22 marketing year.

Last but not least, the strength of mill demand in the physical market consolidated the positive mood of the global cotton market. Many mills had allowed inventories to dwindle by dint of a hand-to-mouth buying policy, influenced by pandemic-related uncertainties. The recent revival of textile supply chains thus stimulated broad-based purchasing against spinners’ more pressing requirements. Some tentative forward enquiry surfaced during the period but the principal focus remained on the nearby shipment period.

China was a major driving force in international cotton demand, reflecting both a continuation of politically inspired buying in compliance with the Phase One trade agreement entered into a year ago and the disparity between local and international prices. Although much reduced, by the end of the month, the gap remained significant. In mid-January, the customs authorities in China disclosed an import volume for the previous month of 350,000 tonnes – the largest for seven years. The principal suppliers were Brazil (contributing 39 percent to the total) and the United States (35 percent). 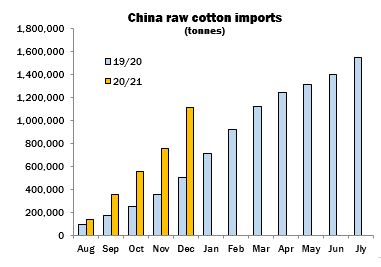 January saw a modest net increase in Cotlook’s forecast of global raw cotton production during the 2020/21 season. The sharp fall in the estimate for the United States discussed above was more than offset by an increase for China. The higher figure reflects the latest ginning data, which have confirmed earlier reports that yields this season have been particularly good in most parts of Xinjiang.

A further improvement in the consumption outlook is attributable mainly to higher estimates for India and Turkey, which are partially mitigated by decreases for Indonesia and a number of other South East Asian countries.

The net result of adjustments to supply and demand since late December is an increase in the margin by which world stocks are projected to fall by the end of the current season, from 325,000 to 466,000 tonnes. That reduction, however, remains very modest in comparison to the addition to world stocks of nearly four million tonnes that resulted from Covid-related disruption to supply chains during the 2019/20 marketing year.