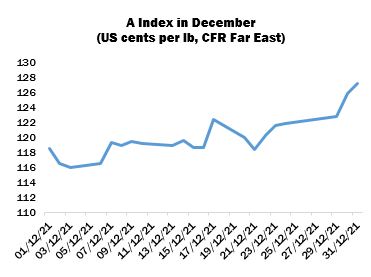 International cotton prices resumed their upward trajectory in December, marking the sixth month out of the past seven during which asking rates advanced. The Cotlook A Index registered its low point for the period on December 3 (116 cents per lb), before ending the month over 11 cents higher, at 127.20. In 2021, the A Index began at its lowest level for the calendar year, of 84.75 US cents per lb, and crossed the dollar mark – a rare occurrence – in late July. The Index registered a high point of 128.45 in mid-November. The average for the 12-month period was historically high, at 101.39 cents, compared with 71.98 in 2020. 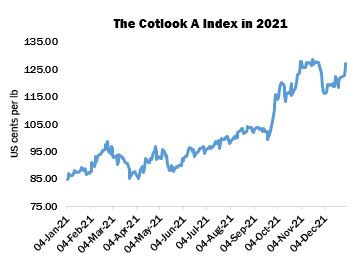 Import demand during December was relatively broad-based, and concentrated mainly on lots available to cover first and second quarter requirements. However, the capacity of the trade to accommodate buyers continued to be limited by execution constraints. Further forward, sporadic price testing enquiry was in evidence but the volume of business concluded was modest, influenced by uncertainty regarding the direction of prices and the potential for further volatility in shipping rates.
The approach of the year-end brought into clearer focus the severe shortage of supply, in Bangladesh particularly. Spinners’ inventories were understood to be running very low and the situation may worsen, should deliveries scheduled for the first quarter once again fail to materialise. Some mills would in that instance be forced to curtail their operations. Bangladesh’s garment export earnings, meanwhile, remain strong, as the most recent data continue to demonstrate.

Generally, import purchasing from China was subdued and most traders anticipate that a stronger demand will be forthcoming from spinners once they receive allocations of this year’s tariff-rated import quotas (typically from mid to late January). State-owned trading enterprises were actively testing prices during December, predominantly for US lint, but the intentions of the State Reserve, which will at some point be required to replenish its stocks, for the moment remain difficult to discern. Chinese prices remained substantially higher than those on the international market towards the end of the year, but the differential narrowed considerably from that in evidence a few months ago.

China continued to appear as a major buyer in reports of the United States’ export sales registrations in December. By the end of the month, that destination accounted for over 30 percent of the total upland commitment for shipments in the current season. In general, demand for US cotton kept pace with expectations: by December 30, export registrations (for upland and Pima) stood slightly below 11 million running bales, representing over 70 percent of USDA’s projection of exports for the 2021/22 season, of 15.5 million statistical bales. However, shipments remained well behind the pace that is required for the forecast to be achieved. Exports are of course hindered by persistent logistical constraints.

Changes to Cotlook’s estimates of global production in December were modest. The majority of Northern Hemisphere harvests are finished or approaching completion, and for the most part weather conditions have not caused any major issues. The biggest adjustment was made to our figure for India, where slower than expected arrivals prompted a reduction to our output number of 178,000 tonnes, to below six million tonnes.

Optimism with regard to output in the Southern Hemisphere accounts for a considerable proportion of the expected rise in world production this season (from just over 24 million tonnes in 2020/21 to 26 million). Sowing progressed well over the month, and both Australia and Brazil are likely to see a substantial rise in.

On the consumption front, the only major adjustment to our numbers in December was a reduction for China, of 200,000 tonnes, informed by mounting evidence that yarn orders are slowing and mill use will take a hit in 2021/22. Cotlook’s number currently indicates a decline of close to two percent between this season and last. Globally, however, mill use looks set to remain robust: consumption is forecast to recover to a level slightly below the recent peak witnessed in 2017/18, supported by the above mentioned resilience of downstream demand. 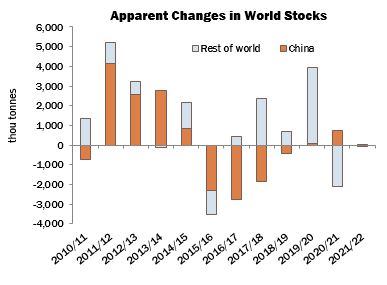 Taking the above numbers into account, our assessment of the change to world stocks envisages a modest increase by the end of this season, of 27,000 tonnes (compared with a fall of 110,000 a month earlier), with the rise occurring entirely outside China.