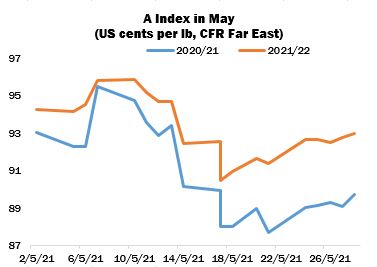 International cotton prices moved lower throughout most of May, in tandem with a sharp decline in ICE futures, before regaining some ground late in the month. The Cotlook 2020/21 A Index ended the period 335 cent points below its opening level, while the forward 2021/22 Index declined by a gentler margin, of 125 points. That dynamic reflected the shifting spread between the ICE July and December contracts, which displayed an inverted position until December assumed a premium over the nearby contract on May 20, for the first time since its inception. The differential between the indices was virtually eroded early in the period, when the values came within 30 points of each other largely owing to a sharp increase in the nearby value, but subsequently widened out to over 300 cent points by the end of the month.

Business became more vigorous in the latter half as the cheapening of trade offers into the 80s elicited a broad-based mill demand: spinners in the major consuming markets are generally in possession of robust downstream orders and moved to cover their requirements at levels considered relatively advantageous. Nearby shipment cotton was the major target of demand, particularly African Franc Zone lint, while spinners with a preference for machine-picked cotton turned to US and Brazilian, nearby availability of which has become quite restricted. However, traders’ now depleted long positions proved quite difficult to replenish from origin, as the market’s decline discouraged growers from disposing of their remaining supplies in any hurry.
Import demand from China emerged to some extent following the Sliding-Scale quota announcement in late April. It is understood that some mills received confirmation of their quota allocations as the month progressed, and the relationship between local cotton vis-à-vis international supplies (as measured respectively by the China Cotton Index and Cotlook A Index, adjusted to comparable terms) presented a price advantage of over 12 cents per lb at its widest point. Various state-owned entities (including, it is understood, the State Reserve) continued to monitor international offering rates. However, another month passed without any major purchases, and the likelihood that state-sanctioned import purchasing will take place on a large scale this year is coming under question.

By virtue of earlier active purchasing, China has nonetheless been by far the largest destination for US cotton during the 2020/21 season. By the week ended May 20, China accounted for some 32 percent of US upland export commitments for the current season, but just 12 percent of the running total for 2021/22.

The current season’s US supply position has continued to tighten, influenced by the pace of export sales and, in particular, shipments during the month. USDA’s May supply and demand estimates raised the export projection for the season by 500,000 bales (480 lbs) to 16.25 million. As a result, projected ending stocks were reduced to 3.3 million bales, versus an opening stock of 7.25 million. 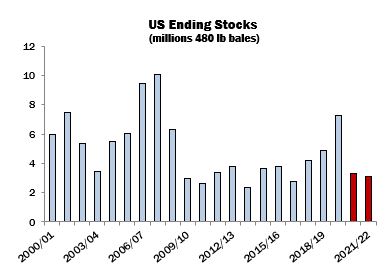 May also saw release of the Department’s first detailed estimates for the 2021/22 marketing year, including the first assessment since February of the outlook for the domestic crop. At seventeen million bales, the forecast was at the upper end of the range of private projections, which were coloured by the uncertain outlook for dryland cotton in West Texas. However, the outlook has improved considerably during May, with the receipt of good rains in this important growing region. Given the poor moisture in the sub-soil, abandonment on a significant scale cannot be ruled out but enough precipitation has now been received to support sowing and germination.

The major change to Cotlook’s estimates of production during the month concerned China, where constraints on the availability of water for irrigation have led to assumptions of a lower planted area in Xinjiang. Unhelpful weather early in the growing season also cast doubt on the eventual size of the crop: our figure has been reduced by 260,000 tonnes, implying the smallest output since 2016/17. In the Southern Hemisphere, reports from Australia remained very positive, both as regards the yields obtained from the 2020/21 crop, harvesting of which is under way, and in respect of the outlook for 2021/22, now that reservoirs have to some extent been recharged. A further upward adjustment for that country saw Cotlook’s figure for the 2020/21 season rise to four times the magnitude of the previous crop.

World consumption was little altered in the month, with the biggest change taking place in India: a relatively modest reduction of 45,000 tonnes was made to that number, owing to Covid-related disruptions in the textiles market. In general, though, mill use has made a strong recovery from the 2019/20 season, during which the Covid-19 crisis was at its height. The year-on-year increases forecast for this season and next are placed at 13 and seven percent, respectively, which would restore global consumption to within 350,000 tonnes of that recorded in 2017/18. As a result of the above adjustments, by the end of the 2021/22 season, world stock levels are expected to have been reduced by almost 530,000 tonnes.