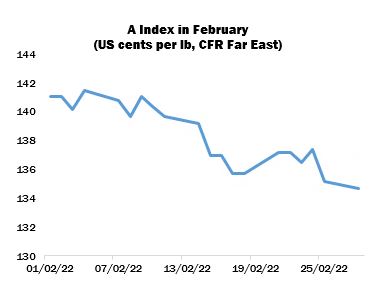 International cotton prices reversed direction from their recent trajectory to move lower in February. The Cotlook A Index registered its high point of 141.50 US cents per lb early in the month, and finished the period almost seven cents below that level, at 134.65 cents. The fall was precipitated mainly by geopolitical tensions in Eastern Europe. Cotton saw a short-lived spike following Russia’s invasion of Ukraine, in sympathy with grains (the latter country being a major exporter of cereals), but generally the upheaval resulted in downward pressure on prices.

The decline of futures facilitated substantial fixations of on-call purchase contracts ahead of March’s First Notice Day, as well as prompting import buying on the part of mills, predominantly to cover the still significant second quarter requirements of many raw cotton consumers. Broad-based enquiry was reported with a focus on US and Brazilian lint predominantly, as well as some African Franc Zone parcels. Mills in Bangladesh continued to plug gaps in their nearby supply, mainly with Indian cotton. In general, forward enquiry was reported with more frequency than of late, in part on price considerations: during the period under review, the inverted July/December spread did narrow modestly, but remained substantial, closing at more than 15 US cents per lb.

Demand from mill buyers in China was evident, though perhaps not on the scale that was anticipated following their return from holiday early in the month and the receipt of 2022 tariff-rated quota allocations. According to a survey by Beijing Cotton Outlook, over a quarter of mills remained closed for more than a week, with some not returning to work until the latter half of February. Many Chinese spinners appear in no hurry to use this year’s import quota in the face of poor demand for yarn and very narrow profit margins, as well as an uncertain outlook for downstream demand. State-owned trading enterprises, meanwhile, continued to display price-testing enquiry for cotton from various origins, up to the fourth quarter of this year. The potential for a spate of import buying to replenish state reserve warehouses, in the event that Beijing deems necessary an auction later this year, remained a point of conjecture in market circles.

China continued to appear in reports of US export sales, which were generally of fairly routine proportions in the month. By the week ended February 24, combined outstanding sales and accumulated shipments for China were nearly four million running bales, representing over 30 percent of the total for the 2021/22 marketing year. The weekly global shipment number remained considerably behind the pace that would be required to fulfil USDA’s projection for the season, despite a marketing-year high in the last report of the month. However, given the scale of the current season’s existing sales commitments, it appears likely that a substantial volume will be carried forward to next season and thus boost export potential for 2022/23. Forward export sales of upland cotton to be shipped next season are already appreciably ahead of the same moment in 2021.

The outlook for supply and demand in 2022/23 has begun to come in to clearer focus, and Cotlook’s initial estimates for production and consumption next season were published on February 24. As always, these early projections are accompanied by strong caveats, given that sowing of cotton has yet to begin in the Northern Hemisphere and forecasts of consumption concern a period that will not begin for several months. The numbers will be subject to change as weather and market-related influences come to the fore, including the relationship between cotton futures and those of other crops during the conflict in Eastern Europe, and how that may affect farmers’ intentions as the spring planting period approaches. Some early indications have already suggested that the rising cost of inputs, considering Russia’s position as a major supplier of fertilisers, may have impacted the economics of cotton production more severely than some competing crops.

Our first tentative forecasts place world production at 26,903,000 tonnes, an increase of 4.7 percent on the previous season, and second only to the volume estimated to have been produced in 2011/12 following a period of record world prices. 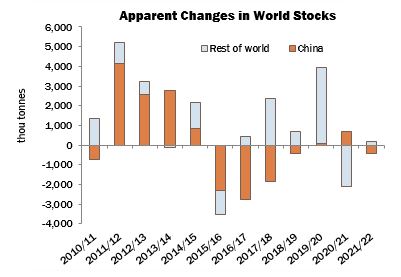 Consumption, meanwhile, is forecast at a record 26,738,000 tonnes. The profitability of spinners in recent months has remained robust, and has prompted a wave of new investment in spinning capacity. Therefore, our initial estimates suggest that production and consumption will be fairly close to equilibrium in 2022/23, ending with a modest increase of world stocks by the end of the season.