March saw a significant downturn of international cotton prices, which had reached a peak in late February. The strong upward momentum in evidence since the turn of the year, and indeed since early April of 2020, has suffered its first major setback. The Cotlook A Index reached a low point for the month of 85.10 cents per lb on March 26, down from the high of 98.50 cents per lb on February 24. 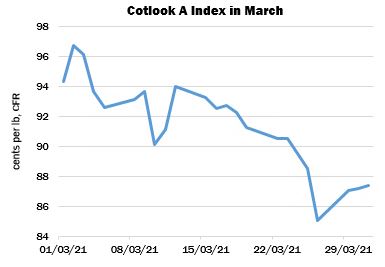 The sudden fall was precipitated by a collapse of New York futures that took the market by surprise and confounded the bullish consensus in evidence since the turn of the year. A clear explanation for the speculative sell-off in New York has remained elusive but commentators concur that it is only tangentially (if at all) related to cotton fundamentals. Other commodities have suffered a similar reversal but that affecting cotton does appear to have been particularly severe. 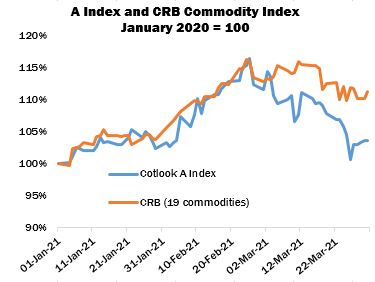 Daily fluctuations in the No. 2 contract were frequently volatile during March: the May contract recorded three-digit fluctuations (based on the close) at the end of 10 of the 23 sessions that took place during the month, and closed down the permissible four-cent limit on two occasions.

Yet the fundamentals that had fuelled the market’s earlier positive price expectations remained broadly in place. The most significant of these influences is a tightening cotton balance sheet in the United States.

The Department of Agriculture’s March supply and demand estimates included a reduction to the domestic crop that was not unexpected in the light of the latest ginning and classing data. USDA’s export projection was left unchanged at 15.5 million bales, a figure that appeared conservative then and seemed even more so in the context of the strong pace of sales and shipments reported during the second half of the month. By March 25, combined sales commitments of upland and Pima were already in excess of Washington’s forecast for the season. Shipments reported during the month remained comfortably ahead of the average pace required to meet that projection. 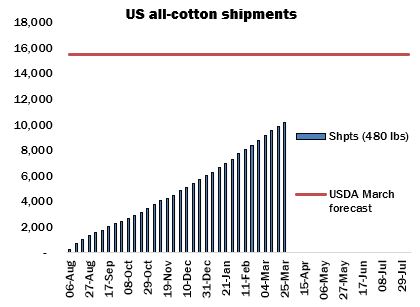 The prospect, therefore, is that the 2021/22 marketing year will begin with a carryover below four million bales (versus USDA’s March figure of 4.2 million), a major reduction from the current season’s beginning stock of 7.2 million. That reduction would seem to have bullish implications for the season ahead, in particular if China remains a major export market.

By March 25, US sales of upland cotton to China were more than double those of the previous season, whereas commitments to other markets were down by nearly 25 percent. A significant part of that uplift can be attributed to government-inspired purchases in compliance with the Phase One trade agreement signed in January 2020. The widely held assumption is that buying will continue during the 2021/22 season, hence the generally bullish outlook alluded to above. The tense state of Sino-US relations, however, as manifested at the bilateral meeting held in Alaska, continue to affect commodity markets including cotton. The implications of some clothing brands’ aversion to an association with raw materials or goods sourced from Xinjiang, and the backlash against those brands from the Chinese consumer, were widely debated in international trade circles in late March.

On March 31, USDA released its annual Prospective Plantings report, which placed US cotton area for the 2021/22 crop at just over 12 million acres. That figure compares with the projection just below 11.5 million acres advanced by the National Cotton Council of America in February and was very close to trade expectations. As usual, the overall size of the US crop will be influenced not only by the area planted but also by the scale of abandonment and the dryland yields achieved in the major West Texas producing region. Some welcome rains were received during March but given the severity of the drought affecting the region, these were insufficient to transform the situation.

The same cannot be said of Australia, where the heavy rainfall that wrought havoc in urban centres along the eastern seaboard also served to replenish major river systems in the interior. Reservoirs have been recharged to some extent. Thus while the downpours were unwelcome in those areas where cotton from the current crop was already open and ready for harvest, the prospects for the next crop seem to have improved substantially.