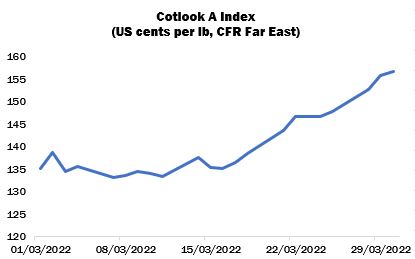 International cotton prices resumed their upward trajectory in earnest during the second half of March, prompted by a dramatic rise in New York futures. The Cotlook A index fell to its low point of 133.15 US cents per lb early in the period, and rose to 156.55 on the last day of the month, its highest level since June 2011.

Market attention was of course dominated during the month by developments unfolding in Ukraine. Cotton futures initially failed to follow the spectacular advance of grain markets, in particular wheat, but made up ground from around the middle of the month. The implications of the conflict for the price and availability of fertilisers was a further major concern in the context of input costs that were already rising.

The steep advance of raw cotton prices was influenced by several bullish factors, including the large number of outstanding on-call contracts awaiting fixation on the May and July futures contracts, a tightening US balance sheet for current season and increasingly worrisome drought in the major US growing region of West Texas (more of which below) and persistent freight disruption. The volatile behaviour of futures prompted mills generally to approach purchases with caution. Any shippers able to guarantee delivery in the second quarter were able to command very firm prices, but a scarcity of current crop supply, as well as a lack of available vessel space, rendered the volumes of nearby business concluded relatively modest.

Yarn prices, meanwhile, failed to keep pace with the latest sudden rise in raw cotton replacement costs and by the end of the month, many mills found they were no longer profitable at current levels. However, those same spinners had enjoyed very good remuneration in recent months and most mills may be able to weather the inversion of their margins for the time being.

The relationship between Chinese and international prices (as measured by comparing the CC Index with the A Index adjusted to local terms) underwent a transformation during March. Whereas for many months the latter value had traded at a significant discount to Chinese offering rates, late in the month that dynamic was reversed, and by March 31 import offers had moved to an equivalent premium of almost 11 US cents per lb.

The timing of such a reconfiguration was unwelcome on the part of Chinese mills, who unlike their international counterparts have for some time been spinning local cotton at a loss. On the cusp of allocation of this year’s Sliding-Scale quota, which may have provided Chinese mills with some relief, international parities skyrocketed and rendered any import buying intentions largely unworkable.

That being said, China continued to appear as the major destination in United States export sales reports released during March. Net additions to the overall commitment remained robust, and by mid-month had already exceeded Washington’s projection for the season (14.75 million statistical bales of 480 lbs). Shipments maintained the improvement observed since late January and registered a marketing-year high in the week ended March 17. However, with that exception, export numbers were well behind the average required to meet USDA’s projection.

Cotlook’s March estimate of global production in 2021/22 was lowered by 165,000 tonnes, to slightly more than 25,500,000 tonnes, while the figure for next season was unchanged from our initial estimate of 26,903,000 tonnes, which if achieved will be the second largest world crop on record. However, the outlook for 2022/23 became less clear during the month, owing to various macro-economic and weather factors.

The biggest change for the current season concerned India, where it now seems certain that the crop will fall well short of initial expectations. Disappointing seed cotton arrivals prompted a reduction of our production number to 5,525,000 tonnes, the lowest since 2009/10. That fall was partially offset by modest increases for China, in accordance with the latest ginning data, and Brazil, to reflect the positive tenor of field reports.

As for next season, the United States Department of Agriculture released its Prospective Plantings report on March 31, to little fanfare. The figure of 12.2 million acres was largely within market expectations but may not have captured the full impact of the rise in cotton futures from mid-March. In addition, the severe drought affecting West Texas renders large-scale abandonment increasingly likely, should significant precipitation not be received before the planting window opens. Hence, the outlook for US production in 2022/23 remains subject to considerable change.

On the consumption front, the only changes made were for China: Cotlook’s numbers for the current and next seasons were lowered by 200,000 and 300,000 tonnes, respectively. The above-mentioned difficulties experienced by Chinese spinners this season were of course a factor in the reduction, as were the large unsold yarn stocks in spinners’ hands, the ongoing Covid restrictions, and concern as regards retail customers’ sourcing policies.

Taking the above adjustments into account, world stocks by the end of the current season are expected to decrease by 219,000 tonnes. Conversely, Cotlook envisages an increase of global stock levels by July 31, 2023, of 465,000 tonnes. 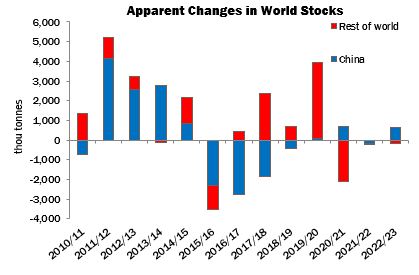