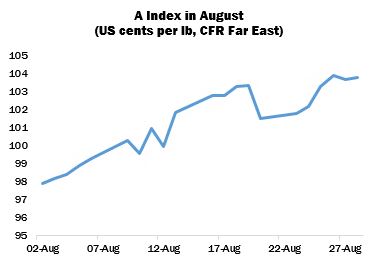 International cotton prices continued to present a firm appearance in August, driven principally by increasingly tight availability of cotton for nearby shipment and the balance of fundamentals, including the lowering of the United States Department of Agriculture’s domestic crop estimate. The Cotlook A Index began the period at its August low point of 97.90 US cents per lb, and registered a fresh high late in the month, of 103.90 cents per lb, a level not witnessed since February 2012. After crossing the dollar mark mid-month, the A Index remained above that level for twelve consecutive sessions, with little to indicate that a fall in prices was imminent.

The volume of business concluded in August was constrained, although not by a lack of demand (indeed enquiry was broad-based and directed towards almost any lint offered for sale nearby, despite high prices), but rather by the persistent disruption that has continued to blight the freight industry, as well as the very well sold position of many origins that would usually be relied upon to bridge the gap between seasons. Some shippers went as far as to suspend their offers for shipment up to the year-end, and concentrated on securing delivery of those lots that should have arrived at their destination ports sometime in the second quarter of 2021.

Spinners in Bangladesh increasingly turned to Indian cotton, delivered over land, to fill their urgent requirements, owing to the short lead time in comparison to shipment cotton, while in the Far East, Australian attracted the bulk of attention, again made more attractive by its geographical proximity to those consuming markets.

More forward demand emerged during the period, possibly in an attempt by spinners to avoid the inherent risks of relying on nearby availabilities in the months ahead, should the problems in global shipping persist. Owing to the historically high level of world prices, forward purchases during August were generally conducted ‘on-call’ New York futures, with a view to fixing when a dip in prices presents itself. Forward offers from trade sellers meanwhile reflected very firm basis ideas, influenced by high raw replacement costs and the knowledge that international freight rates could yet climb higher.

Mill demand in China remained focused predominantly on State Reserve cotton and stocks on consignment at ports. Demand for the former was so robust that non-spinners were barred from participating in the auctions, in an effort to secure a smooth supply for the domestic spinning industry. Despite this, daily catalogues continued to sell out, and by the end of the month the volume sold stood at almost 400,000 tonnes, representing two thirds of the total volume to be offered. Sporadic enquiries for shipment cotton from state-owned entities were discerned during August and some business was done in that vein, but the intentions of the State Reserve as regards replenishing stocks remained largely imponderable. Furthermore, from the perspective of mills in possession of quota, the willingness of international shippers to commit to guaranteed delivery before the end of February in the current environment, with the risk of heavy penalties if the deadline is breached, appeared in question. 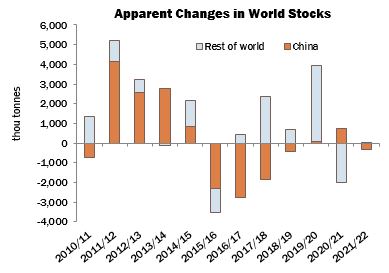 China featured as a major destination for US export registrations in the first half of the month but volumes reported for that country subsequently diminished. By the week ended August 26, China accounted for almost 15 percent of the upland commitment for shipment in 2021/22, and just 1.3 percent for the following season. Total sales commitments of upland and Pima cotton (to all countries) for 2021/22 stood by late August at slightly above 5.92 million statistical bales, compared with 7.46 million by the same point last season.

The outlook for production in the US came under close scrutiny during August, as the crop entered a crucial period. The above-mentioned decrease to Washington’s assessment of US output, resulting from a lower assessment of yields in Texas, took many observers by surprise. Cotlook’s figure meanwhile was maintained at 18 million 480-lb bales, above USDA’s 17.26 million. A clearer picture may emerge following the Department’s September forecast, by which time it is assumed that extensive field surveys will have been carried out. However, the situation was complicated by the approach late in the period of Hurricane Ida to the Southeast coast, a storm which appears likely to have caused at least some damage to maturing plants.

Uneven distribution of Monsoon rainfall in India, as well as the associated slow expansion of planting, prompted a reduction to our figure for that country. In African Franc Zone producing countries, meanwhile, the outlook was improved somewhat by receipt of good moisture and a better than expected cultivated area overall. Global production in 2021/22 is forecast to recover to around the level seen in 2019/20, before last season’s collapse. As a result of the above adjustments, our assessment of production in the current season is placed at 25,762,000 tonnes, an increase of almost seven percent from 2020/21.

Cotlook’s estimate of consumption was little altered in August and remains just above the 26 million tonnes mark, a level that was last realised in 2017/18. The swift improvement in mill use is expected to continue, barring any major unforeseen disruptions to demand. Hence, world stock levels by the end of the 2021/22 season are expected to have fallen by 285,000 tonnes, compared with 240,000 a month ago, with a decline in China more than offsetting a virtually negligible increase in the rest of the world.