The increase in activity in the Egyptian export market has continued for a second successive week.  New registrations in the seven days to December 10 amounted to just short of 9,000 tonnes, while over 2,000 tonnes were shipped. The total commitment has thus risen to 39,008 tonnes, over 40 percent more than at the same moment last season.  India remains the largest customer so far, with 41 percent of registrations. Pakistan is in second place with 35 percent and China has increased its share to 12 percent of the total. The prices recorded were higher than last week: Giza 94 was sold at an average of 124 cents per lb, up five cents; Giza 86 found buyers at 119 cents per lb, compared with 114 last week. 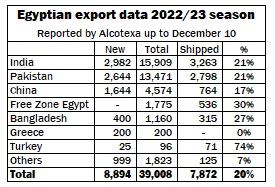 At yesterday’s seed cotton auction, a further 342,000 kantars were sold, at equivalent lint prices ranging from 138 to 185 cents per lb, farm gate.