International cotton prices stabilised to trade within a narrow range during September, influenced by modest fluctuations in New York futures over the same period. The Cotlook A Index started on September 1 at 70.85 US cents per lb and ended virtually unchanged from that level. The highest and lowest values registered in the period were 72.10 and 69.80 US cents per lb, respectively, representing a range of just 230 cent points. 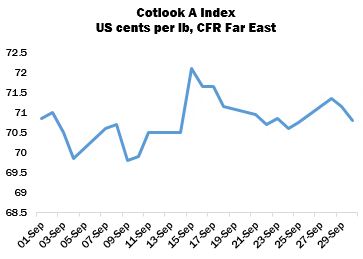 The sideways direction of prices largely alleviated the recent pressure on basis levels, which saw some stability during September, to the relief of international traders. Mills in various countries that have in recent months worked through a significant portion of their inventories were persuaded to enter the market to cover their nearby requirements. Brazilian lint remained the most sought-after origin, with competitively priced lots continuing to attract a fairly broad-based demand. Spinners in Bangladesh and Pakistan were actively enquiring for that origin as well as African Franc Zone lots. Generally, Far Eastern markets remained relatively subdued, but as the month wore on pockets of demand did begin to emerge, most notably from Vietnam, South Korea and Taiwan.

US export sales reported during the month continued to be dominated by China, ostensibly as part of the state-sponsored purchasing that has been going on for some months now in order to fulfil the terms of the Phase One trade agreement signed in January. Shipments of US cotton so far this season have been robust, exceeding two million running bales before the end of September. Of the total, exports to China accounted for almost half of accumulated exports by September 24.

Chinese demand for ‘outside’ growths was also prominent in the month, mainly Brazilian, although competitively priced Indian lots purchased by international shippers from the Cotton Corporation of India’s stocks earlier in the year also found some buyers. The upturn in business coincided with the Chinese government’s announcement that 400,000 tonnes of ‘processing trade’ quota (under which finished textile goods must be exported in order for duty to be waived) would be made available to non-state entities, under the Sliding-Scale price mechanism. However, factors other than price appear to be a major consideration for Chinese import buyers: during September the US House of Representatives passed legislation that would place additional obstacles to the entry of textile imports containing cotton from China’s major Xinjiang region, owing to humanitarian concerns. That sentiment was echoed by several major retail brands, and if maintained could have a potentially far-reaching impact on the future of textile and garment trade flows.

The Chinese State Reserve auction series came to a close on September 30, having disposed of over 500,000 tonnes of lint in its three-month run (almost all of the catalogue offered for sale), around 55 percent of which was Xinjiang cotton. By Cotlook’s calculation, the volume of lint now residing in state warehouses (including Xinjiang cotton purchased earlier in the year, as well as imported lots) is roughly 2.5 million tonnes, down from a peak of over 11 million in 2013/14, and representing just below four months’ worth of domestic consumption. 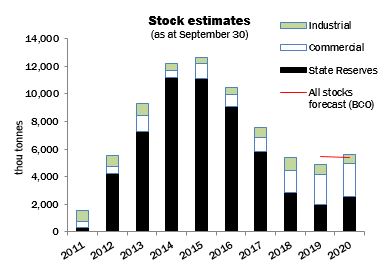 Changes to Cotlook’s estimates of global supply and demand during September resulted in a lower production figure for the 2020/21 season, of 24,531,000 tonnes (compared with 24,616,000 a month earlier), indicating a reduction of 4.7 percent from 2019/20. Northern Hemisphere crops are well advanced and becoming increasingly susceptible to weather conditions. Our figure for the United States was reduced to slightly below 3.67 million tonnes, which would be the smallest crop since the 2015/16 season, owing mainly to a succession of storms that appear likely to have impacted the crop across the Southeast. The United States Department for Agriculture will release its next, much anticipated forecast of local production on October 9.

Crop woes have also re-emerged in Pakistan, where pest infestations are high and recent heavy rainfall has taken a toll on fields in some of the major producing regions. Early seed cotton arrivals data support the notion that production in 2020/21 will be considerably lower than in 2019/20.
In India, conversely, output looks set to increase as farmers have been encouraged to plant cotton by the continuation of the Minimum Support Price scheme, as well as abundant monsoon rains throughout the growing season. A new area record has been set at slightly below 13 million hectares, while Cotlook envisages output in the region of 6.29 million tonnes.

Further forward, the scale of production in Brazil in 2020/21, and elsewhere in the Southern Hemisphere, will of course be affected by the behaviour of prices in the remainder of the year. Meanwhile the 2019/20 Brazilian crop, harvesting of which was completed in September, is envisaged by Cotlook to represent a new record, of over 2.9 million tonnes.

On the consumption front, our numbers continue to indicate only a partial recovery from last season, of almost seven percent, compared with a decline of over 13 percent in 2019/20. While retail sales and garment export data released in recent weeks have provided some cautious optimism that textile supply chains may have begun to recover, mills continue to operate well below pre-pandemic levels. The effect of the Covid-19 crisis across the value chain seems unlikely to abate for some time yet. Hence, Cotlook’s September figures indicate a greater increase in world ending stocks than one month earlier, of almost 1.1 million tonnes.