International cotton prices traded higher during September, mainly in response to a short-lived rally in New York futures, before relinquishing some ground to end only modestly firmer on balance. The Cotlook A Index began the month just above 70 US cents per lb, and rose to a high point of 73.7 cents per lb mid-month, its highest level since early August. The Index then staged a reversal before stabilising late in the period, to end at 71.80 US cents per lb. 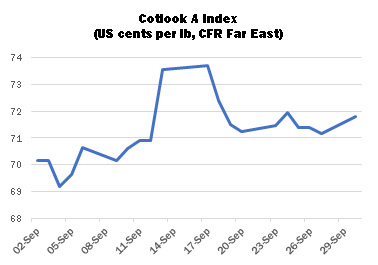 Mill demand generally remained limited during the month, in the absence of a clear price direction. Faced with poor downstream demand and a lack of confidence in the trading outlook, spinners concentrated predominantly on cotton for delivery in the fourth quarter, and directed demand towards cheaper lots, including US ‘recaps’ and Brazilian low grade lint. The major exception to the somewhat dull pattern of trading was Pakistan, where a sharp depreciation of the domestic production outlook resulted in a flurry of buying interest for imported growths during recent weeks.

The Sino/US trade dispute meanwhile continued to weigh on market sentiment, not least in China itself, where prices had fallen to new lows by the end of the month and thus diverged further from world values. , despite some tentatively positive inferences as regards the outlook for progress towards a resolution. Chinese and US trade representatives will meet again in Washington in October. Although a comprehensive trade deal does not yet seem in the offing, some goodwill concessions have been made of late, including purchases of US agricultural products (mainly pork and soybeans), and tariff exemptions on a raft of goods from both sides. On the cotton front, the relationship between Chinese and world prices provided spinners with little incentive to purchase imported cotton, whether or not tariffs on US lint were to be removed.

Demand in China was thus directed predominantly towards the substantial volume of cotton still available from the domestic 2018/19 crop or supplies available via the 2019 State Reserve auctions. This year’s series ended on September 30, having disposed of almost one million tonnes of lint acquired by the government between the 2011/12 and 2013/14 seasons. Cotlook’s calculations suggest that slightly under two million tonnes now remain in government warehouses, representing little more than three months’ worth of domestic consumption, some of which is likely to be unsuitable for spinning owing to age and reduced quality. Trade conjecture therefore now centres on State Reserve buying intentions.  Substantial government-sanctioned purchases in order to replenish State Reserve warehouses is one factor with the potential to elicit a shift in market sentiment. 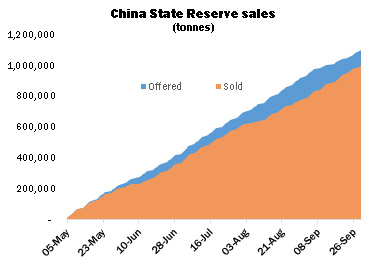 The scale of US export sales commitments registered during the first half of the month was somewhat routine, but became more robust as the period wore on, in part owing to the revival of active import demand from Pakistan, which was named as the major destination in two weekly reports. The cumulative volume committed by the week ended September 26 was over 9.2 million bales (480lbs). Cancellations for China featured only modestly, and the net result during September was still an addition to commitments for that market. However, many observers adhere to the view that large-scale cancellations may be forthcoming both as a result of the additional tariffs still in place and the scale of the market decline since mid-2018.

Changes to Cotlook’s estimates of global supply and demand during the month resulted in lower production and consumption figures for the 2019/20 season. On the production front, changes were made to the figures for a number of major growing countries, including the United States, Pakistan and India, bringing the global figure to 26,531,000 tonnes. In the US, Cotlook’s number was adjusted downward in line with USDA’s September estimate, owing principally to lower yield expectations. However, our revised number would still represent the third biggest crop on record, at 4.76 million tonnes. In Pakistan, unhelpful weather and persistent pest infestations during the growing season have prompted a significant lowering of expectations with regard to the eventual size of the crop; seed cotton arrivals by the end of the month were some one million bales (of 170 kgs) lower than at the same point in 2018. Conversely, in India, favourable monsoon rains and the safety net for growers provided by a high Minimum Support Price have seen planted area rise to a new record, at over 12.7 million hectares, according to the Department of Agriculture. Assuming a return to roughly average yields (which were particularly low last year), Cotlook’s figure has been raised by 80,000 tonnes, bringing the crop to over 6.2 million.

For consumption, reductions were made to the numbers for a range of markets, including those on the Indian subcontinent, the US and Indonesia. Spinners remain generally risk averse in the face of a sluggish downstream market and the broader atmosphere of macro-economic uncertainty has done little to allay fears. For the time being, Cotlook envisages growth of just one percent between the 2018/19 and 2019/20 seasons, placing consumption in the latter period at 25,615,000 tonnes. Taking the above adjustments into account, by the end of September a still considerable carryover remained in prospect at the end of the current season, of 916,000 tonnes.