International cotton prices moved considerably higher during October. The Cotlook A Index rose from its low point of 71.30 US cents per lb at the beginning of the month, to register its highest level since January, at 78.40, under the lead of New York futures. Prices reversed direction in the final days of October to settle at 76.7 cents per lb. 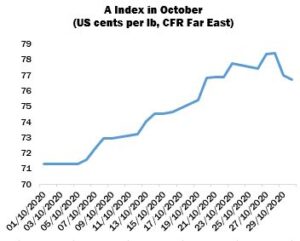 An active demand was witnessed during much of the month, from a broad range of consuming markets: spinners that had delayed purchases in the expectation that futures may retreat were obliged to revise their price ideas. Indian, Brazilian and West African growths tended to attract the most attention. Demand from Pakistan, in particular, was supported by the mounting evidence of a short domestic crop, more of which below.

Import demand also persisted from China. On the return from the early-October holiday, domestic cotton prices advanced strongly, moving significantly higher than international values, the increase of which was more measured.  The divergence of prices provided a strong incentive for mills to utilize their outstanding import quotas for 2020.

Brazilian styles were the focus earlier in the period but the emergence of logistical and shipping issues in that country shifted attention somewhat to origins that appeared more likely to reach Chinese ports ahead of the February deadline, including African Franc Zone and Indian cotton. Business in Brazilian continued in the bonded areas at ports however, where stocks (of all growths) have been depleted from their peak a few months ago.

The Cotton Corporation of India continued to successfully dispose of its supplies at steadily increasing prices, mainly to the trade. Late in the month, the volume remaining in the Corporation’s hands was estimated in the region of 4.5 million local weight bales (from a total government holding, including stocks controlled by the Maharashtra Cotton Federation, which at its peak earlier in the year had totalled about 13 million).

The general uplift in shippers’ prices, and an associated firming of basis levels or non-US origins, saw US cotton assume a more competitive position than had been seen for some time, and export sales reports published during October were generally robust, with Pakistan and China featuring heavily. By October 22, China accounted for 46 percent of US upland shipments so far this season and 34 percent of the outstanding sales commitment, much of which is expected to end up in State Reserve warehouses.

During October Beijing announced that this year’s State Reserve procurement programme will take place from December 1, 2020 through March 31, 2021, with a total procurement target of 500,000 tonnes. Quality parameters have been eased slightly from the 2019 procurement series. The auction will be suspended should the domestic price stand more than 800 yuan per tonne higher than the international reference price for three consecutive working days (the current discrepancy between local and international prices is considerably wider than this margin).

Cotlook’s October estimate of global production in 2020/21 was reduced by 144,000 tonnes, to 24,387,000 tonnes, the lowest since the 2016/17 season, and representing a decline of over five percent from the estimate for 2019/20. The outlook for production in the current season is moving into clearer focus as picking expands across the Northern Hemisphere, although the usual caveats persist regarding any major weather events.

The biggest change made during the period was for Pakistan, where reports continue to indicate a sharp decline in output even from last year’s disappointing results. Unhelpful weather and pest attacks have blighted the crop and yields are thought to have suffered considerably. Cotlook’s assessment at the end of October placed output at 1.125 million tonnes, representing the smallest crop in decades. Consensus is forming that the successively lower production figures may be the result of a structural deficit, in part related to seed varieties, rather than any specific seasonal issue.

Our figure for production in the United States was unchanged on the month, at slightly below 3.67 million tonnes, in anticipation of a clearer assessment of the damage caused by successive storms during the current very active hurricane season. The US Department of Agriculture’s October assessment of domestic output was reduced only marginally, to the surprise of many observers.

In China, ginning is in full swing, however a fresh outbreak of Covid-19 in Kashgar (which contributes about 20 percent to the important Xinjiang region’s output) briefly threatened to disrupt the transportation of cotton to mainland warehouses. Optimism with regard to yields is maintained, although quality in northern areas is thought to have declined from last season.

In the Southern Hemisphere, the final official estimate of Brazilian output in 2019/20 confirmed the country as the world’s fourth largest cotton producer, with a crop of just over three million tonnes. The scale of production in 2020/21, although a considerable distance away, is not at this stage expected to match that volume. 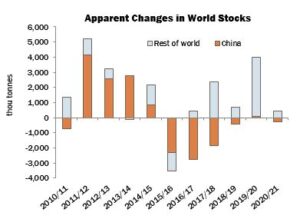 On the consumption front, various factors in October suggested that a recovery of global cotton use was gaining traction. Cotlook’s estimate was therefore raised by 600,000 tonnes, to over 24 million tonnes, representing an increase of 10 percent on 2019/20. The increase was almost entirely in China, informed by strong retail sales and export data that reflect a recovery in the country’s economy. Smaller adjustments were made for India and Pakistan. However, the very recent resurgence of Covid-19 in major consuming markets has dampened optimism and these figures remain tentative as the situation develops. The above changes indicated a rise in world stocks of a relatively modest 353,000 tonnes by the end of the season, compared with the increase of almost 1.1 million tonnes implied by our estimates a month earlier.

On October 28 and 29, the International Cotton Association (ICA) held its first virtual conference – Vision 2020 – in the place of its annual trade event, originally due to take place in Singapore. Online interactive resources will be further developed in 2021. However, it was emphasised that there is no substitute for meeting face to face and physical events will be resumed as soon as is practicable. The ICA 2021 Trade Event is scheduled for October 28 and 29 in Singapore.