International cotton prices traded higher in October, supported by a rally in New York. The Cotlook A Index started the period at 71.70 US cents per lb, before moving sharply higher mid-month following news of a partial accord between China and the United States. Market sentiment continued on a more positive note than has been seen for some time, with prices reflecting the cautious optimism: the 2019/20 A Index reached a high-point of 76.45 US cents per lb on the last day of the month, its highest level so far this season. 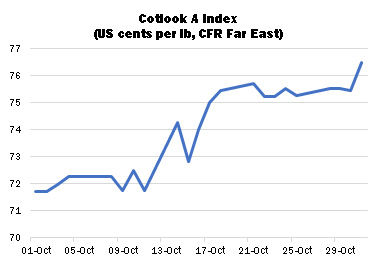 The upturn in prices mid-month was prompted by positive signals from both sides of the Sino-US trade dispute, as trade representatives spoke of a tentative ‘phase one’ agreement, which it was hoped would be signed by both presidents at the approaching APEC summit in Chile during November. In the event, the summit was cancelled owing to local unrest, but bilateral talks via the telephone were planned for early November, and alternative locations for a face-to-face meeting were apparently under discussion.

The possibility of increased Chinese purchases of US agricultural products has for some time been mooted as part of the trade negotiations, leading to conjecture as to the possibility that the State Reserve might be a major buyer of US cotton, in the event that the talks made progress. However, in the absence of any agreement so far, during October Brazilian became the major target of increased import demand.  According to trade reports, at least 200,000 tonnes were purchased by or on behalf of the State Reserve during the month. Government stocks have been reduced progressively over recent years. By Cotlook’s estimate, slightly under two million tonnes of lint were in government warehouses by the end of the 2019 auction series.

The rally in prices also saw a moderate improvement in mill demand albeit generally restricted to the covering of nearby requirements. Persistent import demand was evident from Pakistan, as the domestic production outlook deteriorated further (more of which below). Pakistan spinners were focused mainly on low grade lots, on price considerations. Spinners in Bangladesh continued to enquire mainly for cotton available nearby, from a range of markets. Turkish mills were also faced with crop issues, and turned more enthusiastically to imports.

US export sales registrations during the month were of routine proportions. The cumulative volume committed by the week ended October 24 was approaching ten million statistical bales (480lbs), representing about 60 percent of USDA’s estimate for the season of 16.5 million. Shipments by the same date accounted for 19 percent of USDA’s total.

At the end of October, Cotlook’s latest estimate of global production was little altered on the month, at 26,496,000 tonnes (against 26,531,000 in September). However, changes were made for a number of countries, the most significant of which concerned Pakistan. Seed cotton arrivals are lagging well behind the pace of last season and local observers continue to lament the impact of weather and pest-related issues that persisted throughout the growing season. Our figure has been reduced by a further 200,000 tonnes, to 1,480,000, representing the lowest production in over 20 years.

In India, conversely, observers appear fairly optimistic regarding output. Yields are expected to recover somewhat from the very low levels seen last year, while a record planted area of almost 12.8 million hectares, and widespread monsoon rains throughout the growing season have seen estimates revised upwards. Cotlook’s figure has been raised to 6,290,000 tonnes.

Smaller adjustments were also made to the figures for the US, where a reduction was made to bring our estimate in line with the Department of Agriculture (although the crop would still represent one of the largest on record), and Turkey, where low yields have impacted expectations. As for China, local assessments have tended lower of late, owing to an expectation of reduced output in the major Xinjiang growing region. A clearer picture should emerge as ginning expands in the coming weeks. 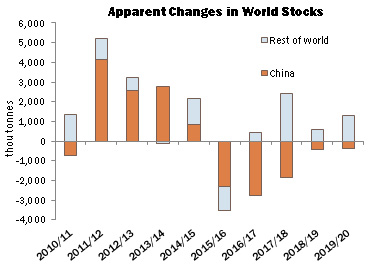 On the consumption front, no changes have been made to Cotlook’s estimates during the past month; our figure stands at 25,615,000 tonnes, representing an increase of just one percent on the 2018/19 season. Taking the above numbers into account, by the end of October a still considerable carryover remained in prospect at the end of the current season, of 881,000 tonnes. Cotton fundamentals thus remain in a fairly bearish configuration, as the market awaits developments on the Sino-US trade front.