The strong upward movement of international cotton prices observed during October tended to lose some of its momentum during November. Towards the end of the month, the Cotlook A Index nonetheless briefly crossed the threshold of 80.00 cents per lb for the first time since late January. The world market thus consolidated its return to pre-pandemic price levels, an outcome that few would have predicted this soon after the market’s low point was reached at the beginning of April. 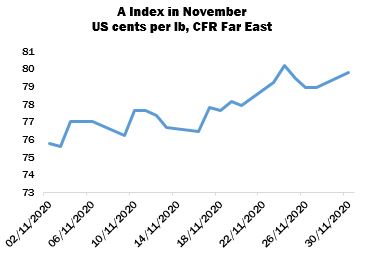 Trading activity presented a markedly less active appearance than during the previous month, when mill demand from China and Pakistan allowed for the disposal of trade holdings from various origins and assisted a further recovery of the basis levels achieved for various non-US cottons.
During November, the market was influenced in different ways by Covid-related factors. Cotton futures shared in the positive reaction of financial markets to developments on the vaccine front. However, the spread of cases in the United States and the public health measures introduced across much of Europe in response to the continued prevalence of the virus dictated a cautious mood on the part of many downstream textile manufacturers. Their apprehension affected yarn demand and selling prices, and in turn instilled caution in mill buyers of raw cotton.

Pakistan continued to purchase from the international market, albeit in more selective fashion than during the previous month, when the extent of the shortfall in domestic production was first emerging. Seed cotton arrivals data by mid-November confirmed the scale of the crop failure: cumulative arrivals were 41 percent below the previous season. Many farmers abandoned their low-yielding cotton crops in favour of winter wheat. Import demand, although slower in November, is forecast to continue over the coming months. It is estimated that spinners have secured at most 50 percent of their import requirements for the season.

The lull in import demand from China may also prove temporary. By the end of November, the scope for purchasing against 2020 import quotas was very narrow, either because the quotas in question had been exhausted or owing to the logistical challenge of meeting the associated shipment deadlines. On price considerations, however, the advantage of foreign cottons was still substantial. If that remains the case, a resumption of import activity is anticipated once mills have quota allocations in hand early in the new year. 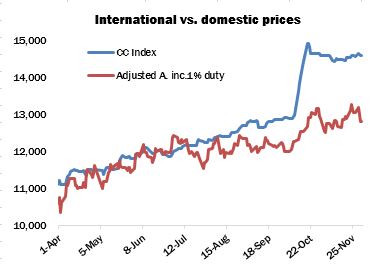 By late November, US export registrations were equal to well over 70 percent of USDA’s forecast for the season (14.6 million bales of 480 lbs). The expectation was therefore that Washington’s December supply and demand report might see an upward adjustment in the export projection, and perhaps also a reduction in the domestic crop forecast. Such a revision has been anticipated for some time in response to the succession of adverse weather events that have occurred across the cotton belt over recent weeks. These have included a number of hurricanes or tropical storms in the Southeast and Memphis Territory and an unseasonal spell of wintry conditions in West Texas. Yet to the surprise of most observers, the Department’s estimate has remained above 17 million statistical bales, and in fact was increased slightly in its November supply and demand estimates.
Pakistan apart, few adjustments were made to Cotton Outlook’s production estimates in November. In China, the harvest is effectively complete and by the end of the month over 70 percent of output had been ginned in Xinjiang. Yields in the region have been favourable this year, though a shortfall in quality has been identified.

In India, seed cotton arrivals have been exceptionally heavy during the early weeks of the season. The alacrity with which farmers have brought their supplies to market is attributed to firm prices (influenced by the Minimum Support Price regime) and the fear that a resurgence of Covid might at some point cause market yards to close once again. Heavy rain has caused some damage to cotton in some southern producing states; it remains to be seen whether the losses will be offset by the record planted area this year and good yields elsewhere. 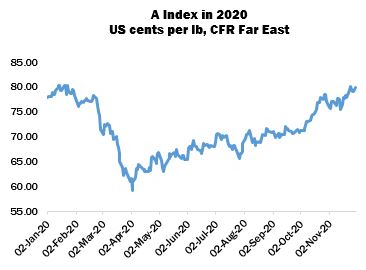 Cotton Outlook’s forecast of world production stood at 24,241,000 tonnes at the end of the month, and global consumption at 23,184,000 tonnes. The margin by which stocks are forecast to rise in 2020/21 has therefore been reduced to very modest proportions, whereas a surplus in excess of a million tonnes was indicated only a few weeks earlier. That convergence, coupled with a much-improved demand environment has contributed to a more positive price sentiment than many had dared hope for earlier in the year.