International cotton prices traded within a fairly narrow range during November, influenced by the sideways nature of the movements in New York. The Cotlook A Index started the month at 75.25 US cents per lb, before rising to a high point of 75.95 cents on November 11, its highest level since October 31. Prices subsequently dipped to register a low of 73.25, owing in part to a renewed pessimism with regard to the progress of Sino-US trade negotiations. 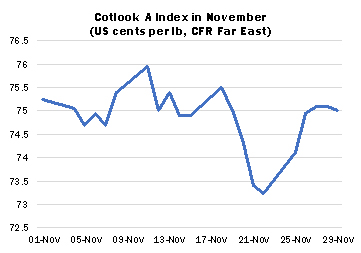 The likelihood of an early conclusion of a ‘phase one’ trade agreement between the US and China remained at the forefront of trade concerns, and the tenor of reports from each country was rather mixed during November. Should the two sides fail to reach a ‘phase one’ agreement, a fresh round of tariff increases is scheduled to apply from mid-December.

The perceived lack of progress in the negotiations continued to weigh on market sentiment in the Far East, and mill demand from that part of the world was rather subdued during the period. Mills in Turkey and Bangladesh, conversely, displayed a fairly good appetite for imported lots, mainly for cotton available for delivery nearby. Spinners in the former country, where output has failed to meet expectations, turned more enthusiastically toward Greek cotton during November. Indian lint was also a major feature of import demand during the month, particularly from Bangladesh, on price considerations, as that origin began to present a much more competitive appearance vis-à-vis other export growths. Meanwhile, as a result of the well-documented production issues in Pakistan (more of which below), demand from that country for cotton available nearby remained robust, particularly for US and Brazilian ‘recaps’.

Reports of US export sales registrations during November showed considerable improvement and posted a marketing-year high early in the month. The cumulative volume committed by the week ended November 28 was just over 11 million statistical bales (480lbs), representing about 68 percent of USDA’s estimate for the season of 16.5 million. Shipments by the same date accounted for 20 percent of USDA’s total. Although some cancellations were registered for China during the month, they were more than offset by new commitments, and that destination now accounts for some 12 percent of the total estimate for the season. That said, a significant proportion of the outstanding sales reflect contracts carried over from the previous season and there are some concerns as to whether all will ultimately be performed.

Whether the month’s modest upturn in US commitments to China will give rise to a more substantial reestablishment of trade flows between the two countries will of course depend on the progress of Sino-US trade negotiations. However, for the time being Chinese consumers will pay close attention to the pattern of State Reserve procurement, which began on December 2 (and will continue through March 31, 2020). The reserve intends to procure roughly 500,000 tonnes of high-grade Xinjiang cotton during the programme. That move would both replenish state warehouses (which Cotlook estimates contained slightly under two million tonnes of lint by the end of the 2019 auction series, and now house several hundred thousand tonnes more, owing to purchases of Brazilian cotton), and provide a ready supply of high-quality lint for domestic spinners, should the auctions of recent years be repeated in 2020.

Changes to Cotlook’s estimates of global supply and demand during the month resulted in lower production figures for the 2019/20 season. The most significant adjustments were for the United States, Pakistan and Uzbekistan. In the US, Washington’s November estimate of domestic output was reduced by almost 900,000 480lb bales, to 21.8 million (slightly over 4.53 million tonnes). That figure was adopted by Cotlook and would represent the fifth largest US crop on record, down from the third largest in October’s estimate. The November reduction results primarily from a lowering of yield expectations for Texas, indicating the state’s lowest yield since the 2013/14 season.

A major reduction was also noted for Pakistan, where seed cotton arrivals have remained considerably behind the pace of last year. Our number now stands at 1,375,000 tonnes, almost 30 percent below the initial estimate put forward in February of this year. Smaller decreases were made to the figures for Australia, owing to the prolonged drought which seems likely to preclude most dryland planting this year, and Turkey.

The above reductions were partially offset by increases to Cotlook’s production figure in a number of countries, most notably Uzbekistan. Yield prospects in the country have improved to such an extent that a greater crop is expected from a modestly smaller planted area. A small rise was also noted for Brazilian output, to bring Cotlook’s figure in line with that of CONAB, the official forecasting agency. 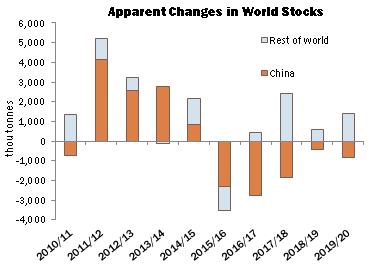 On the consumption front, no changes were made to our figures in November. The global estimate of 25.6 million tonnes does represent a slight increase from the previous season, but provides little in the way of optimism with regard to the outlook for improved mill consumption more generally.

Taking the above adjustments into account, Cotlook’s estimate of world production in the current season stands at 26,251,000 tonnes, some 245,000 lower than a month ago, but nevertheless representing a season-on-season increase of just over three percent. By the end of October a still considerable carryover remained in prospect at the end of the current season, of 636,000 tonnes.