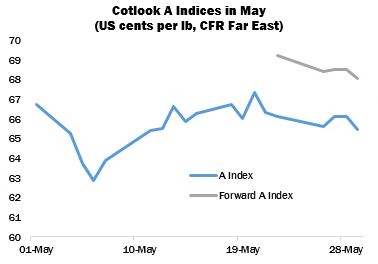 International cotton prices, as measured by the Cotlook A Index, fluctuated within a range of around 450 cent points during May. The nearby A Index fell to a low point of 62.90 US cents per lb early in the period, amid the deterioration of diplomatic relations between Washington and Beijing which prompted fears that the gains achieved under the Phase One trade deal may be in jeopardy. The Index subsequently advanced under the lead of New York, to register a high point for the month of 67.35 cents per lb, before easing modestly to end the period 130 cent points below its opening level.

May 22 saw the introduction of the Forward (2020/21) Cotlook A Index, several weeks later than last year. That price reflects cotton for shipment no earlier than October/November. The initial value, at 69.25 US cents per lb, represented a premium of 310 cent points in relation to the Current Index on that date, but was a full 16.4 cents lower than the initial 2019/20 Index value established in April last year. The differential narrowed somewhat in the intervening days; by the end of the period, the discrepancy between the indices stood at 260 cent points. For comparison, the inverted July/December ‘spread’ in New York was just 11 points.

The economic effects of measures to contain the spread of Covid-19 continued to reverberate through the cotton supply chain in the month and merchants remained focused predominantly on management of their existing purchase contracts, including requests from spinners to delay shipments. However, more mills began to restart their operations in the second half of the month and industry members in some quarters began to express tentative hopes that a gradual revival of demand might be witnessed. Of the modest business that was concluded during May, with the exception of Chinese purchases of US cotton (more of which below), cheaper lots were the focus. Asking prices for Indian represented a very competitive option vis-à-vis competing growths. The basis for Brazilian came under pressure as the price at which 2019 crop balances were sold from origin reflected the collapse of the local currency, while offers of 2020 crop also came under pressure on supply and demand considerations.

China remained the major source of import demand during May, predominantly for US lint, and was again the main destination named in USDA’s export sales reports released in the month, for both this season and next. By the week ended May 21, the cumulative volume of both upland and Pima committed for export to China in the current season was 3,268,600 running bales (46 percent of which had been shipped), representing 20 percent of all US export sales in the season so far. The pace of US export shipments (to all markets) during May remained more robust than some had predicted, given the market disruption of recent months, but still below that required to meet USDA’s projection of exports for the season, of 15 million bales of 480 lbs.

Although those Chinese purchases were credited largely to a state-owned trading entity, the scale of the purchases fuelled conjecture among the international trade that the State Reserve might be the eventual destination for said cotton: as we mentioned in our last report, the depression of world prices over recent months would provide an opportunity to replenish and rebalance, quality-wise, the ageing stocks in State Reserve warehouses at relatively attractive prices. Late in the month, private mills also began to show interest in imported cotton. Cotlook’s estimate of raw cotton consumption in the current season was reduced by a further 268,000 tonnes in May, to 22,220,000 tonnes, representing the lowest since the 2003/04 season. The change was largely attributable to adjustments for countries in the Indian subcontinent, where the sizeable spinning sectors have been badly affected by the loss of retail demand, and disruption of the entire cotton supply chain, resulting from public health measures to curtail the spread of the Covid-19 pandemic. Smaller but still considerable falls were also noted for the US and Brazil.

Our global production figure for 2019/20 also underwent a reduction in the May assessment, owing predominantly to a major adjustment for India, of 255,000 tonnes, to 6.035 million. Seed cotton arrivals from the 2019/20 crop are still not complete and the interruption of work caused by the nationwide lock-down has seen some farmers abandon unpicked fields. That fall was partially offset by a modest increase to our assessment of output in the US. World production is estimated at 25,815,000 tonnes, indicating an increase in stocks by the end of the season of almost 3.6 million tonnes.

Cotlook’s figures for 2020/21, meanwhile, remain cautious and subject to change as the season progresses. However, with the start of the new season only two months away, there is little to encourage optimism with regard to a strong recovery of global consumption: the pandemic remains active in many countries around the world and consuming markets in Europe are only now beginning to tentatively emerge from strict lock-down conditions. Our figures include considerably lower figures for the Indian subcontinent and China, in acknowledgement that the far-reaching impact on consumer demand for textiles and clothing seems unlikely to abate for some time yet. Cotlook envisages demand in the region of 23,627,000 tonnes, a monthly reduction of 300,000 tonnes, implying growth of 6.3 percent compared with the current season. 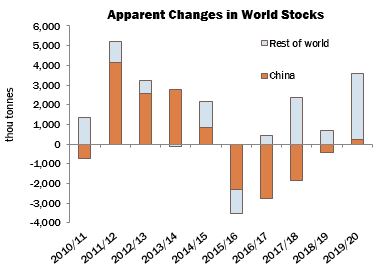 The production outlook is also lower in several countries, as the scale of planting is likely to be impacted by the fall of world prices in recent months, as well as the logistical implications for agriculture around the globe. A reduction of 203,000 tonnes has been made compared with the figure put forward a month ago, to 24,792,000. However, global stocks by the end of the 2020/21 season are expected to rise further, by 1.165 million tonnes, suggesting that global oversupply will weigh on world prices for some time to come.