International cotton prices declined considerably during the first half of May, owing to consecutive lower settlements in New York. By mid-month, the ICE July contract had lost almost 12 percent of its value. Meanwhile, the trading range of the 2018/19 Cotlook A Index was over ten cents; the Index started the period slightly above 86 US cents per lb, and fell to 76 cents on May 14, the lowest level since its inception in March 2018. 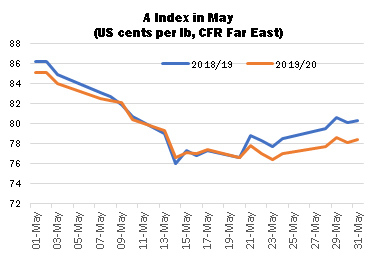 The differential between the 2018/19 and 2019/20 Indices also shifted during the period, but ended little changed on balance; a short-lived reversal of the current season’s price premium over the 2019/20 Index became evident when prices fell to their lowest point, but the earlier relationship was soon re-established and the Forward Index ended the month with a modestly wider discount than when it started the period, at 1.95 US cents per lb. The modest upward reversal of prices is thought to have been prompted by a relatively good US weekly export sales report late in the month, as well as the relative dearth of nearby offers of sought-after origins such as Brazilian and African Franc Zone.

The precipitous decline of prices earlier in the month was prompted by a massive sell-off in New York, the catalyst for which was the widely publicised deterioration of trade relations between China and the US. A ‘truce’ which had been in place since December collapsed early in the period, and additional import tariffs were applied by the US and further measures were promised by both sides in the dispute.

Mill purchasing was unsurprisingly much more active during the decline of asking rates, on a broad range of markets. Persistent import demand continued to emanate from India, prompted by expectations of a smaller crop than was earlier anticipated and the associated exceptionally high prices at origin, which accentuated the competitiveness of imported cotton vis-à-vis domestic lots. In other consuming markets, the active purchasing soon gave way to a more circumspect approach as prices recovered ground; as most of those mills with very pressing requirements covered their immediate needs when asking rates had declined, buyers generally elected to remain on the sidelines and await price developments before re-entering the market.

US export sales reported in May were robust and included the largest weekly net addition to the current season’s upland sales commitment so far in the marketing year during the month. The volume committed for export in the current season by the week ended May 23 stood at over 16.1 million 480 lb bales, well in excess of USDA’s recently reduced export projection of 14.75 million. Shipments have improved somewhat and the lower export number now seems achievable in the remainder of the season. 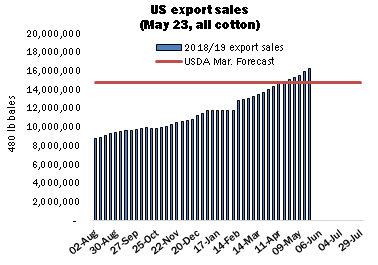 Commitments to China for shipment during the current marketing year have remained well below those of recent seasons. Those of upland by late May were 32 percent lower than a year earlier, whereas Pima sales showed an increase of nearly 10 percent. The worsening trade relations have placed fresh doubt on the fate of some forward sales commitments to China, which late in the month accounted for about 39 percent of registrations for shipment during the 2019/20 season.

China’s 2019 State Reserve auction series, launched on May 5, attracted a good level of participation in the early stages of the sales. Around 91 percent of the lots on offer had found buyers in the first four weeks, compared with just 58 percent by the same point in last year’s auctions. The availability of cotton from the reserve, added to the volume of cotton which resides in commercial and industrial hands, would imply that China’s supply remains ample for the foreseeable future.

Cotlook’s estimate of world production in 2019/20 was increased by over 300,000 tonnes in May and, at 27.36 million tonnes, would represent the second highest output on record. The rise was mainly attributable to the United States; our figure is now in excess of five million tonnes (equivalent to 23.13 million 480 lb bales), owing mainly to timely rain in major producing region West Texas and a resultant expectation of lower abandonment.

USDA’s first detailed analysis of domestic and world supply and demand for the 2019/20 season was released in early May. The domestic production forecast was formulated before the receipt of the helpful moisture in Texas, and stands some way behind Cotlook’s number, at 22 million bales.

Elsewhere, the biggest adjustments to Cotlook’s numbers as regards output were for India and Argentina. In the former origin, our figure has been lowered to 5.61 million tonnes, owing mainly to testimony from local observers, implying the lowest average yield since 2003/04, influenced by erratic distribution of 2018 Southwest Monsoon rainfall, among other factors. In the latter producer, the harvest has been hindered by bouts of unhelpful rainfall at a crucial juncture and both yield and quality appear at risk. Our forecast of the 2018/19 crop has been reduced by 40,000 tonnes.

The only notable change to Cotlook’s estimates of 2019/20 consumption during the month was for Uzbekistan, where government policy continues to encourage domestic consumption of the cotton crop. An increase of 60,000 tonnes was made to the figure for that country. Global consumption is now placed at 26.69 million tonnes, the highest on record, representing an increase of 3.4 percent on the previous season. Nevertheless, taking into account the above adjustments, at this early stage the forecasts imply that world stock levels at the end of 2019/20 will have increased by over 660,000 tonnes.  For the time being, therefore, the outlook for global cotton fundamentals continues to offer little to imply a bullish price run in the coming months. 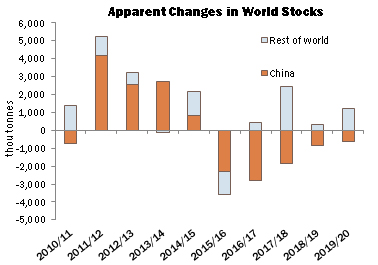