International cotton prices collapsed during March, under the lead of a rapidly declining New York futures market. The A Index fell by some 9.50 cents per lb during the period, to end the month at 60.90 cents, its lowest level for many seasons (and 13 cents below its nominal 30-year average). The Index has declined by almost 28 percent since the start of the calendar year. The pronounced fall in recent weeks was prompted by a slowdown of economic activity caused by the Covid-19 pandemic and the various measures taken to control its further spread. 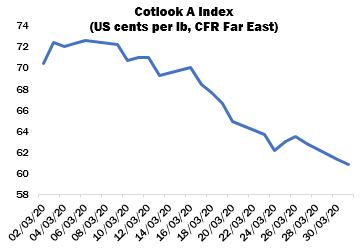 A very small respite was provided from the almost constant decline of international prices mid-month, as governments in both the industrialised and developing world approved a range of financial relief packages, the scale of which is unprecedented. Futures and equity markets experienced a brief upturn but soon reversed direction to resume their downward trajectory.

As the month progressed, commercial and industrial activity in many parts of the world was brought to a virtual standstill and retail demand for clothing and textiles contracted dramatically. As a result, garment exporters were faced with a wave of cancellations from major retailers and brands in Europe, North America and elsewhere. The effects were quickly felt in the upstream sectors of cotton textile supply chain. Demand for cotton yarn slowed sharply and spinners in turn requested that their raw cotton shipments against existing contracts be delayed.

Market sentiment understandably turned extremely cautious and international raw cotton merchants tended to focus on execution of their existing contracts, rather than chasing new business. The spectre of contractual defaults has once again loomed.

China’s State Reserve procurement programme came to an end on March 31. The Reserve acquired around 370,000 tonnes of Xinjiang 2019/20 high grade cotton from domestic sellers during the preceding four months (just over half of the maximum envisaged by the State Reserve). The exact volume of cotton now in state warehouses is difficult to glean, but given Cotlook’s estimate that the level was above two million tonnes at the turn of the year, with yet more imports of Brazilian lint in transit at that time, it seems reasonable to assert that the amount in state hands is now in the region of 2.5 million tonnes, representing over 30 percent of our reduced estimate of Chinese consumption in the current season.

Official customs data show that during the first two months of 2020, China’s imports of raw cotton were slightly above 410,000 tonnes, down from over 500,000 during the same period last year, with over half of the quantity contributed by Brazil. The cumulative amount imported in the season so far is around 27 percent behind the same point in 2018/19.

US export sales registrations continued their robust performance in the first half of March, registering several further marketing-year highs for upland lint.  New sales to China were revealed, but also some cancellations of existing contracts. The total volume of both upland and Pima committed for export (to all destinations) by late March amounted to 94 percent of USDA’s projection for the season (16.5 million 480lb bales). Of that volume, 57 percent had been shipped.

In response to the rapid pace at which events unfolded during March, Cotlook’s estimates of consumption at the end of the month were subject to some dramatic revision. The global estimate for the 2019/20 season was reduced by over two million tonnes, an adjustment that may yet prove to have understated the true extent of the demand destruction attributable to the Covid-19 pandemic and its economic repercussions.

World consumption in 2020/21 is currently forecast at 24,117,000 tonnes, representing a reduction of almost 1.8 million tonnes from a month earlier and implying only a modest recovery from the much-reduced figure for the current season.

The collapse of prices has arrived too late to affect the supply side of the market during the current season. In the Northern Hemisphere, crops are now for the most part harvested and those in the Southern Hemisphere already in the ground or in the process of being picked.

Some uncertainty, however, surrounds the outlook for the area devoted to cotton in 2020/21. Cotlook’s global production figure has been lowered by over 800,000 tonnes from our initial forecast in late February, to 25,280,000 tonnes, which if realised would be the lowest since the 2016/17 season.

The single largest adjustment was for the United States, where the fall in December futures is likely to impact the scale of plantings.

In India, by contrast, the Minimum Support Price is likely to afford growers a price safety net and hence area is expected to remain above 12 million hectares, although a shift from cotton to food crops cannot be ruled out. A reduction in output of around five percent from this season is envisaged. The strength and distribution of moisture from the Southwest Monsoon will as always be crucial for the majority rain-fed crop. 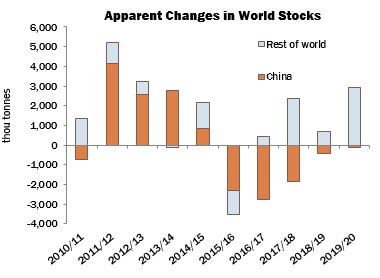 In the Southern Hemisphere, growers in Australia have received relatively good rainfall so far this year. The expectation is that a partial recovery will be staged from the very poor crop in 2019/20. The depression of world prices has been offset to some extent by the depreciation of the Australian dollar against the US unit. Brazil, however, is likely to reduce plantings quite considerably, marking the end of a period of strong expansion.

A full breakdown of all Cotlook’s latest adjustments to production and consumption can be seen in the accompanying table. 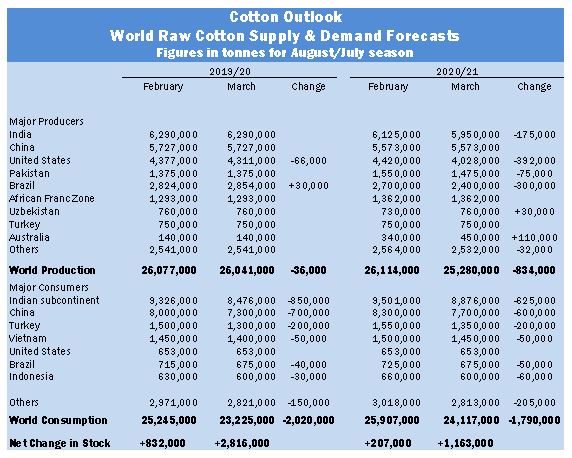