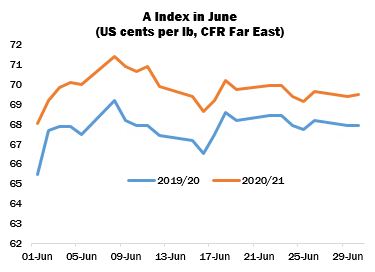 International cotton prices, as measured by the Cotlook A Index, again fluctuated within a fairly narrow range during June, and gained modest ground under the lead of New York futures. The current (2019/20) A Index started at its low point for the month, before reaching a high point on June 8 of 69.20 US cents per lb. The price ended 125 cent points below that level. The Forward (2020/21) Index, representing cotton for shipment no earlier than October/November, followed a similar pattern. That Index registered its firmest price since it was introduced in May, at 71.40 cents per lb, but ended the month 200 cent points lower. The Indices converged as the month progressed, from a differential of 2.60 US cents per lb at the beginning of the period, to just 1.45 by June 30.

The relative stability of New York futures remained somewhat at odds with both the outlook for the global balance sheet (more of which below) and the bearish mood evident in the wider international market. Some spinning mills and textile and garment factories gradually began to restart their operations in late May and that trend tended to continue in the following month, but the near paralysis of the cotton textile supply chain persisted and there was little to engender any optimism that the sector may stage a recovery in the near term.

Of the business that was conducted in June, cheaper Brazilian lots remained a focus for hand-to-mouth buying on the part of mills in various markets. Demand for Indian continued to be limited despite very competitive asking prices. In the case of US export sales reports, China was again the major destination mentioned. Sales to China were the principal feature of successive US export reports during June, which also demonstrated the paucity of mill demand from other countries, with the major exception of Vietnam. In the second half of the month the pace of shipments picked up to exceed the weekly average required to meet USDA’s projection for the season (15 million bales of 480 lbs). Total US sales registered for the 2019/20 campaign are approaching 18 million bales: despite Washington’s anticipation of a substantial carryover into the new season, the availability of US cotton for third quarter shipment now appears somewhat limited.

On the last day of the month, it was confirmed that a Chinese State Reserve sales auction series would commence on July 1, and continue through until the end of September. The daily volume offered for sale will be around 8,000 tonnes (versus 10,000 in 2019), up to a cumulative total of around 500,000 tonnes, with the aim of optimising the structure and quality composition of the reserves. Perhaps 1.75 million tonnes of the reserve stocks consist of domestic cotton, procured as far back as the 2011/12 season. Around 370,000 tonnes of Xinjiang high grades were also added between December 2019 and March of this year, and a further 400,000/450,000 tonnes of imports, mainly Brazilian, entered the reserve in 2018 and 2019. Added to recent imports of US cotton and the volume of lint which resides in commercial and industrial hands, China’s supply appears ample for the time being. 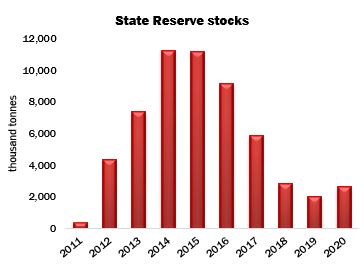 Following some swingeing cuts in earlier months, Cotlook’s estimate of raw cotton consumption in the current season was reduced by a further 159,000 tonnes in June, to 22,061,000 tonnes, representing the lowest volume since the 2003/04 season. The change to our figure was mainly attributable to a considerable adjustment for India, where the effects of measures to stem the spread of Covid-19 have continued to affect the entire supply chain, including the important spinning sector, and the resulting impact on retail demand has persisted. Smaller reductions were also made to the figures for the US and Uzbekistan.

Our global production figure for 2019/20 was barely changed in June, as little would seem likely to affect output in the current campaign at this stage. An increase in stocks is indicated by the end of the season of almost 3.76 million tonnes. 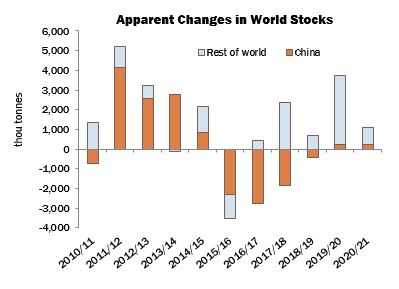 For 2020/21, Cotlook’s global production figure was reduced by 205,000 tonnes, to 24,587,000, a fall of almost five percent on 2019/20, and the lowest since 2016/17. Planting advanced across the Northern Hemisphere during June, but reliable data from some of the major producing countries was lacking. In the US, however Washington’s Planted Acreage report, released on June 30, will provide a firmer basis on which to assess the size of US output. USDA places the area sown to the 2020/21 cotton crop at 12.2 million acres (4.93 million hectares), a fall of eleven percent from last season and a figure below most expectations. In contrast, early planting data in India show a considerable gain on the same juncture last year, owing to abundant Monsoon rains over cotton fields, and a Minimum Support Price scheme that should sustain farmers’ enthusiasm for cotton. In Pakistan, however, although area is expected to fall only modestly, poor germination looks set to negatively impact yields.

Our assessment of the outlook for consumption in 2020/21, meanwhile, remains cautious. At this stage there is little to encourage optimism with regard to a strong recovery of global cotton use: some retail sales data for May provided grounds for tentative optimism that the textile sector may have begun a gradual revival, but economic forecasts are fairly bleak and consumer confidence is likely to remain weak for some time yet. The only major change to our figures in June concerns a fall for the United States, bringing our forecast of global demand to 23,589,000 tonnes. That implies a rise of 6.7 percent on the previous season, representing little more than half of the loss suffered during the 2019/20 campaign. An increase in world stocks is envisaged by the end of 2020/21 of 998,000 tonnes, versus 1,165,000 indicated a month earlier.