International cotton prices lost further ground during the early part of June. The Cotlook A Index started the period close to 80.00 cents per lb but by the middle of the month had declined into the mid-70s where it remained until the end of June. 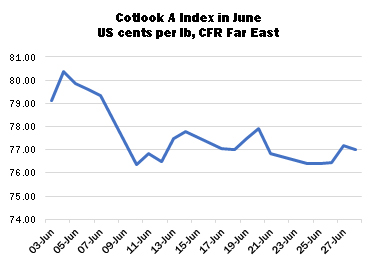 Throughout the month, the uncertain outlook for Sino-US trade relations remained the dominant influence on sentiment. In early May, it will be recalled, prices collapsed as it became clear that an agreement between the two sides was not, after all, within reach, confounding the impression that had influenced a gradual recovery of world cotton prices during the first four months of the year.

Foreign delegates attending the China International Cotton Conference in Qingdao toward the end of the month were struck by the evident toll the uncertainty of the preceding months has taken on business confidence, in textiles as in other sectors of the economy. Estimates of China’s raw cotton consumption during the 2018/19 season and forecasts for the campaign ahead were revised downward during the month.  The threat that punitive tariffs would be extended to cover virtually all previously unaffected Chinese goods imported by the United States – including most textile and apparel categories – remained a source of apprehension. At the end of the month, however, statements by Presidents Xi and Trump in the margins of the G20 summit in Osaka indicated their agreement to resume trade negotiations and to refrain for the time being from any new tariff measures.

Local prices had fallen sharply in May and continued on a downward trajectory during the early part of June. The China Cotton Index, which measures spot values on a delivered mill basis, reached a low point just above 14,000 yuan per tonne around the middle of the month. Domestic prices had thus fallen well below the level at which ginners could expect to ‘break even’, given that seed cotton had been purchased earlier at prices that reflected a much stronger market. 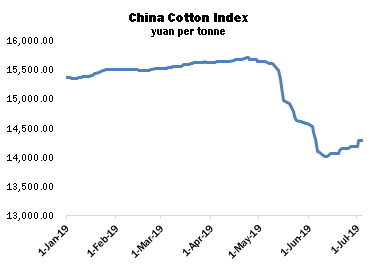 In the circumstances, despite the release of additional import quota in June, import demand from China remained subdued, the more so as local spinners had various alternative sources of supply to meet their needs. Domestic ‘commercial’ raw cotton stocks (excluding mills stocks and supplies held in the State Reserve) remain historically high: those at the beginning of June were estimated at 3.53 million tonnes, almost 975,000 above the volume recorded a year earlier.  Daily State Reserve auctions were another option. Auction turnover dipped during the early part of June, before regaining momentum during the second half of the month. Aggregate sales amounted to 151,000 tonnes during June, raising the total since the start of the series in early May to nearly 356,000 tonnes. According to the principle of ‘rotation’ declared by the authorities, sales from the State Reserve will at some point be replaced with supplies purchased from the international or domestic market. 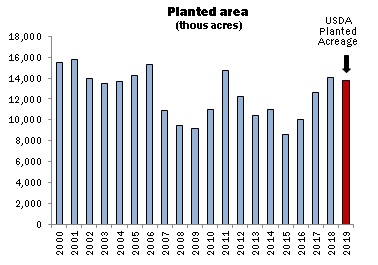 In addition to the enduring uncertainty arising from the dispute between Washington and Beijing, the supply and demand outlook for the 2019/20 season exerted a growing influence on the prospects for world prices. The major question during the period concerned production in the United States.  Protracted rainfall across many parts of the cotton belt delayed (or in some areas prevented) planting of cotton, but overall was considered to have enhanced yield potential. Forecasts of area and abandonment in Texas, key determinants of the US crop size, fluctuated substantially during the month.  On June 28, the Department of Agriculture released its annual Planted Acreage report, which placed the area sown to the 2019/20 crop at 13.72 million acres. The figure was modestly below the 13.78 million indicated by the March Planting Intentions report but would still be the third-largest area of the past ten seasons.

USDA maintained a production forecast of 22 million bales (480 lbs) in its June supply and demand estimates and an export projection of 17 million bales (a figure that some observers consider optimistic without an early resolution of trade issues with China and the removal of the additional tariffs on US cotton introduced by Beijing in July 2018).  Even on USDA’s assumptions, US ending stocks would rise by the end of the 2019/20 season to their highest level since 2007/08. 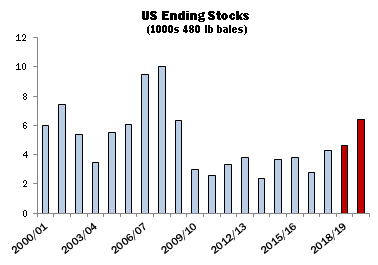 Elsewhere, the Brazilian harvest commenced in June, amid continued confidence that the lint outturn will mark a quantum leap in production from the two million tonnes recorded the previous season to 2.7 million or more. The logistical challenges associated with the strong rise in output remain well to the fore.

In India, the arrival of the Southwest monsoon was somewhat delayed but became more vigorous as the month progressed, allowing planting of cotton to gain momentum in the main producing states. Most observers still believe that the area sown will be on a par with that of last season but that a recovery of yields (which slumped to their lowest for 15 years in 2018/19 according to the Cotton Advisory Board) will bring about an increase in output.

In Pakistan, early-season optimism has to some extent faded, in part owing to doubts regarding farmers’ commitment to expensive pest control measures in the less supportive price environment that has prevailed over the past month or so.

During the course of the month, Cotton Outlook’s forecasts of both world production and consumption underwent substantial reductions that largely offset one another. Production was placed at nearly 26.9 million tonnes and consumption at 26.3 million, implying an addition to world stocks by the end of July 2020 of some 600,000 tonnes. However, uncertain prospects for yield in some major producing countries and the evident fragility of consumption suggest that significant further shifts in the dynamics of supply and demand may lie ahead.