The end of July marked the transition from one marketing year to the next, and with it the disappearance of the 2019/20 Cotlook A Index. For the first half of the 2019/20 season, the Index’s trajectory was steadily upward, in reflection of growing confidence that an agreement on trade issues would be reached between the United States and China. The high point for the season of 80.20 cents per lb was reached in mid-January, just as the Phase One trade agreement between Washington and Beijing was signed. However, prices subsequently underwent a precipitous decline as the implications of the Covid-19 pandemic became clear: the Index’s low point of 59.15 cents per lb was registered on April 2, 2020. The final value for 2019/20, registered on July 31, was 940 cent points above that nadir. The average for the season (August/July) was 71.33 cents per lb. 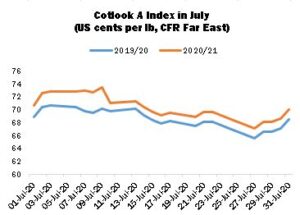 The 2020/21 Index (until August 1 referred to as the Forward Index), representing cotton for shipment no earlier than October, will stand alone until early in 2021, when a 2021/22 Forward Index will be established, as soon as sufficient market evidence is available.

Nearby upland prices as reflected in the A Index continued to move within a fairly narrow range in July, despite the persistence of a bearish market sentiment and pressure on merchants’ basis levels relative to New York. The Index reached a high point in the month of 70.70 US cents per lb and a low of 65.55 cents, but ended the period close to the middle of that range. 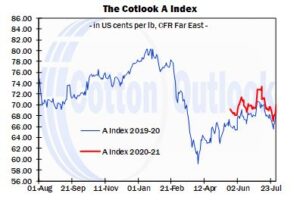 The summer doldrums were well to the fore in July, exacerbated by the unprecedented circumstances associated with the spread of Covid-19 that have cast doubt on the outlook for the global cotton yarn and textiles market in the season ahead. Spinners in several markets did cite a modest improvement overall in business conditions, with downstream orders increasing to an extent, but order books remain well below the levels that would be required to restore demand to its pre-pandemic state. Mill demand for raw cotton thus remained exceptionally slow and focused on supplies available for prompt or nearby shipment.

For spinners in China, a new source of supply appeared with the commencement of this year’s State Reserve auction series at the start of July. Demand was strong throughout the month and daily catalogues (for cotton produced between 2011/12 and 2013/14) continued to sell out, to total a volume approaching 200,000 tonnes. Should the pace of sales maintain their current momentum, a cumulative total of well over 500,000 tonnes will be achieved by the conclusion of this year’s auction series at the end of September. When set against the 371,000 tonnes of Xinjiang 2019/20 crop acquired by the reserve between December and March, a net reduction of State Reserve domestic cotton stocks may be in prospect in the region of 150,000 tonnes, though the Reserve has also been credited with import purchases in recent months, mainly directed to US cotton.

On the US export front, state-sponsored purchasing from China largely abated during the month, which brought into focus the relative paucity of demand from other markets. However, the volume of purchases carried over into 2020/21 looked set to total more than 3.4 million running bales (500 lbs), which when added to the purchases already made for shipment in the next marketing year means that nearby availability of US cotton remains rather tight.

The other noteworthy sales activity of the past month involved the disposal by the Cotton Corporation of India of around 700,000 local weight bales, mainly on the domestic market. The purchases were facilitated by attractive discounts under the Corporation’s bulk purchase scheme and favourable payment terms, and at last made some dent in CCI’s huge stocks, thought by late July to amount to some 11.3 million bales. The international trade’s continuing reluctance to acquire CCI stocks in volume, despite their attractiveness vis-à-vis competing growths in terms of price and quality, was seen as symptomatic of the depressed state of demand in the raw cotton market more generally.

The global balance sheet continues to offer little in the way of optimism with regard to the outlook for prices in the medium term. The addition to world stocks at the end of the 2019/20 season was still placed by Cotlook at a daunting 3.72 million tonnes in our July assessment, down from almost 3.76 a month earlier, largely owing to a considerable reduction to output in India.

For 2020/21, Cotlook’s global production figure was reduced by 190,000 tonnes, to 24,397,000, representing a year-on-year fall of around 5.3 percent. Washington’s Planted Acreage report, released on June 30, informed our decision to reduce US production by 237,000 tonnes, as well as excessive heat and dryness in the important West Texas growing region. Reductions were also made to some African Franc Zone countries, where sowing is expected to fall short of expectations. Conversely, a substantial increase was made to the figure for India, where abundant monsoon rainfall and a higher Minimum Support Price have spurred planting across much of the cotton belt. Nationwide, the figure by late July was already approaching the record final area attained last year. 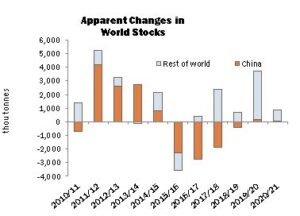 Our tentative estimate of world consumption in the new season was placed at 23,539,000 tonnes (a decrease of 50,000 on the month), reflecting only modest changes compared with the deep cuts made earlier in the year. A recovery is at this early stage envisaged of almost seven percent on consumption in 2019/20, when a sharp season-on-season decline of some 13 percent was indicated. Taking the above numbers into account, a further addition to world stocks by the end of 2020/21 is envisaged of around 858,000 tonnes.