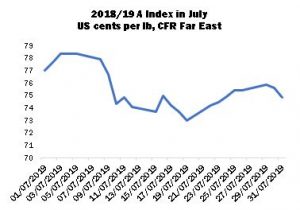 International cotton prices drifted lower during most of July before reversing direction late in the month to see asking rates regain some ground. The Cotlook A Index rose to 78.35 cents per lb early in the month, started the period modestly below its high-point of 77.65 US cents per lb, but by July 19 had fallen to 72.95 cents on July 19, the lowest level since its inception in March 2018. The end of the month saw the disappearance of the 2018/19 Cotlook A Index. The 2019/20 (formerly the Forward Index) will stand alone until the introduction of a 2020/21 value, as soon as practicable after the turn of the year. 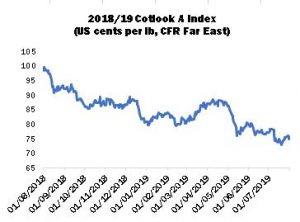 The dominant influence on market sentiment during July continued to be the protracted Sino-US trade dispute and its consequences, which included economic uncertainty and slowing raw cotton consumption in China and elsewhere. A perceived lack of progress in resolving the impasse placed pressure on international values throughout most of the month. However, prices rallied briefly late in the period, prompted by news reports that Chinese enterprises had applied for an exemption from costly import tariffs and showed demand for a number of US agricultural products, including cotton. A fresh round of trade talks took place in Shanghai during the last days of the month, between senior representatives from the two countries, the upshot of which was keenly anticipated in trade circles. However, in the event, little progress appeared to have been made.

The pattern of mill demand remained fairly limited and concentrated on lots available for nearby delivery throughout most of July. Remnants from the 2018/19 African Franc Zone crops attracted persistent demand in that regard, although that cotton had become difficult to source. Brazilian lots also found ready buyers on a range of markets.  Pockets of forward demand had begun to emerge by later in the month, but the uncertain direction of prices owing to the above-mentioned macro-economic factors, as well as the quite considerable volume of outstanding high-priced contracts that were agreed earlier in the season, tended to stifle spinners’ willingness to commit to further purchases.

Import demand from China, particularly, remained at a low ebb, as local values continued to present a more competitive appearance than imported lots. Turnover at the State Reserve auction series remained robust during June. Almost 261,000 tonnes were offered during the month, over 94 percent of which was taken up, bringing the cumulative total sold during the 2019 series by the end of July to over 600,000 tonnes. The volume remaining in commercial and industrial hands at the beginning of July was estimated at over four million tonnes, while the availability of cotton from the domestic 2019/20 crop is fast approaching. Hence, supply in China remains ample for the foreseeable future.

The customs authorities reported June’s raw cotton imports at 157,508 tonnes, raising the cumulative total for the first eleven months of the international statistical season to nearly 1.94 million tonnes. The total for the season should thus easily surpass Cotlook’s forecast of two million tonnes and will be the highest seasonal total recorded since the 2013/14 campaign.

By July 25, US 2018/19 export shipments were equivalent to about fourteen million statistical bales of 480 lbs, suggesting that the total will fall short of USDA’s projection for the season, reduced earlier in the month to 14.5 million. The 2019/20 season’s beginning stock will therefore rise commensurately.  At the same date, forward commitments for shipment during the season ahead stood at just over 5.1 million statistical bales, of which China accounted for nearly one third. Washington’s forecast for the season is seventeen million bales, a figure that may prove challenging unless a resolution of the dispute with China is achieved. 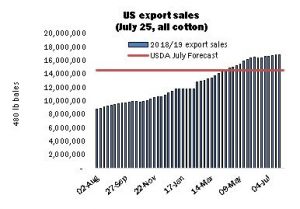 Sales to China for shipment during the current marketing year have fallen well below those of recent seasons. Those of upland by late July were over 37 percent lower than a year earlier, whereas Pima registrations showed an increase of around three percent.

Cotlook’s latest estimates of global supply and demand continue to imply a general slowdown in the outlook for consumption, with major changes for some of the biggest consuming markets. Our number for China has been reduced by no less than 240,000 tonnes during July, to 8.26 million tonnes, bringing that figure about in line with local forecasts. Reductions were also made to the figures for Vietnam and Bangladesh, owing to the well-documented trading difficulties in those markets during recent months. The global figure at the end of July wasplaced at 25,911,000 tonnes.

World production was also revised downwards, owing primarily to a considerable change for the United States. Persistent rainfall late into the planting season has cast doubt on the final area figure. However, the crop made up some ground during July, and expectations for yield appear to be rising. For the time being, Cotlook’s estimate, at 4.85 million tonnes, continues to imply the largest crop since production peaked at over five million tonnes in the mid-2000s. Other reductions were made to the numbers for the African Franc Zone, owing predominantly to unhelpful weather, and smaller adjustments for various other markets. Global production is now therefore placed at 26,597,000 tonnes in 2019/20, implying a considerable carryover at the end of the season, of some 686,000 tonnes. 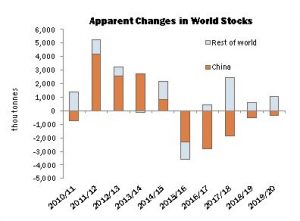