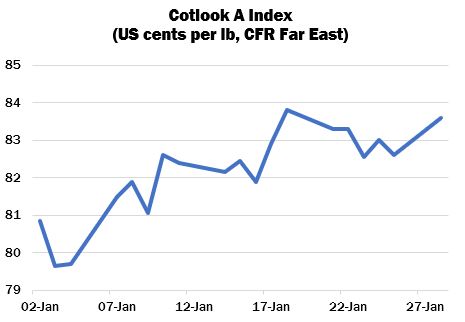 International cotton prices rose throughout January, influenced by the recovery of New York futures following their decline during the second half of December. The Cotlook A Index began the period on a weak note, briefly dipping below the 80-cent mark early in the month. Asking rates firmed in the intervening weeks, and the period ended with the A Index only slightly below its highest point of the month of 83.80 US cents per lb.

Prices were supported by the continuation of moderately active mill buying in the wake of the New Year holiday period. Lower offering rates stimulated the demand side of the market, and although the bulk of import buying was for nearby shipment, and volume purchases remained scarce, the improved trading conditions provided a welcome contrast to the persistently sluggish mood that had been evident until mid-December. Fixation of spinners’ outstanding on-call purchases were also a feature during period.

In the subsequent weeks, import buying was less active as prices moved off their recent lows. Many mills are thought to have covered their more pressing requirements around the turn of the year, and given the current macro-economic uncertainty, including the continuing Sino-US trade tensions, buyers were generally unwilling to add to their inventories. The most active business was conducted in the Indian subcontinent, where US lint was the primary focus. However, the protracted partial US government shutdown, which is currently on hiatus until February 15, when another shutdown will take place should a deal fail to be reached in Congress, prevented the release of a number of cotton-related reports, including the customary bellwether of international raw cotton demand, USDA’s weekly export sales report. Hence, the volume committed from that origin during the past few weeks remains the subject of market conjecture.

In late January, publication of the export sales registered during the week ended December 20 indicated that weekly export sales reached a marketing-year high in that period. As per the latest available data, by the day in question, the export commitment for shipment in the current season stood at some 10.8 million running bales (500 lbs) of both upland and Pima, representing over 70 percent of Washington’s December forecast for the season (USDA’s January supply and demand report fell victim to the shutdown), of 15 million statistical bales of 480 lbs. The missing reports will be released piecemeal over the coming weeks.

Marketing of the US crop is likely to have been facilitated by the rather muted nature of competition from Indian cotton of late, at least on markets outside the subcontinent. This season’s increased Minimum Support Price for seed cotton saw Indian lint occupy a less attractive position on export markets than competing growths, and production forecasts have shown a downward bias, reducing the size of the prospective exportable surplus.

A moderate uptick in Chinese import buying was evident in the first half of January, prompted by the relationship between local and import values which placed foreign cottons on a more favourable footing vis-à-vis domestic lint, as well as the approaching expiry of sliding-scale import quotas in late February. Chinese spinners turned to imports and stocks already consigned at ports, with Australian and Brazilian cotton attracting the bulk of interest. However, abundant local supply now available from the domestic 2018/19 crop may, barring a considerable shift in the relationship between domestic Chinese prices and imported cotton, serve to limit import demand against the 894,000 tonnes of 2019 tariff-rated import quota, allocation of which began in late January.

The possibility of import buying on behalf of the State Reserve has been the subject of continued conjecture, owing to the perceived need to ‘rebalance’ the quality composition of the government’s ageing raw cotton stocks, which were again reduced considerably during the 2018 auction series. The considerable tranche of Brazilian cotton delivered in the past couple of months, for example, is widely rumoured to be destined for the State Reserve.  China’s buying intentions may be affected by the outcome of the continued trade talks with the United States, which saw two further rounds during January.  A ninety-day moratorium on new tariff measures is due to expire at the beginning of March.

Government intentions with regard to sales auctions this year are also uncertain. In previous years, the auction of government stocks has been announced in January, and the series launched in March. However, this year the view is taken by many observers that auctions are likely to go ahead at a later stage in the season, to allow more time for marketing of the local crop.

Cotlook’s supply and demand figures for 2018/19 have undergone considerable changes of late, influenced by long-standing economic issues, as well as various weather events around the globe. Our forecast of world consumption has been reduced by 265,000 tonnes since our December estimate, to 26.11 million tonnes. However, production has been lowered almost commensurately, by 260,000 to 25.683 million. As a result, the margin by which world stocks are expected to have fallen by the end of the season has narrowed only very slightly, to 428,000 tonnes.

Our first, necessarily very tentative estimates of prospective supply and demand in 2019/20 will be published in late February. How recent price movements might influence farmers in the Northern Hemisphere remains to be seen, while little clarity is either evident on the demand side, where the downstream textile sector has been struggling to maintain profit margins for several months.