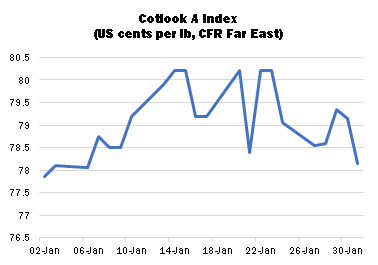 International cotton prices moved in volatile fashion during January, prompted by sharply higher and lower settlements in New York futures. Overall, however, asking prices remained within a higher range than that seen in the 2019/20 season so far. In the first weeks of the 2020 calendar year the Cotlook A Index continued the upward trend that had been in evidence during December, to register a high point of 80.20 US cents per lb on January 14, the first time the Index has risen above the 80.00 cent mark since May 2019. However, the Index subsequently moved erratically and ended the month on a weaker note, over two cents below its recent peak and just 70 cent points above its opening level. Prices were impacted by concerns associated with the potential spread of coronavirus, and the implications for both the domestic Chinese and world economies (share values and prices of commodities other than cotton also came under pressure late in the month).

The initial strength in futures prices was associated with the perception that Sino-US trade relations were on a more stable footing following the Phase One trade agreement reached in mid-December. The formal signature of that agreement on January 15 did not result in a further increase of prices, apparently because the market had been anticipating said ratification and had already factored the implications into their price ideas. Moreover, in the second half of the month, public health fears in China weighed heavily on prices, despite the emergence of a fairly broad-based demand from various consuming markets. Spinners tended to buy for their nearby requirements when prices were on the defensive. Chinese mills in possession of 2019 Tariff-Rated import quota took the opportunity to use their remaining allocations, which can be used only for cotton for guaranteed delivery before the end of February. Much of that demand was met with competitively priced Indian cotton.  Allocation of the 2020 import quota is expected in the near term.

Generally, a good level of demand was directed to US cotton, and a marketing-year high for upland lint was noted in the last export sales report published during the month, with China named as the major destination. The volume of US upland cotton committed to China by the week ended January 23 was in the region of 2.09 million 480lb bales, representing slightly over 16 percent of the total volume committed to all countries. Of that volume, which includes a good proportion of high-priced contracts arranged some time ago, less than 28 percent had been shipped by the date in question. 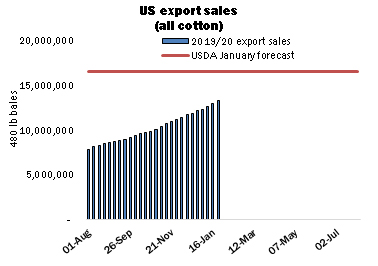 As part of the Phase One deal, China has promised to buy an additional US$32 billion tonnes worth of US agricultural products over the next two years (calculated by reference to a base year of 2017).  How much of a contribution cotton might make to that increase is open to question. Several factors could potentially thwart the conclusion of a particularly large volume of business. On current price relationships, imports of US cotton to China do not present an especially attractive prospect vis-à-vis domestic lint, particularly in light of the 25-percent import tariff which currently remains in place. The wording of the Phase One agreement includes the caveat that any purchases will be made ‘according to market needs.’ At the end of 2019, the country’s ‘commercial’ stocks (excluding mill stocks and those in the State Reserve) were the highest on record, at over five million tonnes. Hence for the time being, supply in China remains more than sufficient to meet spinners’ needs for the season ahead.

A substantial purchase of US cotton for the State Reserve could nonetheless be undertaken without payment of import duty, in order to fulfil the terms of the Phase One agreement as well as replenish state warehouses in China. The Reserve’s domestic procurement programme which began in December was inactive throughout most of January owing to prices deemed unattractive to sellers, and stocks in the State Reserve are currently estimated by Cotlook to be in the region of 2.25 million tonnes (27 percent of our estimate of consumption for the season).

On the global supply front, the major upward adjustments to our estimates of world output in January included increases for Brazil and Chad, of 28,000 and 21,000 tonnes, respectively. In the former country, our change was informed by official estimates, which continued to indicate that the remarkable increase in production achieved since 2016/17 will be consolidated in the year ahead. Meanwhile in Chad, a staggering ten-fold increase was noted, owing to new investment and liquidity that has reinvigorated cotton production in that country.

Partially offsetting those increases were reductions for the United States (22,000 tonnes) and Australia (20,000). The well-documented difficulties faced by the Southern Hemisphere producer have thus far persisted and the crop this season seems likely to fall to its lowest since 2007/08. Meanwhile for the US, Cotlook followed our customary practice at this late stage of the season of adopting Washington’s figure, which was impacted by higher abandonment in Texas.

As a result of the above changes, Cotlook’s January estimate of global production shows a slight rise on the previous month, to modestly more than 26,000,000 tonnes, representing an increase of just over two percent from last season.

A lower number was put forward for global consumption, of 25,510,000 tonnes. A major reduction of 50,000 tonnes was made to the figure for Vietnam, influenced by disappointing raw cotton import data during the early months of 2019/20. Smaller reductions were made for a number of other Far Eastern markets. 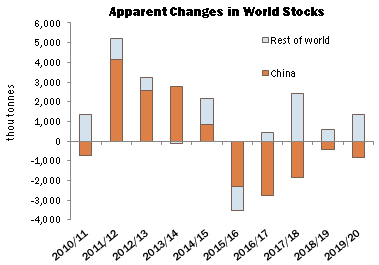