International cotton prices presented a more stable appearance throughout most of February than the previous month before collapsing in dramatic fashion as fears over the spread of coronavirus were amplified late in the period. The Cotlook A Index began the month on a modestly weak note: markets in China returned from the Lunar New Year holiday with a steep downward turn that was echoed in New York. That concern was largely tempered in the following weeks as factories in China began to reopen, and prices settled into a sideways trading pattern. The A Index reached a high point for the period of 78.30 US cents per lb. However, late in the month a renewed caution emerged as confirmation of further infections across the globe came to light, and several international events (including the China Summit, originally scheduled for late May) were postponed. Prices resumed their sharp downward trajectory. The spot month in New York fell by over 700 cent points during the last week of February, sending the Index into the low 70s cents per lb, below its nominal 30-year average of around 74 cents per lb. 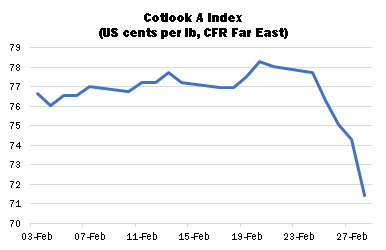 Business activity during most of the month was fairly cautious as spinners were for the most part reluctant to commit themselves to large volume sales or purchases further forward than around the middle of the year. The downstream sector remained sluggish despite the gradual reopening of factories across China: many manufacturers rely on Chinese exports for products such as dyestuffs and buttons, and enterprises although reopened continued to operate well below their full capacity. Thus, spinners’ orders were negatively impacted and further concerns were raised regarding the potential for serious disruption to supply chains should the virus fail to be contained in the next month or so.

However, the considerable price downturn in the last portion of February proved steep enough to tempt buyers back to the market, and a very active demand was witnessed from a broad range of countries as offering rates fell sharply in sympathy with New York.

Even before the collapse of prices at the end of the month, US cotton had been selling freely on a broad range of markets. In the first half of the period, two consecutive weekly marketing-year high sales figures were published, and the hitherto disappointing pace of shipments also showed a marked improvement. Confidence that USDA’s forecast for the season (16.5 million bales of 480 lbs) increased.

The possible scale of China’s appetite for US cotton has been a topic of market conjecture. On February 14, the ‘Phase One’ bilateral trade agreement came into force, a month after its ratification in Washington. The deal commits China to a substantial increase in purchases of US agricultural commodities, including cotton, but no commodity-specific targets are mentioned in the text. During February, US export data revealed some moderate new sales to China but also disclosed some cancellations of existing contracts. An additional 25-percent import tariff (introduced in July 2018) remains in force on Chinese imports of US cotton, but late in February Beijing announced that raw cotton and cotton yarn were included in an extensive list of products for which buyers could apply for a tariff exemption. Traders are also alive to the possibility that government-inspired purchases of US cotton could at some point be made by or on behalf of the country’s State Reserve.

As usual, February marked the publication of Cotlook’s necessarily very tentative initial estimates of global production and consumption for the season ahead, in this case 2020/21.

The starting point for our US production figure was the outlook for acreage as put forward by the National Cotton Council’s Planting Intentions survey. Average yield and abandonment are anticipated in most states (with the notable exceptions of Texas and Oklahoma, where abandonment can vary extensively), meaning Cotlook’s first estimate implies the second-largest crop of the last decade, at more than 4.4 million tonnes (20.3 million bales of 480 lbs).

Our production figure for China implies a small reduction from the current season, owing almost entirely to lower planted area outside Xinjiang. The decline in recent seasons of production from eastern provinces looks set to continue, whereas the Xinjiang Autonomous Region continues to enjoy strong government support.

India’s Minimum Support Price remains a boon to cotton production in that country and planted area is expected to be about maintained, monsoon rains permitting. However, slightly lower yields are expected. Meanwhile, a modest upturn is anticipated for yields in Pakistan, but some fields are expected to be diverted to sugar cultivation. African Franc Zone producers, conversely, should at least maintain their area in 2020/21, in the absence of alternative viable cash crops.

As always, Cotlook’s forecast of production in the Southern Hemisphere this far ahead of the planting window will remain subject to extensive revision as the picture becomes clearer. However, at this very early stage, our figures reflect that the dramatic increase in output seen in Brazil during recent years is likely to be consolidated. In Australia, the drought that persisted throughout most of 2019 appears at last to have relented somewhat and reservoirs are partially replenished. Something of a recovery in output is thus suggested for 2020/21, albeit from a 2019/20 outturn forecast to be the lowest for more than a decade.

Taking the above figures into account, Cotlook’s initial forecast of world production in 2020/21 is placed at just over 26 million tonnes, only marginally above the figure for the current season.

Assessing the outlook for consumption always presents a difficult task and is made more challenging this year by uncertainty regarding the duration of the coronavirus outbreak and its impact on commercial and industrial activity not only in China but also in the rest of the world. For now, we suggest that Chinese consumption will recover to 8.3 million tonnes in that country, on the assumption that the disruption witnessed this season will have abated by the middle of this year.

Outside China, consumption is expected to expand modestly in the Indian Subcontinent and in certain Far Eastern countries. The figure for global consumption in 2020/21 is therefore placed at 25.9 million tonnes, representing the first increase since the 2017/18 season, and a resumption of the long-term upward trend. That cautious optimism may prove misplaced if the worst fears regarding the economic impact of a global pandemic are realised.