December saw a continuation of the recovery in world prices that began in early April. The Cotlook A Index advanced by 480 cent points to end the month at 84.60 cents per lb, its highest point of the calendar year, representing a gain of 43 percent from the low point of 59.15 cents per lb recorded on April 2, when the effect of the Covid pandemic was at its most acute. 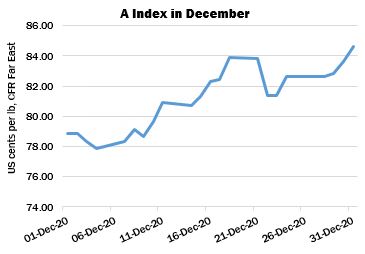 New York futures once again led the advance of upland prices in December, a trajectory that was interrupted only briefly when New York fell sharply on December 21 as news emerged of a new and more infectious strain of Covid-19. Speculative buying of the No. 2 contract remained a feature, as financial markets continued to respond to the monetary stimulus provided by the US Federal Reserve and other central banks. Share indices touched new highs during December. 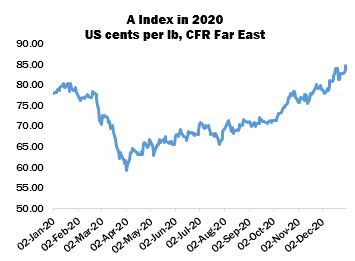 In the physical market, support in the form of active mill buying was forthcoming from a number of major import markets. Motivated by a continued disparity between local prices and the substantially more competitive offers of imported cotton, Chinese mills and traders (including state-owned enterprises) were active buyers throughout the month. The same price relationship precluded the commencement of the planned programme of State Reserve purchases from the domestic crop.

Import purchasing, from China and elsewhere, focused largely on US cotton, though not to the exclusion of other origins. The four weekly export reports released during December added about 1.59 million running bales (about 360,000 tonnes) to this season’s commitment (upland and Pima combined). By December 24, sales of all cotton had moved slightly ahead of last season and were equivalent to nearly 82 percent of Washington’s forecast for the marketing year. At fifteen million statistical bales of 480 lbs, that projection may now appear rather conservative.

The broad-based mill demand reflected the replenishment of mill inventories of raw cotton (as well as those further down the supply chain) that had been kept to a minimum owing to apprehension with regard to the future pattern of demand. Chinese import demand for cotton yarn (also a function of the price disparity alluded to above) provided a boost to spinning activity on many markets. Several major textile and garment manufacturing countries published robust export data and, overall, the impression remained of a revival of the cotton-textile supply chain, from which spinners were benefiting. Consumption estimates thus showed an upward bias.

On the supply side, the reverse was true: December witnessed lower production forecasts adopted by Cotton Outlook for the United States and India.

USDA’s December supply and demand estimates included a long-anticipated reduction to the domestic production forecast. In the event, the scale of the adjustment – over one million bales, the result principally of a lowering of yield estimates for the state of Texas – exceeded expectations.

Thoughts that an early and abundant Monsoon, coupled with a record area under cotton, would result in a bumper Indian crop have been tempered somewhat. Excessive and protracted rainfall has caused damage in some producing states, most notably Telangana, and overall production forecasts have been revised downward.

The combination of reduced production forecasts and an improving consumption outlook provided support to the continued price rally from a fundamental supply and demand perspective. In December, Cotton Outlook’s monthly production and consumption estimates for the first time indicated a net reduction of world stocks during the 2020/21 season. At 325,000 tonnes, the decrease is dwarfed by the previous season’s addition to world stocks (not far shy of four million tonnes) but nonetheless contributed to a noteworthy shift of sentiment to the bull side. 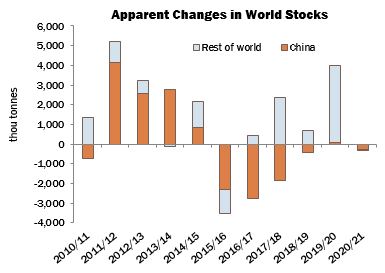