The recovery in international cotton prices that began in early September was maintained as the year-end approached. Under the lead of New York futures, the Cotlook A Index ended the month at 78.35 cents per lb, having recovered by over 13 percent since the low point of the calendar year. The final value of 2019 thus marginally surpassed the average for the previous twelve months of 77.80 cents per lb. 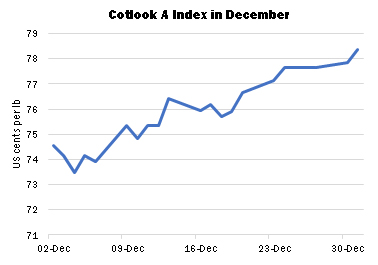 The consolidation of this upward trend during December was attributable principally to developments in the protracted Sino-US trade dispute.  Sentiment had for some time been influenced by indications that progress was being made. Towards the end of the year, these crystallised into the prospect that an interim (Phase One) agreement could be signed while consideration of some of the more intractable bilateral issues was deferred. In particular, the prominence in statements relating to Phase One of Chinese purchases of US agricultural commodities began to capture the imagination of US cotton shippers and participants in the futures market. 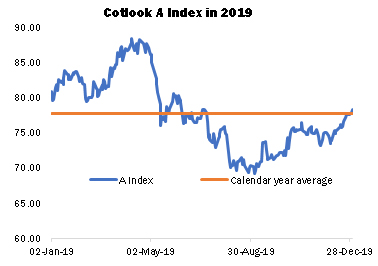 New York rallied strongly on December 12 as reports began to emerge that a Phase One agreement had indeed been concluded. The deal (which has yet formally to be signed) contemplates a substantial increase in Chinese purchases of US agricultural products, calculated from a base year of 2017.  In that year, China imported 505,000 tonnes of US cotton, with a value of some US$980 million.

Additional details (such as a breakdown by individual commodity) were lacking during the remainder of the month. As far as cotton is concerned, uncertainty surrounds the manner in which additional purchases could be engineered by Beijing.  The most straightforward means would be a substantial acquisition on behalf of the State Reserve.  Import purchasing decisions by individual mills are of course taken principally on the basis of price and quality (and for most spinners require access to import quota). Moreover, for the time being, the punitive import tariffs on US cotton introduced in July 2018 remain in place. These uncertainties notwithstanding, the shift of market sentiment by the end of the month was palpable.

Developments on the Sino-US trade front coincided with a significant shift stance of speculators in the New York futures market. In mid-December, their position moved to ‘net long’ of cotton futures for the first time in some six months. The size of that net long margin had increased by December 24.

China’s Zhengzhou cotton futures market also responded positively to the partial accommodation between Beijing and Washington. The rise in New York during December (5.6 percent, basis the March contract) was almost matched on the ZCE platform (the heavily sponsored May delivery rose by 5.3 percent during the month). Cotton prices in the physical market also moved higher.

In terms of cotton supply and demand, the justification for a bullish response in China was less transparent, as the prospect of increased US imports would add to an already more than comfortable local supply position: a substantial carryover from the 2018/19 crop remains available and ginning of the current season’s outturn is well advanced. On the demand side, the downstream textile sector would of course stand to benefit from any easing of bilateral trade tensions. Whatever its rationale, one consequence of the upward trend was a waning of interest in selling to the State Reserve.

On December 2, a series of buying auctions commenced, at which the Reserve invited daily offers from sellers of Xinjiang high grades. The process envisages the acquisition of up to 500,000 tonnes by the end of March. The first week saw purchases amounting to more than 64 percent of the maximum possible weekly amount (35,000 tonnes), but during the remainder of the month selling interest dwindled as the rally in the local market was consolidated.

The steady improvement of world prices during the later months of the year has been underpinned by changes to this season’s global cotton balance sheet during the period. Crop forecasts in several major producing countries were reduced further during December.

On December 10, the US Department of Agriculture reduced its domestic production forecast by 610,000 bales of 480 lbs (133,000 tonnes) to 20.21 million (4.4 million tonnes), principally to reflect a lowering of estimated yields in the state of Texas.  Since estimates of domestic consumption and exports were left unchanged, projected US ending stocks at the end of the season fell commensurately on the month to 5.5 million bales. Although more manageable than the 7.2 million bales indicated in the Department’s September supply and demand report, the revised carryover would still be the highest since the 2008/09 season.

Other downward adjustments to Cotlook’s December production forecasts involved Turkey (where yields have proved even more disappointing than earlier supposed) and Australia (where the possibility of a dryland crop has disappeared in the face of the relentless drought).

Our forecast of world consumption was unchanged on the month, amid some tentative signs of improvement in the fortunes of spinners on certain markets.

As a result, the margin by our estimates indicate that world production is to exceed consumption during the 2019/20 season was reduced during December by almost a quarter of a million tonnes. Although still significant at 389,000 tonnes, the figure no longer sends an unequivocally bearish signal.  Indeed, by the close of the year, market sentiment appeared to have undergone a significant shift toward the bull side. 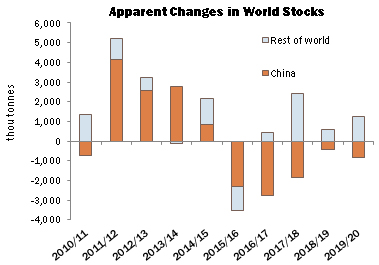