International cotton prices followed a rising trend overall in August, although speculative optimism on the New York ICE futures platform was punctured mid-month by a bearish supply and demand report from the USDA. Nevertheless, by the end of August, the December contract had broken through the threshold of 65 cents per lb, a level not seen for six months, and had made a net gain of 2.5 cents per lb. The Cotlook A Index began the month at 69.55 US cents per lb, and reached a low of 68.2 cents before climbing again to close the period at 71.1 cents per lb.

Supply and demand dynamics, particularly as regards the US crop, contributed to market movements, of course: the WASDE report from USDA released on August 12 included an increase of 600,000 bales to the forecast of domestic production and is credited with sending the December contract to its lowest position for the month. Then, as August drew to a close, renewed Chinese buying of US cotton together with concerns about the potential impact of two hurricanes approaching the Gulf of Mexico stimulated buyers and lent support to rising prices. The production and consumption matrix alone cannot account for the entirety of the gain, however. In fact, prices have been rising more or less steadily since their nadir at the beginning of April, during which time they have recovered by about 30 percent. While mill activity, and associated buying (though generally of origins other than US), do continue to improve, the overall rise seems to have more to do with support from the governments of several major economies for financial markets (from which commodities benefit indirectly, gaining value as share values increase) than with any transformational shift in the dynamics of supply and demand.

Reports from various markets suggest that spinning activity by the end of August had recovered to about 75-80 percent of normal, and purchasing interest – particularly for Brazilian cotton – had improved markedly. Nevertheless, buyers still tended to focus on the nearby delivery period, and enquiries further ahead remained relatively infrequent.

One of the most significant developments during August was the successful progress of auctions held by the Cotton Corporation of India. By August 24, when the sales were momentarily paused, around six million bales (from a total government holding, including stocks controlled by the Maharashtra Cotton Federation, of about 13 million) had been dispersed, mainly to local buyers attracted by discounts on bulk purchases, limited domestic supply and the high quality profile of CCI’s stocks. The sales have effectively placed a floor underneath Indian prices for the time being and have quietened the worst of the fears expressed in certain quarters about the potential for a huge oversupply of Indian cotton to undermine the global price structure. Meanwhile, a further 194,458 tonnes were sold from the State Reserve in China during the month, taking the total this year to 383,690 tonnes by August 31.

The first month of the new season also saw US exports develop some improved momentum as renewed buying from China in particular pushed the sales figure to 6.85 million running bales (including almost 2.9 million carried over from the previous season), already marking 48 percent of the USDA export estimate for the entire marketing year (15 million 480-lb bales).

During the 2019/20 season as a whole, upland exports totalled 14,174,500 running bales, compared with 13,158,900 recorded in 2018/19. Vietnam maintained its 25-percent share of the sales, but commitments to China increased by 83 percent from the previous year to restore the latter country to its position as second-largest purchaser of US cotton. 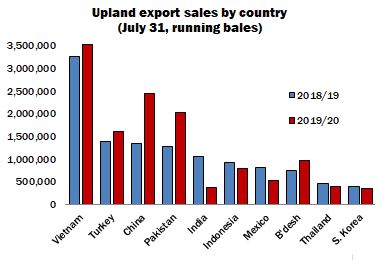 Changes to Cotlook’s estimates of global supply and demand during the month resulted in a higher production figure and unchanged consumption for the 2020/21 season. For production, substantial increases for India (reflecting record area and rainfall this season) and the US were partially offset by a collapse in the outlook for Mali, where farmers have effectively boycotted cotton this year in protest at lower seed cotton prices and other grievances. Smaller adjustments were made for other countries in the African Franc Zone and Azerbaijan, with the result that production is now pitched at 24,616,000 tonnes, which would represent a reduction of 4.5 percent from the output in 2019/20. At this early stage of the season, the recovery in consumption is forecast at seven percent to 23,539,000 tonnes.
The above figures therefore imply a carryover of a further million tonnes at the end of the current season, in addition to the 3.8 million estimated for 2019/20.