International cotton prices declined sharply further in August. New York started the month on a steep downward trajectory and failed to recover any real ground in the succeeding weeks. The ICE December contract registered several fresh life-of-contract lows during the period. The Cotlook A Index began the month at 74.80 US cents per lb, before losing several cents to fall below the threshold of 70.00 US cents per lb for the first time in well over three years. The Index registered its low point of 69.30 cents towards the end of the period. 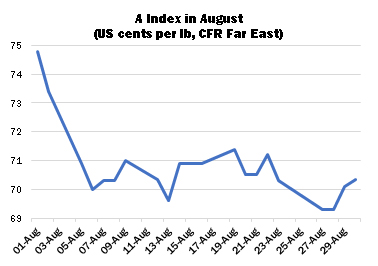 The fall in New York was prompted by a further deterioration of the trade relationship between China and the US, in the wake of July’s meeting in Shanghai, which eventually proved to be rather fruitless. An announcement from Washington confirmed that a further ten percent import tariff was to be imposed on US$300 billion of Chinese goods from September 1. China’s Ministry of Commerce soon announced retaliatory tariff increases on two tranches of US imports, to be implemented on September 1 and December 15.  The additional tariff on raw cotton is to be raised from 25 to 30 percent on the latter date.

The further cheapening of raw cotton replacement costs failed to prompt a considerable improvement in business activity during the month. Mill demand remained somewhat stifled by continuing macro-economic uncertainty; spinners generally were not keen to add to their stocks, while merchants were acutely aware that the sustained downward trajectory of prices has rendered more precarious the prospects for fulfilment of high-priced contracts agreed earlier in the year. US ‘recaps’ and Brazilian lots attracted relatively steady demand from mills in need of cover, but volume purchases were scarce. Forward demand was more sporadic.

Import demand from China remained at a low ebb. Local prices declined during the month in similar fashion to international values, and domestic raw cotton stocks are ample to supply spinners’ needs through to the movement of the new crop. Uncommitted supplies available from the local market, including mill stocks, amounted to nearly 3.6 million tonnes at the beginning of the month. In addition, almost 242,000 tonnes were offered via the State Reserve auction, around 70 percent of which was taken up, bringing the cumulative total sold during the 2019 series by the end of August to over 770,000 tonnes.

US export sales commitments registered in the first full week of the new season (ended August 8) were impressive, but the volumes in the intervening weeks were of more routine proportions. The cumulative volume committed by the week ended August 23 was over 8.5 million bales (480lbs). However, it is assumed that a considerable portion of those sales included high-priced contracts for China that had already been carried forward from 2018/19 in the hope of a resolution to the trade conflict. Given the potential scale of Chinese cancellations as the season progresses, USDA’s export projection for the season of 17.2 million bales may therefore prove to be somewhat optimistic. 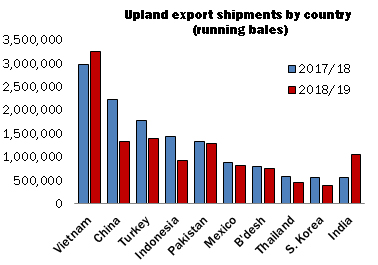 Changes to Cotlook’s estimates of global supply and demand during the month resulted in lower production and consumption figures for the 2019/20 season. On the production front, the major change was made to our figure for the United States; the crop was increased to 4.9 million tonnes, in line with the figure put forward by USDA in its August assessment of supply and demand. That would represent the third highest output on record. The change was prompted by a modest increase in area and slightly higher yield expectations. However, Tropical Storm Dorian, which is approaching the Florida coast at the time of writing, could severely impact fields in parts of the Southeast. The path of the storm will be watched closely in the coming days.

In China, attention has of late been on the sustained high temperatures ruling over parts of the major Xinjiang growing region. Elsewhere, our assessment of Brazil’s 2018/19 crop was edged upwards in line with the official forecast, while earlier fears that Indian output may be impacted by deficient Monsoon rainfall were largely allayed with the receipt of widespread moisture during August and planting data that pointed to an area similar to that sown last season. Hence, the figure for India remains unchanged for the time being.

As a result of these adjustments world output was reduced by 51,000 tonnes, to 26,679,000 in Cotlook’s August assessment. As for consumption, the protracted macro-economic uncertainty that has for some time characterised the global trading environment continued to weigh on mill activity, resulting in a further decrease to our number. Growth of just 1.6 percent is now envisaged between the 2018/19 and 2019/20 seasons, to see Cotlook’s estimate placed at 25,719,000 tonnes. The above figures imply a considerable carryover at the end of the current season, of 960,000 tonnes.