International cotton prices regained some ground during April, owing to higher settlements in New York futures. The Cotlook A Index fell to its low point of 59.15 US cents per lb on April 2, before reversing direction to move higher for much of the rest of the month. The Index reached a high point of 66.50 cents per lb on the last day of April, a full five cents above its opening level, and its highest point since March 19.  At that point, the Index’s decline in the calendar year so far stood at roughly 15 percent, compared with 28 percent a month earlier. 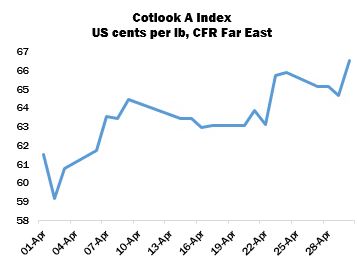 The slowdown in economic activity that was sparked by measures to contain the spread of Covid-19 continued during April and fresh mill demand for raw cotton ground to a virtual standstill. Cotton merchants for their part were predominantly concerned with managing the financial strain of requests from mill buyers to delay shipments and payments against existing purchase contracts. Mills across the globe were either closed for much of the month, or operating at significantly reduced capacity, as they too were facing cancellations from customers in the downstream textile sectors. This garnered some press attention, with several large European retail groups attracting criticism for their handling of the crisis, and failure to support garment manufacturers in developing nations, most notably Bangladesh. Various economic support packages were announced by central governments, in an attempt to mitigate the impact of the pandemic, but the scale of demand destruction remained the major concern for all sectors of the cotton value chain during the month.

The sharp advance of the No. 2 contract on April 22 was attributed to reports of Chinese buying intentions: the trade has been anticipating a significant purchase of US cotton since ratification of the Sino-US Phase One trade deal in January. The depression of the world market would provide an opportunity to replenish and rebalance, from a quality perspective, the now ageing stocks in State Reserve warehouses at advantageous prices.

In the event, the last US export sales report issued during the month revealed quite impressive new sales to China, amounting to roughly 125,000 tonnes, but widely credited to a state-owned trading company rather than the Reserve. The pace of US shipments (to all markets) declined during the course of April to below that required to meet USDA’s projection of exports for the season. On April 9, USDA reduced its export projection from 16.5 to 15.0 million bales (of 480 lbs), which contributed to a rise in the Department’s forecast of US ending stocks from 5.1 to 6.7 million bales, which would be the highest ending stock since the 2007/08 season.  The Department also substantially reduced its world consumption estimate for the current season. Nevertheless, following two weeks of net reductions to the aggregate sales figure mid-month, the latest report provided some much-needed relief from the almost unremittingly negative prospects for global demand in the duration of the current season, and perhaps beyond. The trade continues to anticipate volume purchases on behalf of the State Reserve, any indication of which will be followed keenly from all sides.

The widespread curtailment of spinning activity saw Cotlook’s estimates of raw cotton consumption in the current season undergo further extensive reductions in April, amounting to over 700,000 tonnes. The aggregate decrease over the past two months is therefore slightly over 2.75 million tonnes, bringing our assessment of world consumption to just below 22.5 million (representing a decline of about eleven percent from 2018/19). All of the major consuming markets experienced cuts to their consumption figures in the past month.

The latest revisions indicate a rise in world stocks of no less than 3.5 million tonnes by the end of 2019/20, the greatest addition since 2011/12, the campaign that followed the period of record world prices and extreme market volatility.

The outlook for the 2020/21 marketing year is considerably more difficult to gauge and will depend both on the future course of the Covid-19 pandemic and the timing of economic recovery in major markets across the globe, no indication of which is yet in sight.

In keeping with the rather downbeat assessments of many economists, our April forecast suggests only a partial revival in raw cotton consumption next season, of 6.4 percent, to just over 23.9 million tonnes. The recent collapse of oil prices promises to keep man-made fibres on a competitive footing vis-à-vis cotton yarn, while the business outlook in China remains fairly gloomy and any recovery of economic activity seems likely to be a protracted affair. Some enterprises in that country are expected to extend their holidays beyond the May Day break. 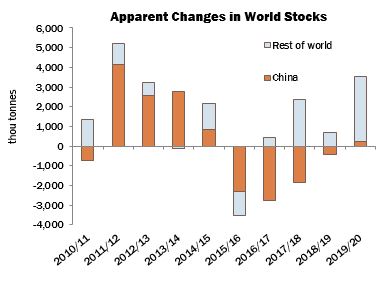 Production is placed at just below 25 million tonnes, representing a fall of 1.1 million tonnes from our initial estimate published in February. Sowing has already begun in some Northern Hemisphere locales amid expectations that the collapse of prices will lead to a fall in planted area in some countries, especially where those for competing crops are rising. In others, however, government support in various forms is likely to limit the scale of any decrease in cotton plantings.

Given the unprecedented situation currently faced by the global market, these early forecasts must be treated with even greater caution than usual. Cotlook’s latest figures currently imply a smaller but nonetheless significant addition to global stocks in 2020/21, of just over one million tonnes.