According to figures released by Alcotexa, in the week ending September 10, a further 3,024 tonnes were committed for export in 2022/23, bringing the total to 4,654 tonnes, over half of them for India. Shipments from the new crop have not yet begun. The prices registered for Giza 94 and Giza 86 were 218 and 211 cents per lb, respectively, for stocks from the old crop, and both were quoted at 232 cents per lb for new crop supplies. 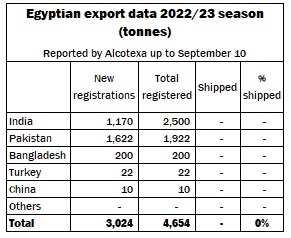