Planting is in full swing in the traditional cotton areas of eastern Australia. Farmers are keen to take advantage of the current conjunction of remunerative prices and ample availability of water. It is estimated that some 400,000 hectares of irrigated cotton and perhaps half as much again of dryland area. will be planted. A lint outturn of at least one million tonnes – a level not attained since the 2017/18 season – is forecast by most industry observers. 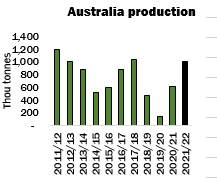 Conditions during the sowing period have been a little cooler than normal, thus the emerging crop has made a slower than expected start. However, no undue concern is expressed at this stage.
In addition to the customary producing regions in New South Wales and Queensland, it is anticipated that 30,000 hectares will be devoted to cotton in northern Australia, where sowing will commence in late December and continue into the new year.