You are here: Cotton Outlook | Cotlook Headlines | Another round of storms moves through Texas and southern Delta

Another round of storms moves through Texas and southern Delta

Another round of strong thunderstorms marched through West Texas last night, bringing hail, gusting winds, and light to moderate precipitation. Hailstones ranged in size from golf ball to tennis ball, and isolated tornadoes were reported. Many areas have received moisture over the past few days, and there is a 40 to 70 percent chance of light precipitation in the near-term forecast. Although sowing activities have been hindered, the rain has been welcomed, especially in fields where seeds were dusted in the ground. As of May 17, a total of 1.14’’ of precipitation has fallen in Lubbock this month, raising the January 1 to May 17 cumulative amount to 4.61’’ (as shown in the accompanying chart). Nevertheless, groundwater table supplies remain short throughout the region, and timely rains will be required during the growing season to ensure healthy stands.

Stormy conditions also were reported elsewhere in the state yesterday, and moderate to heavy rains were received, along with gusting winds and some hail. Cloudy, cooler conditions are expected across most of South Texas today, and there is a 50 to 90 percent chance of thunderstorms in the near-term forecast, with precipitation amounts of between 1.50’’ and 2.50’’ projected. Soils are already saturated in parts of the Upper Coastal Bend, owing to torrential rains yesterday, and consequently, any additional precipitation could cause flash flooding. Based upon the latest crop progress report released by the National Agricultural Statistics Service, 35 percent of the state’s projected acreage was sown as of May 16, which was 1 percentage better than the five-year average. Two percent of stands were at the squaring stage, and although the recent moisture will help ease water demands and enhance fruit development, it will hinder weed control.

Cloudy, near seasonable temperatures are expected throughout the Memphis Territory today. Light to moderate rain fell yesterday, with heaviest amounts recorded in Louisiana and southern Mississippi. Another round of storms is in the near-term forecast for parts of Arkansas, Louisiana, and southern Mississippi today as moisture from the Gulf of Mexico continues to be funneled inland. Many rivers, streams, and lakes are already overflowing their banks, and flooding has been reported in low-lying areas. There is a 50 to 70 percent chance of thunderstorms in the near-term forecast, and precipitation amounts from 0.75’’ to 1.50’’ are projected, which will exacerbate already rain-sodden fields and further delay planting. In Louisiana, the federal insurance deadline is May 25, and inclement weather this spring has hampered activities. As of May 16, only 39 percent of the seed was in the ground, which was 30 percentage points below the average. Open skies, therefore, is urgently needed to allow planting to proceed. Meanwhile, growers in Missouri made great strides during the week ended May 16, with sowing advancing by 55 points to 65 percent, which was 11 points better than the average. Arkansas and Tennessee followed, and plantings increased on the week by 26 and 21 percentage points, respectively, to 45 in the former and 24 percent in the latter. Work is nearing peak in Mississippi at 49 percent, just 2 points less than the average. Work, though, continues behind the normal pace in all states but Missouri. 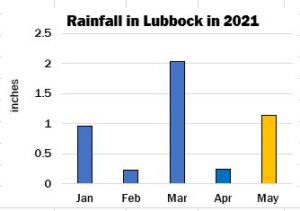