South Korea imported 13,614 tonnes of raw cotton during April, up from 12,725 tonnes in March but somewhat lower than the 16,110  recorded during the same month of last year. As has been the case in every month of this season so far, April’s arrivals comprised almost exclusively US (8,158 tonnes) and Brazilian lint (5,122). 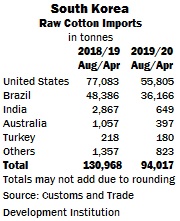