Data from the Export Promotion Bureau continues to be rather disappointing. Garment export earnings during October (the fourth month of the 2019/20 fiscal year) amounted to US$2.520 billion, nearly twenty percent lower than those in the same month of last year. The weak year-on-year performance recorded this month (and for the two previous months as well), contrasts with the impressive ten-percent increase seen in July.

Cumulative earnings for the four months, at US$10.577 billion, were 6.7 percent lower than in the corresponding period of 2018.

Woven garment exports shrank, year on year, by 7.7 percent to US$5.039 billion for the same period. The performance of the knitwear sector showed a smaller decline: earnings during July/October eased by just over 5.7 percent to US$5.538 billion. 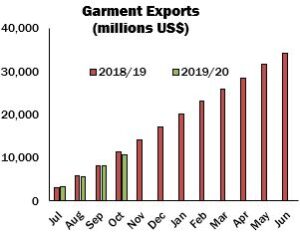